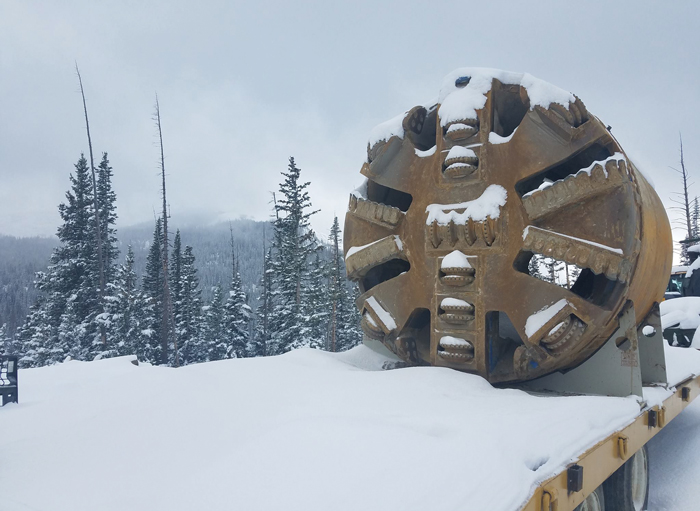 In the American West, water is a valuable and potentially scarce commodity, so when the City of Fort Collins, Colorado, was faced with a potentially costly repair to its water supply infrastructure, the mandate was simple: Fix it!

The Michigan Ditch is a 5.2-mile conveyance system that brings water from the high mountains into the Joe Wright Reservoir, one of the City’s two water sources. Over the years the Michigan Ditch, a combination of pipeline and open channel originally built around 1900 and bought by Fort Collins in the 1970s, was subject to the whims of Mother Nature. Specifically, one portion of the water supply route that crosses an area known as “the mudslide” was subject to periodic damage when the slides occurred.

The City was accustomed to making simple repairs that involved digging up the pipe and moving or replacing it when the slide moves. But in September 2014 crews noticed something unusual. The pipe, which typically moved only during snowmelt in the spring, had moved substantially since its repair that summer. The following spring, even more movement showed that a more permanent fix was needed.

“It was apparent that this wasn’t something that we could simply dig up and put back in place like previous years,” said Owen Randall, chief engineer for Fort Collins Utilities. “We knew we needed a long-term solution that could cost upwards of $10 million dollars. When I told the city managers their response was: ‘The water is worth $180 million, so go fix it.’ ”

In summer 2015, the City got to work with a geotechnical assessment that included seismic refraction as well as vertical and horizontal borings. Meanwhile, the City put together a team of consultants and contractors to help ascertain the best way forward. After exploring the options, the team decided that a tunnel that would re-route the aqueduct through the mountain in stable rock was the best solution. 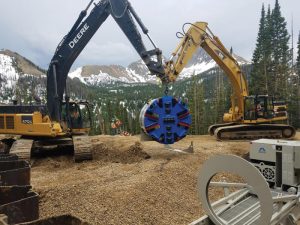 During the winter of 2015-16, the team – comprising City staff, Stantec (prime engineer), Lithos Engineering (tunnel design and construction manager) Hydro Construction (general contractor) and BT Construction (tunnel contractor) – began the process of finalizing the alignment and design. The end result was a 766-ft long, 98-in. OD, rib-and-board tunnel with a 60-in. ID carrier pipe grouted into place. The tunnel was built with a 630-ft radius curve to maintain an alignment in competent rock throughout its length.

The tunnel option provided the long-term solution that the City was looking for while having the added benefits of less maintenance, less environment impact and a construction cost comparable to other options.

Key to determining the final alignment were the horizontal borings, which were completed by Crux Subsurface, according to Robin Dornfest of Lithos Engineering. “Having the information from the cores helped us determine that a straight tunnel was not an option. The horizontal core along a straight alignment showed that the path crossed into the landslide materials. The additional cores along the curved alignment proved that the tunnel would stay in the rock profile.”

Building a Tunnel at Altitude

From the start is was apparent that this Michigan Ditch Tunnel was not your ordinary project. First and foremost, working at 10,000-plus feet elevation in the mountains meant that construction was largely dependent on the weather.

“The amount of snow in the mountains in the springtime basically determines when you are able to start construction,” Randall said. “Similarly, how soon its starts snowing in the fall determines how long we are able to work. The weather was potentially a huge issue as we were needed to get the ditch system online as soon as possible.”

The logistics of working on the side of a mountain also presented challenges. The project site was located 2.5 miles up a narrow, winding path that dictated the weight and the dimensions of the equipment that could be safely transported. Additionally, the nearest town (Walden, Colorado; population 3,000) was located 30 miles away, with Fort Collins 70 miles away. Even cell phone service had to be brought in.

“Due to the nature of the road, we were limited to about an 11-ft wide load,” said John Beckos, project manager for BT Construction. “We were unable to get a crane to the site, and the biggest excavators we could bring in were nearly hanging off the edge of the mountain on the way up.” 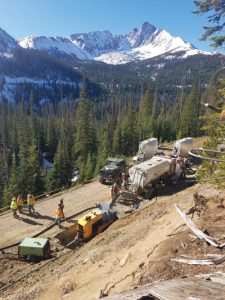 The site access also dictated the type of tunnel boring machine that could be used to excavate the tunnel. After evaluating the options, the project team elected to use an Akkerman hard-rock TBM that had a mixed face cutterhead to deal with the highly fractured, hard rock  and abundant fault and shear zones.

The machine was compact enough to accommodate the limited space at both the launch and retrieval pits, light enough to be handled by the available equipment, and had enough power to drill through rock that reached strengths of 15,000 psi.

“It was apparent that a neither conventional rock TBM or a conventional soft-ground TBM would be able to complete the drive, so we used a rock machine with a mixed-face cutterhead,” Beckos said.

The TBM was launched in June 2016 from a sheet pile with a thrust plate built using I beams keyed into rock and steel sheeting. The TBM was jacked into the tunnel followed by a section of steel casing that was grouted into the place and served as the starting point for the rib-and-board tunnel.

The tunnel was mined from the downstream portal to the upstream portal. The first 40 ft of the alignment was straight before it transitioned into the 630-ft radius curve spanning 726 ft. The TBM was equipped with a conveyor system and dual muck boxes to remove the spoil. Spoil was stockpiled near the site to be used by the City for future repairs to the ditch and pipeline, as well as the access road, which it maintains.

To achieve the curve, crews used shims between the ring beams and boards along the outer radius. The amount of curve was dictated not be by the TBM, but the deflection capabilities of the joints of the Hobas carrier pipe.

For the approximately the first half of the tunnel, production went well as no changes to the cutting tools were needed. However, advance ground nearly to halt about midway through the tunnel, requiring a series of tooling changes that left the team scrambling for spares.

“We hit a section of ground in which we were advancing inches per day,” Randall said. “It was a very frustrating situation because we knew that winter was coming and we needed to get the TBM through the mountain.”

Randall said the ground made tunneling a challenge. “The only thing consistent about the ground was that the rock was inconsistent,” he said. “We would find hard zones 2-3 inches thick, 2-3 feet thick and 30-feet thick. We knew we were going to get into difficult geology, but it still posed a challenge.”

The team had hoped to achieve an advance rate of about 20 ft per day. At the end of the job that number was 8 ft per day, but the TBM holed through successfully on Sept. 29. And, despite the challenging ground, the TBM holed through precisely on target. Project team members credited not only the TBM operators, but the VMT guidance systems, typically used for larger and longer tunnels, in keeping the tunnel on line and grade.

One of the keys to any successful tunnel project is proper planning. In the case of Fort Collins, its unique project delivery approach helped to implement a team quickly, and bring all parties to the table during the planning, design and construction phases.

Over the last 20 years, Fort Collins has implemented and refined its delivery system known as the Alternative Product Delivery System (APDS). Fort Collins retains a group of prequalified contractors and consultants on an annual contract basis – known as master service agreements – and when a project is needed, the City can call on its team of service providers with expertise in a particular area to negotiate a contract. This allows the City to quickly develop a team in developing the project from start to finish.

In the case of the Michigan Ditch Tunnel, the project team was brought on board to determine the best solution for the problem. As the project began to take shape as tunnel, the City negotiated further contracts for tunnel design, construction and TBM procurement. The project team additionally developed a risk register to help identify and mitigate potential occurrences that could impact the project.

“Rather than trying to write a contract for the whole project up front, we can write contracts that are very well defined knowing what our scope of work is going to be as planning and design progresses,” Randall said.

The added benefit of having the project team in place was that the project goals were defined by the team, rather than by an individual party or parties. “This was a very challenging and difficult project, but when you have everybody working toward the same goal it makes all the difference in the world,” Randall added.

“The team functioned at a very high level and with great communication,” Dornfest said. “It was extremely challenging, but there was never any finger pointing and we were able to get the job done on schedule and under budget.”

Thanks to planning, teamwork and determination, the Michigan Ditch Tunnel project was successfully completed approximately $1 million below the initial budget of $8.5 million. The aqueduct is now online, assuring citizens of Fort Collins a reliable source of water for the years to come.