In an effort to increase capacity to meet future demand, as well as allow greater system flexibility and reliability, the Los Angeles Department of Water and Power (LADWP) is in the process of constructing the River Supply Conduit Improvement Upper Reach – Unit 7 (RSC 7).

The project comprises approximately 2.5 miles of 78-in. welded steel pipeline, and is being constructed by Frontier-Kemper. In addition to the 11,755 ft main line tunnel, Frontier-Kemper’s contract includes a microtunneled connection as well as a 900-ft open-cut connection.

Frontier-Kemper Constructors Inc. was awarded the $121 million RSC 7 contract in 2018. The first section of work to be completed was a 500-ft microtunnel that traversed under the Los Angeles River from Forest Lawn Drive, adjacent to the famous Forest Lawn Cemetery, to the main TBM launch shaft and primary staging area for the project in Johnny Carson Park. The microtunneling machine was launched from a 60-ft deep, 30-ft diameter liner plate shaft completed in September 2019.

Crews used an 82-in. Akkerman MTBM, upsized to 104 in., and a mixed face cutting cuttinghead that included disc cutters and drag bits to combat the abrasive geology. The MTBM had an accessible face with rear-loading cutters, which allowed face access if needed.

The alignment started in the Topanga formation but quickly transitioned to the cobbly alluvium under the Los Angeles River. Crews experienced heavy wear on the slurry system while dealing with the difficult ground conditions, but managed to complete the drive in March 2020.

During the course of the drive, crews experienced challenges. While the mircotunneler and cutting tools emerged in good shape, the ground took its toll on the slurry line and pumps, requiring repairs and refurbishment to housings and fittings.

The main tunnel alignment comprises an 11,755-ft drive from the main launch shaft at Johnny Carson Park to a retrieval shaft near the intersection of Burbank Boulevard and Biloxi Avenue, under Whitnall Highway and LADWP high-voltage power lines.

The launch shaft, 60 ft deep and 50 ft OD, was constructed built using 4-ft diameter secant piles installed by Becho Inc. The shaft was completed in January 2020 in advance of the microtunnel drive. The retrieval shaft at Burbank and Biloxi is a 36-ft wide by 35 ft long by 60 ft deep beam and plate shaft.

Frontier-Kemper is using a tunnel boring machine from Herrenknecht to mine the tunnel. The TBM is a 13.5-ft OD, 11-ft ID earth pressure balance with bottom-feeding screw. The TBM will install steel reinforced segments as initial support, followed by installation of the 78-in. welded steel final liner and 800 psi annular space grout. Western Pacific Precast provided the segments, which were 4.5-ft long vs. the more typical 4-ft length in this size range to reduce cycle times for the contractor. 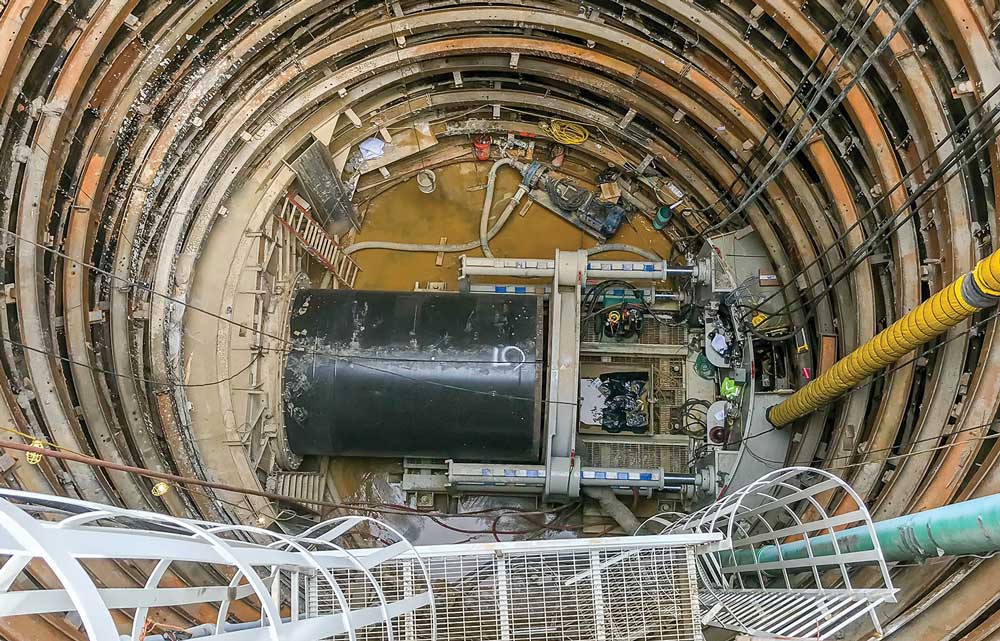 In advance of tunneling, Frontier-Kemper mined a 60-ft long, 14-ft diameter tail tunnel and an 84-ft long, 16.5-ft diameter horseshow starter tunnel. “Due to limitations on the size of the shaft in the park, we needed a starter and tail tunnel to give us room to assemble and launch the TBM,” said Robert Marshall of Frontier-Kemper. “The shaft was pretty complex with basically three tunnels: the starter and tail tunnels and the microtunnel which broke through into the shaft.”

For tunneling, crews experimented with the cutterhead configuration to best suit the challenging ground conditions expected along the tunnel alignment, which were expected to include sands and gravels about the water table. The TBM was also equipped with additional armoring to help navigate the abrasive materials.

As of late July crews had advanced, 6,600 ft of the main tunnel. Tunneling is expected the be complete by the end of the year. The overall River Supply Conduit Improvement Upper Reach – Unit 7 project is anticipated to be complete in mid 2022. The project is funded by the Drinking Water State Revolving Fund, administered by the United States Environmental Protection Agency and the State Water Resources Control Board.