You are at:Home»News»UCA Presents 2020 Awards

The Los Angeles County Metropolitan Transportation Authority’s Regional Connector project, being beuilt by a joint venture of Skanska and Traylor, was the Project of the Year winner.

John J. Reilly, P.E., C.P.Eng., has more than 56 years of experience in the management, design and construction of large, complex infrastructure and underground projects in the United States, Australia, Canada, United Kingdom, Europe, South America and the Middle East. In 1987, he established a consulting practice in the areas of management, design, construction, contracting methods, partnering, risk management and risk-based cost estimating. He has written more than 100 papers in these areas, has chaired numerous expert panels for metro systems, tunnels, highways and bridges, and has served on several national academy panels.

Henry A. Russell Jr., PE, PG, has more than 50 years of international tunnel experience. He worked for Parsons Brinckerhoff for 40 years, becoming the national program leader for tunnel rehabilitation and senior vice president. He currently works for Mott MacDonald as a principal tunnel engineer and vice president. He has written more than 40 technical papers on tunnel inspection, security, structural repairs and fireproofing. Since 1997, he has been an official delegate to the ITA Working Group 6-Repair and Maintenance of Tunnels, where he served as vice chair and chair. During this period, the Working Group produced three documents on tunnel refurbishment and tunnel fireproofing.

Russell has been a member of the UCA’s George Fox Conference steering committee since 2000, a
member of the American Society of Civil Engineers (ASCE) Tunnel Task force since 2015 and a keynote speaker at numerous conferences. His publications include chapters on tunnel rehabilitation in the Tunnel Engineering Handbook, TCRP Synthesis 23, and Federal Highway Administration manuals. He is also a member of The Moles and the Transportation Research Board.

Since joining Traylor Bros. Inc. in 1985 as vice president of the Underground Division, George Williamson has procured and supervised the successful construction of dozens of tunnel contracts. He received the 1999 Golden Beaver Award for supervision, which recognizes the top tunnel engineers and managers in North America. In his time with Traylor, he led the acquisition and construction of more than 40 underground projects throughout the United States. This includes multiple award-winning projects, such as the St. Clair Tunnel, the South Bay Ocean Outfall, the Los Angeles Eastside Light Rail Transportation Project and the Queens Bored Tunnels.

In addition to being director of special projects for Traylor’s Underground Division, Williamson sits on the board of directors and the management committees that direct strategic planning for the entire company. He is a member of the American Society of Civil Engineers, The Moles and a registered professional engineer in 10 states and the District of Columbia. He is a graduate of the University of California Berkeley.

The Outstanding Individual Award recognizes those individuals, including contractors, engineers, owners and suppliers who have made significant contributions to the field of tunneling and underground construction and to the Underground Construction Association.

Gary Almeraris has been involved in the underground industry for more than 40 years. He is a licensed professional engineer, a blaster and an engineering graduate of the City College of New York with a master’s in management from Worcester Polytechnic Institute. He is currently vice president of operations for Skanska USA Civil Northeast and is its leading underground expert.

He has worked primarily in the Northeast on large projects including transit, water supply, water power, combined sewer overflow (CSO) and highways, most of which include major underground work. Almeraris has managed the construction of several SEM caverns, utility infested cut-and-covers, and tunnels in rock, soil and mixed face driven conventionally or with tunnel boring machines. Additionally, he has managed varied support-of-excavation projects, including a number of frozen ground solidifications. Some of his more challenging projects have included the Big Dig, the Second Ave Subway, DC Water’s CSO program and the Fulton St./WTC transit hubs.

The Outstanding Educator Award is presented by the UCA Executive Committee to professors and teachers who have had an exceptional career in academia and education in the areas of underground design and construction.These individuals have also made significant contributions to the industry through their academic interests, as well as through the introduction of many student graduates into the industry.They are nominated by their peers.

In his engineering geology, geologic data methods, project management and case histories courses, he focuses on design and construction of underground openings. Mahar has been a thesis adviser to 12 graduate students, and two of the dissertations have been on computer simulation of loosening loads in rock tunnels and on prediction of squeezing behavior in fault zones and soft ground tunnels. He has received three teaching/mentoring awards and the 2010 professional achievement award.

Mahar has more than 47 years of consulting experience in design and construction on more than 200 projects involving underground openings in soil or rock. He received his Ph.D. from the University of Illinois in geology with an engineering geology and rock/soil mechanics specialty.

Project of the Year 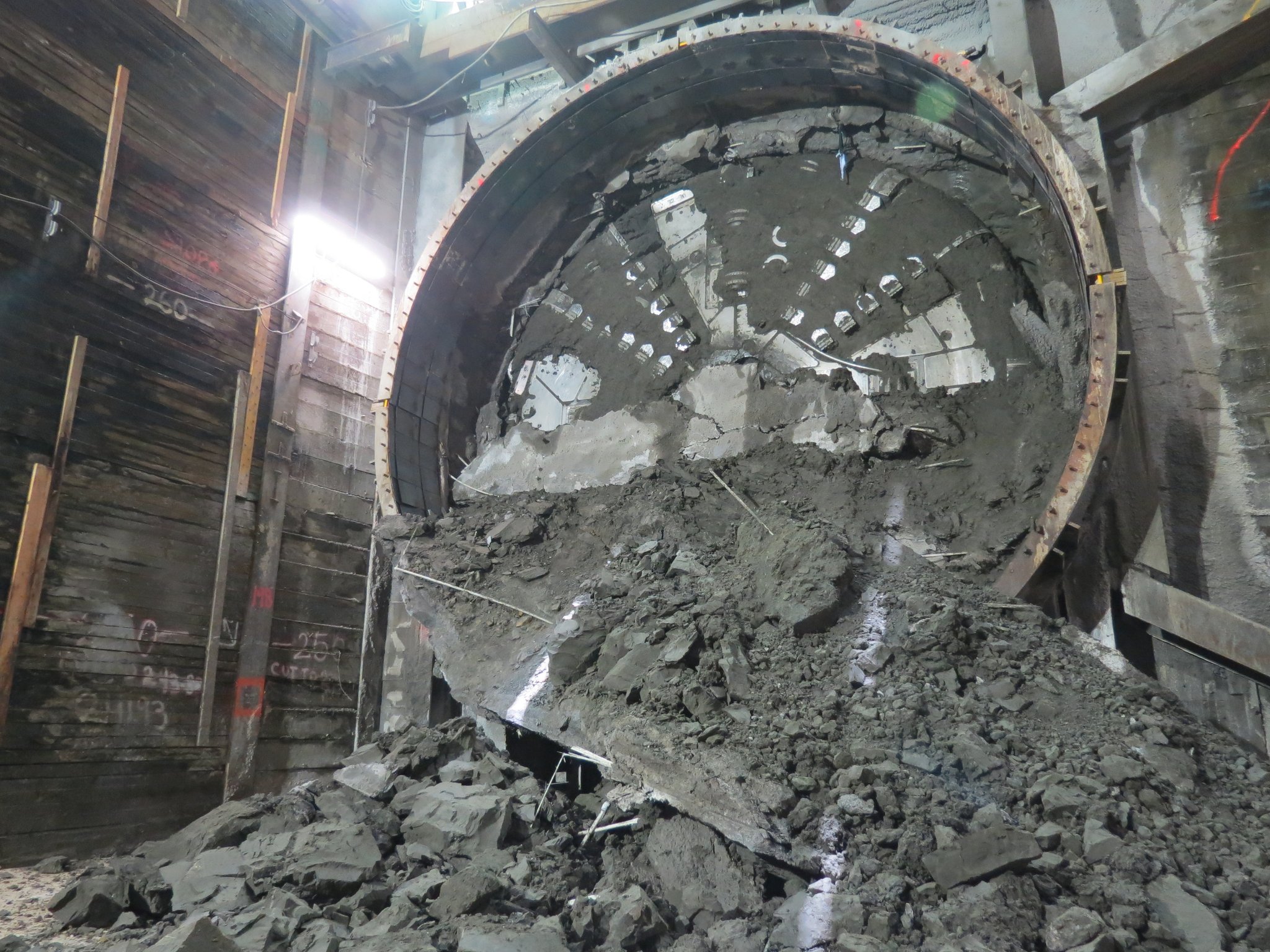 The Project of the Year Award recognizes an individual or a group that has shown insight
and understanding of underground construction in a significant project, which may include a practice, developing concepts, theories or technologies to overcome unusual problems within a project.

The Regional Connector Project was unique in that it required a variety of structures and construction techniques, including TBM tunneling, deep cut-and-cover excavation, large cavern sequential excavation method and underpinning in a dense urban environment adjacent to and/or underneath numerous iconic and historic buildings. Innovative solutions were considered and implemented across the project, from semi-automatic earth pressure balance (EPB) conditioning, monitoring, tie-back removal shaft and adit, cross passage support and underpinning.

The 3-km (1.9-mile) underground light rail project extends from the LACMTA’s Gold Line Little Tokyo/Arts District Station to the 7th Street/Metro Center Station through downtown Los Angeles. The project includes 2,880 m (9,450 ft) of 5.7-m (18 ft, 10-in.) twinbored tunnels and three underground stations. The project connects to existing lines and stations at both ends of the new track. The entire alignment is within potentially gassy ground conditions under downtown Los Angeles.

The Skanska-Traylor JV took over the in-progress advanced utility relocation contract as a change order at the outset of the project. A single TBM was used to bore both tunnel drives. Consultants involved in the project include WAP, Mott MacDonald, Arcadis, and EPC Consultants.

It was rebuilt by Herrenknecht (for its third journey) and modified to navigate the extremely tight radius
curves along the alignment. Traylor fabricated the precast concrete tunnel segments. Each of the twin tunnel launches was extremely challenging as the TBM mined through sandy materials with low cover 4.5 m (15 ft) underneath existing structures. Permeation grouting and compensation grouting were installed as a precaution. The owner/contractor team added a horizontal inclinometer (shape array) above each of the tunnel drives that provided settlement information 1.5 m (5 ft) above the TBM in real-time during mining.

Using tight EPB PLC controls and extensive instrumentation data, the team was able to keep the settlement under 0.2 percent volume loss and remain below the contractual settlement limits. While tunneling the first drive, the TBM encountered unexpected obstructions, two steel piles and 48 tiebacks that damaged the equipment. To recover from the delay, a third mining shift was added to the second drive. The tunnel crews set multiple records for L.A. Metro, including best single day production at 58 m (190 ft), and the project gained back two months on the schedule.

Excavating the 91-m long, 17.7-m wide, 11-m high (300-ft long, 58-ft wide, 36-ft high) track crossover cavern at a shallow depth in soft rock, beneath existing building foundations and major utilities and using the sequential excavation method was one of the most challenging parts of the project. Extensive design modeling, sensitivity analysis and daily review of field data led to the successful excavation and support of the cavern two months ahead of schedule and within the acceptable building settlements.

The Regional Connector was also award TBM’s Achievement Award winner, which will be presented at the Breakthroughs in Tunneling Virtual Short Course. You can read more about the project here.