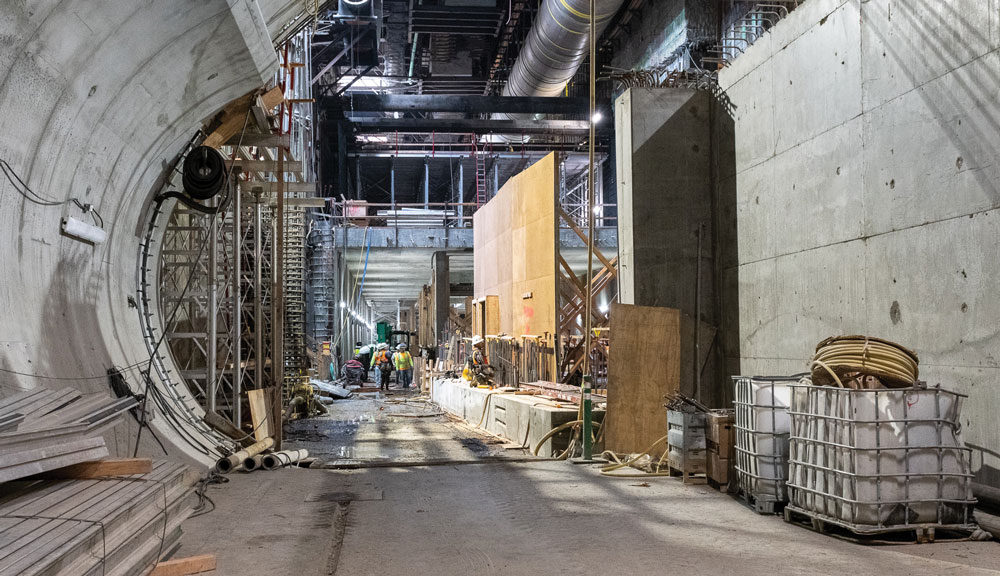 The Regional Connector project comprises a relatively short section of LA Metro’s overall transportation network, but it is central to its long-range vision and system interoperability. Upon its completion, the Regional Connector will allow passengers to transfer between the existing Gold, Blue, Expo, Red and Purple lines, while allowing a one-seat north-side ride from Azusa to Long Beach, and an east-west ride from Santa Monica to East Los Angeles, saving up to 20 minutes of travel time for commuters.

The new segment stretches 1.9 miles from the existing 7th Street/Metro Center Station to a new Little Tokyo/Arts District Station, with an additional two new underground stations in the heart of downtown. In addition to the interconnectivity, the project provides expanded access to Little Tokyo, the Arts District, Civic Center, the Historic Core, Broadway, Grand Avenue, Bunker Hill and the Financial District. 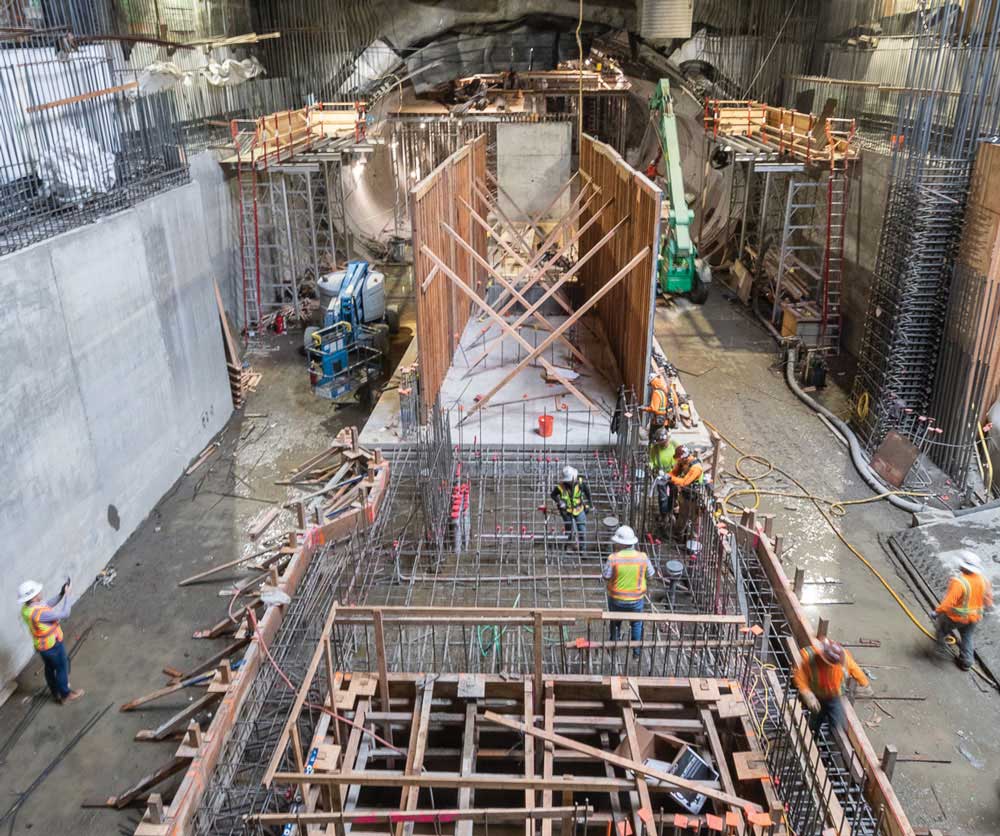 Currently, excavation and tunneling are complete, and crews are progressing toward a 2022 opening date. Because of the successful completion of underground work, teamwork, use of innovation to overcome challenges, and overall impact the project will play in the future of Los Angeles, the Regional Connector has been named the 2020 Tunnel Achievement Award winner. The project will be recognized during the 13th annual Breakthroughs in Tunneling Short Course, being held online Oct. 5-9.

“The Regional Connector will serve to fully integrate our transit system and provide more convenient access to Union Station, which serves as a gateway to other transportation modes such as Amtrak, our bus system and regional Metrolink,” said Gary Baker, Metro’s project manager for Regional Connector. “The three new downtown stations also provide greater access to people who commute and work downtown. As a result of the project, we expect to attract about 19,000 new riders. This is a project that has been long overdue in terms of providing connectivity for riders and making it more seamless in getting to outer reaches of the county.”

The Regional Connector is one of six major projects under construction by Metro. The $1.75 billion design-build contract was awarded in 2014 to Regional Connector Constructors (RCC), a joint venture comprising Skanska and Traylor Bros., with Mott MacDonald as the lead designer for RCC. Preliminary design was completed by CPJV (AECOM/WSP), which is also performing design services during construction. Metro’s Construction Management Consultant is Arcadis. 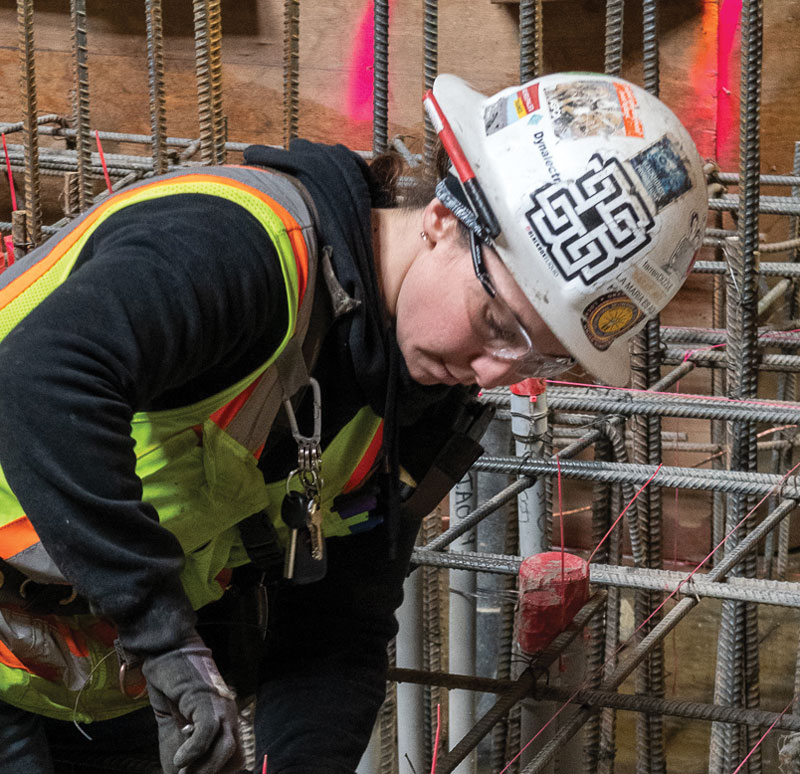 The tunneling portion of the Regional Connector involves 5,795 ft of twin tunnels with an excavated diameter of 21 ft. The ground conditions range from alluvium soils to clayey siltstone of the Fernando formation, with the potential for methane, hydrogen sulfide gas and boulders. The groundwater table is generally above the tunnel alignment. Pressure balance tunneling utilizing an EPB TBM was required, along with precast concrete segments with double gaskets as the tunnel lining system.

The tunnel depth (cover) ranges from 25 ft to approximately 120 ft and crosses below the existing Metro Red Line heavy rail tunnels with less than 7 ft of clearance. The Regional Connector includes approximately 2,100 ft of cut-and-cover and retained cut guideway, a 300 ft cross-over cavern excavated by the sequential excavation method (SEM), and three cut-and-cover subway stations. The bored tunnels were excavated by one Herrenknect TBM concurrently with the construction of the three stations, requiring coordination between the cut-and-cover operations and TBM tunnel excavation.

Any large-scale construction project in a major urban area is going to have its own set of challenges. This is especially true for underground alignments that must navigate a maze of existing infrastructure as well as potentially impacted third parties along the route.

For the Regional Connector, the first challenge involved selecting the most appropriate alignment. How do you attract the most ridership? How can you take advantage of existing rights of way to connect Point A to Point B? What are the physical constraints?

In exploring the options, it became apparent that tunneling along Flower Street was going to be particularly difficult due to the incursions from structural supports of high-rise buildings in the heart of the financial district. As a result, the design team opted to construct the tunnel via 1,400-lf cut-and-cover section along Flower St. 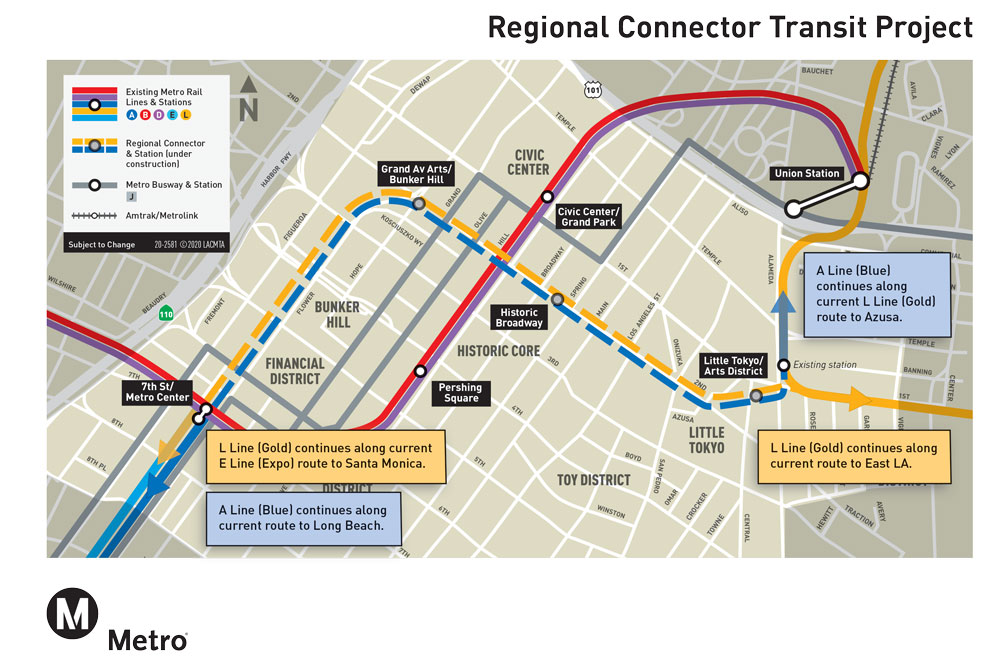 Additionally, the Historic Broadway Station near the middle of the alignment involves construction in private right of way. Metro had to reach an early agreement with a private developer that plans to construct a high-rise facility over top of the station.

“Designing our station structure to support an undefined building presented huge engineering and commercial challenges,” Baker said. “We have worked through those issues, and are still refining the design as the developer has finalized his plans. We have been able to work in concert with him and are now poised to complete that work.”

Dealing with stakeholders with unique needs provided engineering challenges to the design team as well. The Regional Connector is being built, and will operate and maintain service, adjacent to the Colburn School of Music, Walt Disney Concert Hall and the Broad Museum. To reduce operational noise and its impact on these sensitive stakeholders, the design team implemented floating track slabs – precast segments with rubber isolators – to reduce noise and vibration.

Metro implemented a monitoring program in the area to ensure that stakeholders were not impacted by construction, and will leave the monitors in place as operations begin to verify that thdesign predictions are correct. 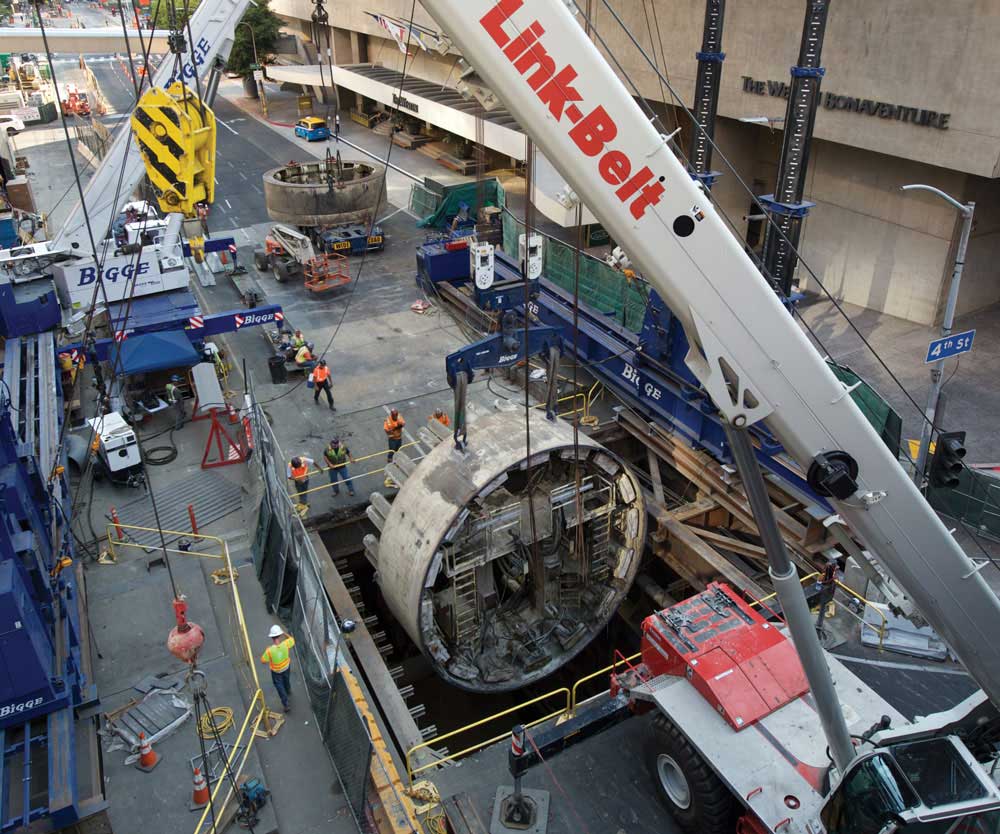 One of the first issues that Metro and RCC needed to address was the network of existing infrastructure along the alignment. Because the route traverses the historic downtown core of Los Angeles, the utilities – water, sewer, gas, electric, etc. – are among the oldest in the region. While the existence and location of the infrastructure was known, the condition was not always well understood.

“Many of the utilities turned out to be fragile and near the end of their service life, which made it difficult to handle during the cut-and-cover excavation,” Baker said. “That required us to redesign, replace or relocate significant portions of infrastructure, which had budget and schedule impacts. The lesson learned is that not only is it important to know the location of the utilities, but also their condition, particularly when you are dealing with old infrastructure.”

When it comes to tunneling, one of the biggest challenges to any project is unknown conditions or obstructions – natural or manmade – that can be lurking underground. During construction of the first reach of TBM tunneling, abandoned steel shoring piles remaining from previous building construction were encountered along the alignment. 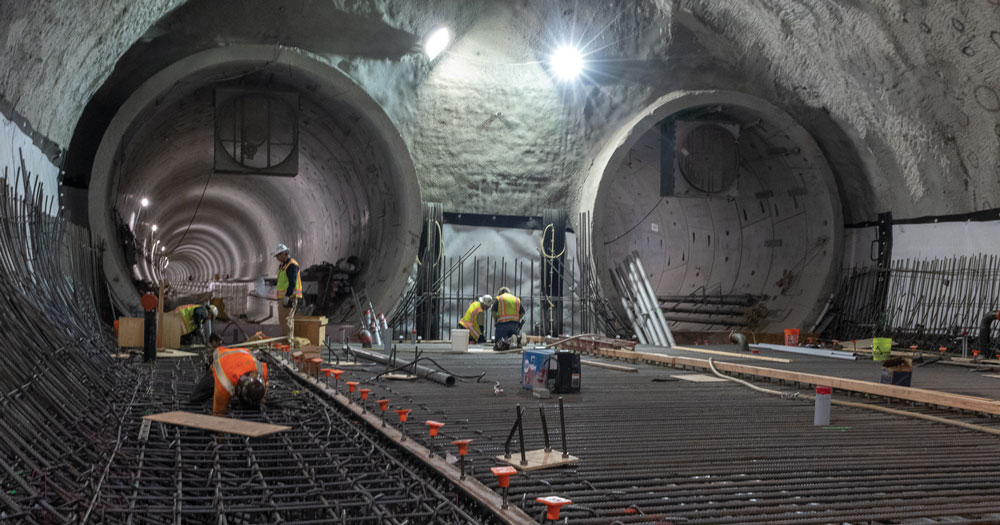 “TBMs aren’t made to excavate through steel supports, but with skillful operators we were able to mine through the piles, and then limp along until we completed the drive,” Baker said. “We had interventions to repair cutting tools during the drive, and then were able to make full repairs – including installing a new screw conveyor special-ordered from Germany – when the drive was completed. What could have been a show-stopper turned out to be a tremendous success. It is a testimony to how fast a public agency can respond in an emergency crisis and avoid long delays on a project. And, we were able to recover all lost time on the next tunnel drive.”

Ultimately for the Regional Connector to be successful it requires seamless integration with the existing networks with which it will connect. Implementing those tie-ins pose another challenge for the project team.

“The system integration involves decommissioning the existing Little Tokyo/Arts District Station and splitting the current L Line (Gold) into two different lines that converge underground,” Baker said. “In addition, we are interfacing with the existing 7th Street/Metro Center Station, which is a central transit hub downtown. We need to maintain operation of all the lines while making the connection and integration, sometimes with equipment and technology that dates back to the original construction 25 years ago.” 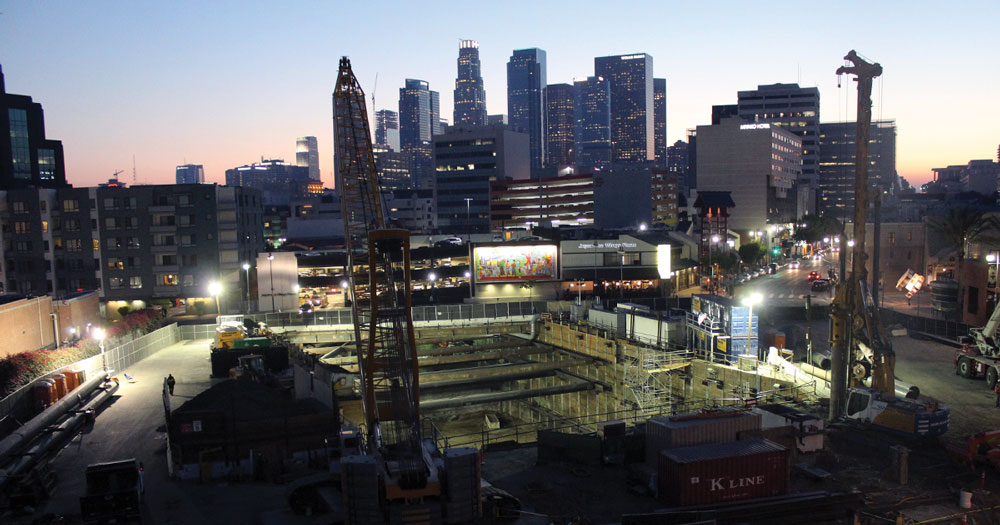 TTo overcome the challenges of launching the TBM in shallow alluvial materials and sensitive urban environment, the project team developed several unique approaches. Notably, the team pioneered the use of a Sequential Segmented Array (SSA) system to monitor potential ground loss in conjunction with the TBM mining. “Essentially, the SSA consists of inclinometers that are drilled in horizontally above the crown of the tunnel alignment, to provide real-time feedback to the TBM operator,” Baker said. “This system allowed us to determine potential ground loss much quicker than traditional monitoring equipment, and turned out to be a huge success on the job. In fact, by having data that allowed precise operation, we were able to complete the drive without the need for any compensation grouting.”

Another first for Metro was the use of SEM mining to construct the cross-over cavern at the Historic Broadway Station. Cut-and-cover construction of the cross-over cavern, measuring 300 ft long by 58 ft wide by 36 ft tall, was ruled out as an option due to building encroachments that extended into the public right of way.

In June, crews completed the last of the contact grouting to complete the cavern lining. “SEM is a method that needs to be carefully engineered and monitored during construction because of inherent risks with this construction technique,” Baker said. “The cavern construction has turned out the be a big success.” 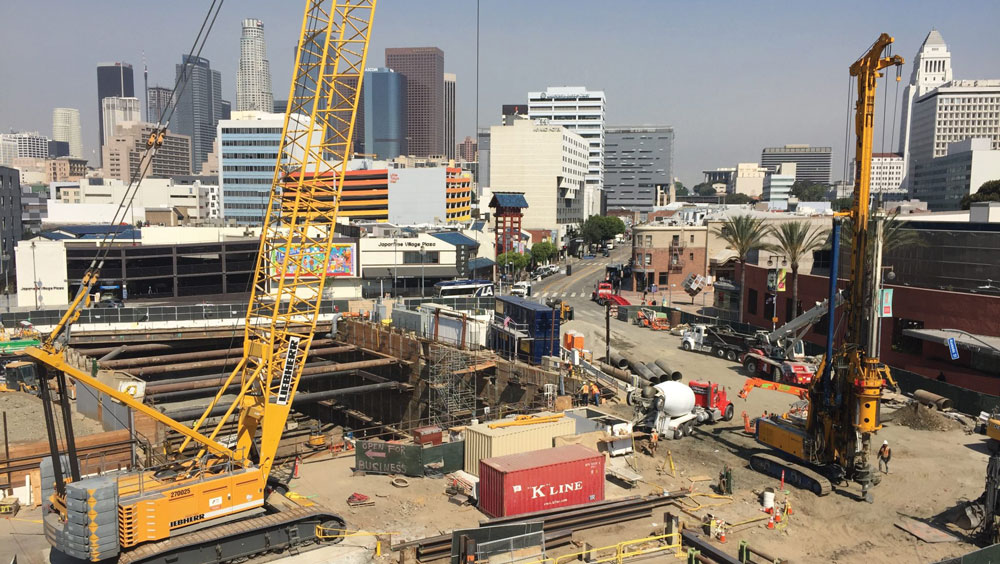 The Regional Connector construction is more than 75 percent complete to date with structural concreting under way and on pace for substantial completion early next year. Track work is also under way, with system installation, station finishes and testing still ahead. At this point, the team is poised to finish the project on time and on budget, according to Baker.

Established in 2012, the Tunnel Achievement Award recognizes projects that are successfully completed and demonstrate innovation and teamwork, and provide benefits to the community. The award is presented by the organizers of the Breakthroughs in Tunneling Short Course in conjunction with TBM: Tunnel Business Magazine.

The Regional Connector is one of several major underground projects underway in Los Angeles. Here is a quick look at Metro’s other notable endeavors.

Crenshaw/LAX was the first of the latest wave of projects with underground components to move forward. Crenshaw/LAX, with an overall budget of just over $2 billion, is an 8.5-mile light-rail line with eight stations that will run between the Expo Line on Exposition Boulevard and the Metro Green Line. NTP was issued in September 2013 with revenue service expected by 2021.

The project includes twin bore tunnels, about 1-mile long each, connecting three underground stations. The tunnel is 21-ft OD (19-ft ID) and is approximately 70 ft below ground. Ground conditions are soft ground/alluvial, leading to the choice of an EPB TBM.

The Purple Line Extension comprises 9 miles of twin bore tunnel section that will extend the existing line at its terminus at Wilshire/Western westward through Beverly Hills and into West Los Angeles. The roughly $9 billion program is being built in three separate phases.

Phase 1 – Phase 1 involves extending the Purple Line 3.92 miles from Wilshire/Western to a new station at Wilshire/La Cienega. It also includes stations at Wilshire/La Brea and Wilshire/Fairfax. The project includes the western retrieval shaft and 23 cross passages. The $1.636 billion tunnel and stations contract was awarded to a joint venture of Skanska, Traylor Bros. and J.F. Shea Co. in 2014. The forecast completion date for Phase 1 is 2023.

Phase 2 – The $1.37 billion Phase 2 tunnels and stations contract was awarded to a joint venture of Tutor Perini and O&G in 2017. The second section will add another 2.6 miles to the Purple Line with one station at Wilshire/Rodeo in downtown Beverly Hills and a station in the heart of Century City. Completion of Phase 2 is expected by 2025.

Phase 3 – Phase 3 comprises 2.59 miles of twin bore tunnel and stations at Westwood/UCLA and Westwood/VA Hospital. The project budget is approximately $3 billion. Project completion is anticipated by 2026. The Phase 3 tunnels contract was awarded to Frontier-Kemper/Tutor Perini Joint Venture for $410 million. Tutor Perini was awarded a $1.4 billion contract for station construction. The scope of work entails the design and construction of two new subway stations at Westwood/UCLA and Westwood/Veteran Administration (VA) Hospital.