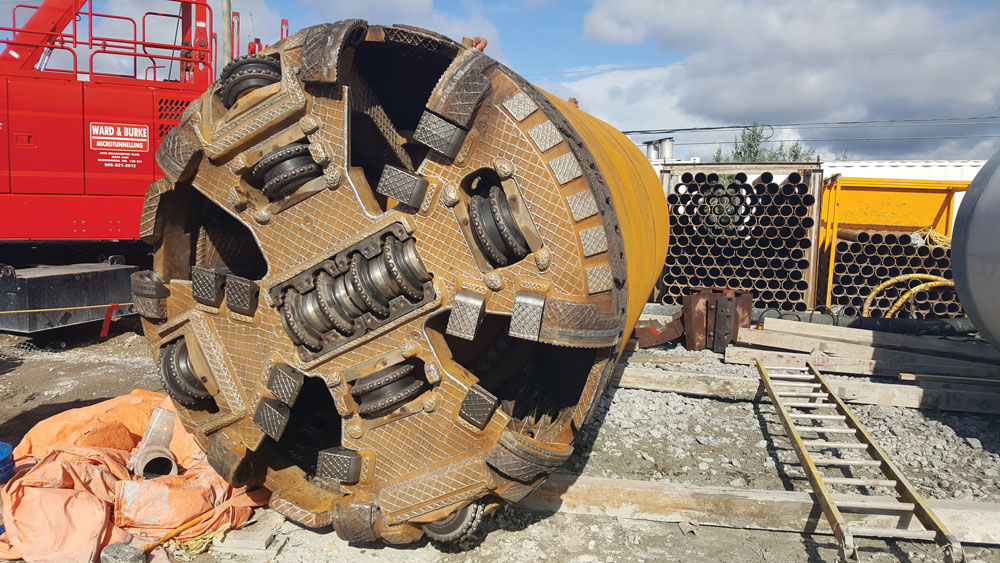 In recent years, public agencies have become increasingly strategic about their approach to managing infrastructure – largely due to the realities of aging assets and tightening budgets. Infrastructure asset management with an eye toward systematic rehabilitation and replacement is now the norm, and new and creative financing schemes are helping to ease the burden on rate-payers.

The Region of Peel in Ontario, which provides drinking water and wastewater services to approximately 1.4 million residents in Brampton, Caledon and Mississauga in the Greater Toronto Area, has taken an additional step. In an effort to optimize the performance of the wastewater collection system, maximize its useful life, and minimize life-cycle costs, the Region of Peel recently developed a new set of standards for the design, construction, and rehabilitation of its sanitary sewers.

One of the first projects to implement the new standards was the Twinning of the East Brampton Trunk Sewer. The new sewer was built with materials that would assure longevity of the built asset, and was internal pressure tested with water post construction to assure that it was leak-free. A leak-free sewer reduces treatment costs by eliminating extraneous water entering the sewer systems. 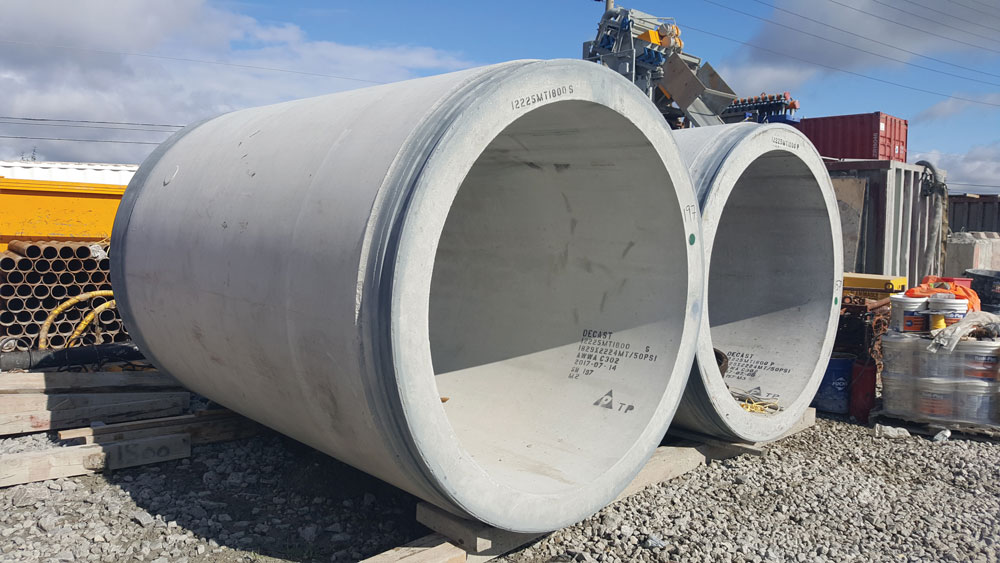 The Region of Peel Water and Wastewater Master Plan recognized the need to twin the existing trunk sewer due to capacity deficiency servicing existing and future needs of Caledon and Brampton. The Region retained Associated Engineering to provide engineering services for the preliminary and detailed design of the trunk sewer twinning.

The resulting project to build a new parallel sewer included approximately 5.2 km of 1,500-, 1,650- and 1,800 mm ID sewer from near the intersection of Queen Street and Goreway Drive to south of the intersection of Highway 407 East and Steeles Avenue East.

Ward and Burke Microtunnelling Ltd. of Mississauga, Ontario, was selected as the microtunneling contractor for the $40 million project. Construction started in May 2017 with all tunneling completed in April 2018. All internal pressure testing of the new sewers has been completed.

“The Region of Peel had trialed pressure testing on a smaller project but this was the first time it had been done on a large-scale project and large diameter pipes. We had to ensure the gravity sewer pipeline could withstand 50 psi internal pressure after the tunnel process, so we worked with the pipe manufacturer, Decast, to test the pipe at their factory before we used it in the field,” said Ward & Burke Director John Grennan. “All the lines were successfully tested signed off, and the client is happy.”

Part of the Region of Peel’s new standard called for pipe to conform to AWWA C302 standards. It had been Ward & Burke’s previous experience in working with the conventional Carnegie joint that the joint tended to separate as a result of microtunnelling activities, allowing dirt to enter into the joint gap and potentially affecting performance of the pipeline during pressure testing. To combat this, Ward & Burke worked with Decast to develop a new hybrid joint design that met the project requirements. Other than modifying the joint, the jacking pipe was built to specifications commonly used on previous Ward & Burke microtunnelling projects.

Corrosion resistance was achieved using a sulfate-resistant cement in the concrete pipe, although one section of the new sewer called for an HDPE liner cast into the pipe in an area where H2S gas concentrations were expected due to high sewer turbulence.

In the coming months, crews will commission the new line in advance of handover to the client, months ahead of schedule. To complete the project ahead of schedule, the Ward & Burke team had up to three microtunnel boring machines operating at one time. The team used a combination of two Herrenknecht AVN 1800s, one Herrenknecht AVN 1600 and one Herrenknecht AVN 1500. For long drives and curved drives, Ward & Burke used a VMT SLS LT guidance system. In the event that extra power was needed for the longer drives, Ward & Burke installed upward of 20 interjack stations (IJSs), but they were able to keep jacking forces low enough that the IJSs were not employed. 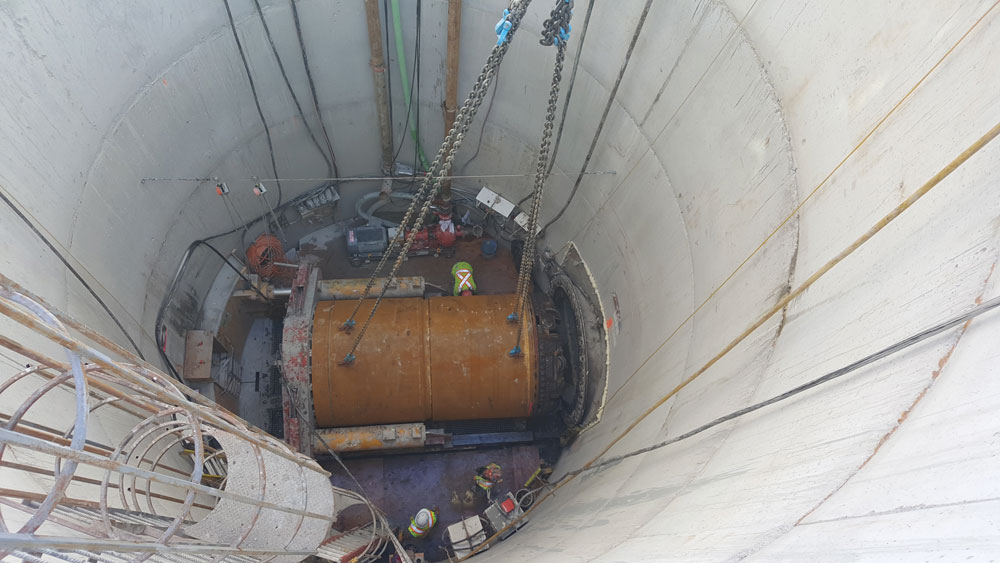 Ground conditions for the Twinning of the East Brampton Trunk Sewer consisted primarily of glacial till, which is fairly typical for the Greater Toronto Area. The till consists of a mixture of clays, sands and silts with cobbles, boulders and occasional gravels. While the ground itself can be challenging, the GTA-based contactor has a great deal of experience in this type of soil. “We are very familiar with these types of conditions,” said Grennan. “We were able to maintain low jacking forces over the entire job, so the job was very successful from a tunneling perspective.”

What did prove to be a challenge was dealing with parties along the project alignment. While verifying utility locations at the north end of the project, the project team found that a 600-mm gas main that feeds a power plant was in direct conflict with the alignment of the new sewer. To remediate the conflict, a vertical curve was introduced to raise the tunnel path above the gas main, with the gas company requiring 0.6 m of separation between the main and the new sewer.

As a result of the change, the revised alignment conflicted with a fiber-optic duct back farther upstream. Because the gravity-fed pipe could not be lower, the utility company had to expose and relocate their infrastructure to allow the tunnel to pass unimpeded.

“Dealing with third parties to keep the project moving forward was quite challenging,” Grennan said. “But we were able to get all the stakeholders together and redesign the alignment. The good news is that we were able to find the discrepancies as we were doing our due diligence rather than finding the conflict with the TBM.”

Another first on the project was a crossing of Highway 407, a major thoroughfare that is a leased toll road in the project area. Ward & Burke worked with the concessionaire, 407 ETR Concession Co. (Cintra/CPP Investment Board/SNC-Lavalin), to assure that tunnelling activities did not interfere with roadway operations.