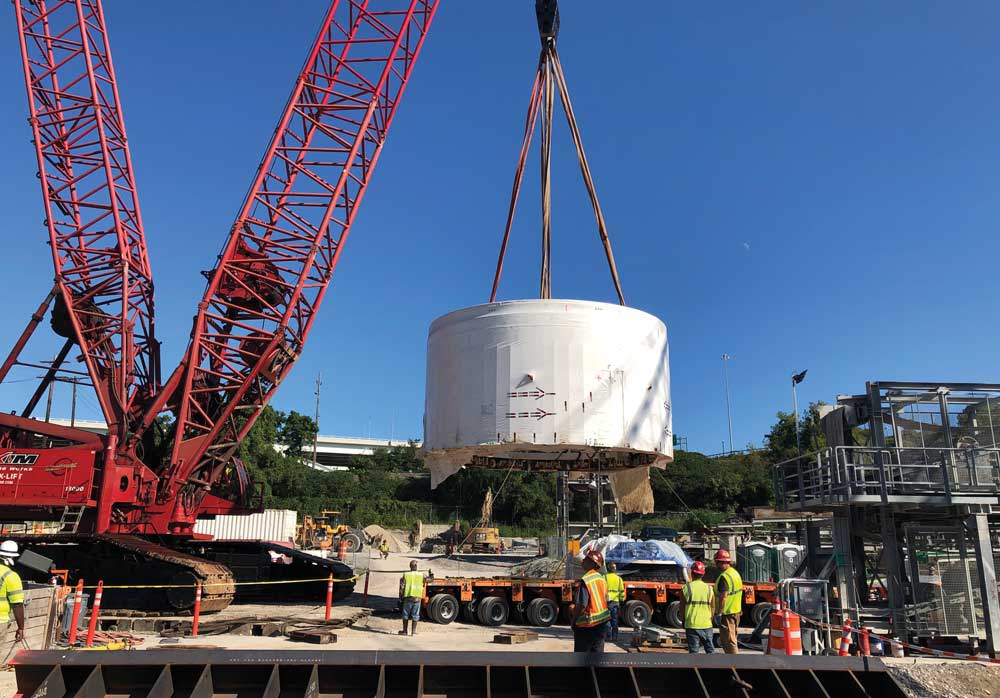 This photo shows the stationary shield being delivered to the Westerly site via Goldhofer trailer and unloaded by crane on September 5, 2020.

When considering the essential workers who have kept construction projects safe and forged the underpinnings of large-scale sewer, water, transit and energy systems, it’s important to remember the underground contractors.

Livonia, Michigan-based Jay Dee Contractors and its team of experts have played a key role in constructing and rehabilitating the underground pipelines that convey the sewer, water and energy systems we depend on, in turn, contributing more than 50 years of infrastructure upgrades that improve the environmental profile of the Great Lakes and beyond.

Established in 1965, family-owned Jay Dee has dug deep into infrastructure projects across the U.S. and Canada. Specializing in complex projects in varied geologies, Jay Dee’s work spans water, wastewater, transportation projects and more, all with an eye toward promoting sustainability and a cleaner environment.

While Jay Dee has completed all types of projects, water and wastewater tunnels were instrumental in the company’s development. “We like to think of ourselves as the stewards of clean water,” said Michael DiPonio, president of Jay Dee Contractors. “We’re proud of our track record of complex work on tunneling and infrastructure projects in the Great Lakes region and beyond. Over my lifetime I have seen a dramatic improvement in the water quality of the Great Lakes and I’m proud that our company has made significant contributions to that effort. 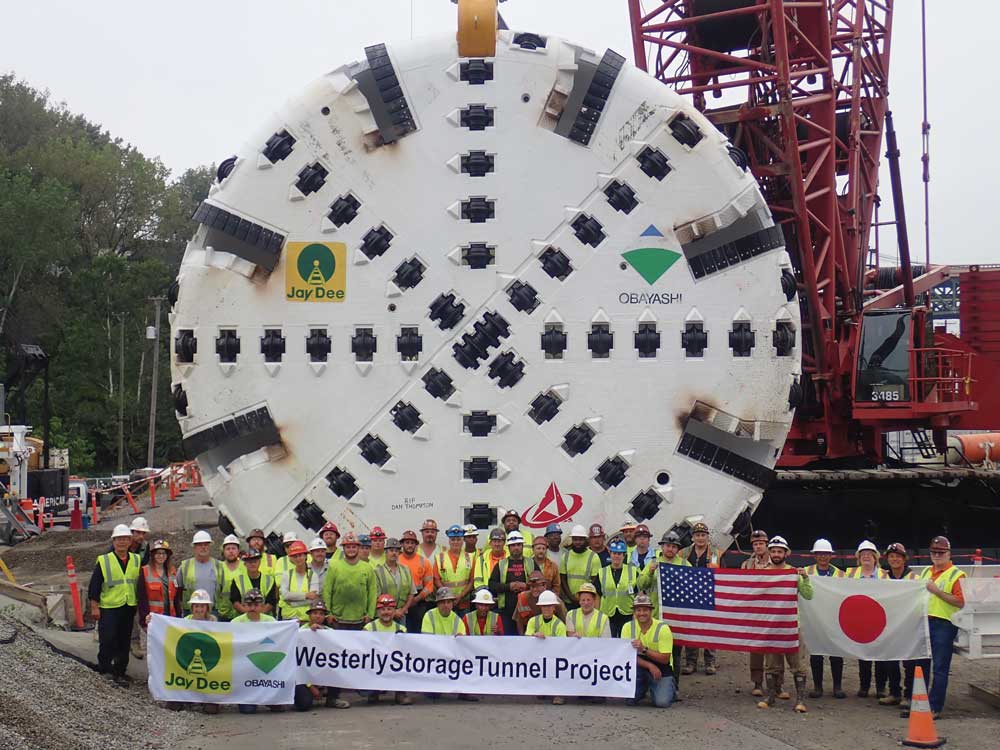 On September 30, 2019, the Jay Dee Contractors team got ready to lower the cutterhead into the shaft to attach it to the TBM. The photo features Jay Dee’s whole day shift team.

“Similar to millions of other essential workers, our team was tested for its resiliency during the COVID-19 outbreak. However, we’re proud to say that when a new or different challenge emerges, our unmatched team of problem-solvers finds a way. I’m proud to report our team is responsible for the construction of more than 50 miles of new or improved pipeline systems over the last 10 years.”

The pandemic has required many businesses, including tunnel contractors, to re-examine protocols to ensure compliance to health and safety guidelines. As an essential business, tunnel construction has continued on, but with some modifications to work practices.

“It’s been challenging for us an employer. We have a very highly skilled team of tunnelers, but when it comes to working through a pandemic, even our most experienced people are novices. Re-learning how to work during COVID has been difficult because some of the guidelines were developed quickly and are changing over time, making it somewhat of a moving target,” DiPonio said.

“For us the critical component has been social distancing, which is extremely difficult for an underground contractor. So, we’ve had to re-evaluate everything we do from limiting people in the trailers at shift changes to how many people can go in the shaft elevator and be transported to the tunnel heading.

“One thing we can do is help make workers feel safe and comfortable, so we disinfect the work areas completely between shifts. Additionally, we ask our employees to err on the side of safety and not come in if they are experiencing any signs of being sick. As a result, we have a higher absentee rate, which means we need to have a larger crew size to be able to work safely and efficiently.”

The history of Jay Dee aligns with that of the environmental movement and the passage of the Clean Water Act in 1972. The Act led to several pollution control programs beginning in the 1970s, notably the Tunnel and Reservoir Plan (TARP) in Chicago, and subsequently similar programs in the Great Lakes region and beyond. Jay Dee got involved with TARP early on with pump station construction contracts, and worked consistently on the program into the 2000s.

“We are very proud of our involvement with TARP,” DiPonio said. “Before the program started, Chicago experienced sewer overflows once every four days on average. Now, they experience four overflows per year. It has been a tremendous success and has been emulated by other cities bounded to the Great Lakes.”

Currently, Jay Dee is working on two wastewater projects in the Great Lakes region the Westerly Storage Tunnel in Cleveland, Ohio, and the Coxwell Bypass Tunnel in Toronto.

The Westerly Storage Tunnel is the most recent and largest of the Northeast Ohio Regional Sewer District’s 25-year, $3 billion Project Clean Lake, a CSO control plan that is cleaning up Lake Erie, the Cuyahoga River and other area waterways.

When completed, the project will reduce overflows into the Cuyahoga River by more than 300 million gallons per year, further benefitting a river that has experienced substantial improvement over the past several decades.

“It is rewarding working on a project like Westerly that is helping to make a difference in the environment,” said Lisa Smiley, Geotechnical Engineer/Project Engineer for Jay Dee working on the Westerly project. “Last year marked the 50th anniversary of the Cuyahoga River fire, and it is amazing to see how the water quality of the river and the lake have improved. In fact, not far from the jobsite there is a fish reservation that on the river that could not have existed without projects like Westerly and its predecessors.”

Not too far to the northeast, Jay Dee crews are engaged with another environmental project helping to reduce impacts on Lake Ontario. The Coxwell Bypass Tunnel – being built by a joint venture of Jay Dee, CM McNally and Michels Canada – is an important part of Toronto’s overall Don River & Central Waterfront (DR&CW) project. This tunnel will capture, store and transport combined sewer overflows, for treatment at the Ashbridges Bay Treatment Plant. The tunnel, being built by a 7.1-m TBM, comprises 10.5 km of new sewer approximately 50 m deep, parallel to the Don River. It represents the longest single tunnel built by Jay Dee.

While different in its end use, the Great Lakes Tunnel Project for the energy company Enbridge is another example of Jay Dee’s work having a positive influence on the environment of the Great Lakes. As part of Great Lakes Tunnel Constructors with partner Obayashi, Jay Dee is working under a preconstruction services agreement with Enbridge to provide constructability review, cost estimating and value engineering. The proposed project, currently in the permitting phase, would relocate the existing Line 5 pipeline on the lakebed in the Straits of Mackinac, which links Lake Michigan and Lake Huron.

The Great Lakes Tunnel Project involves building a new tunnel deep under the lake to house the pipeline. The project would help reduce potential impacts to the pipeline and provide complete protection to water in the Straits in the unlikely event of a pipeline failure. 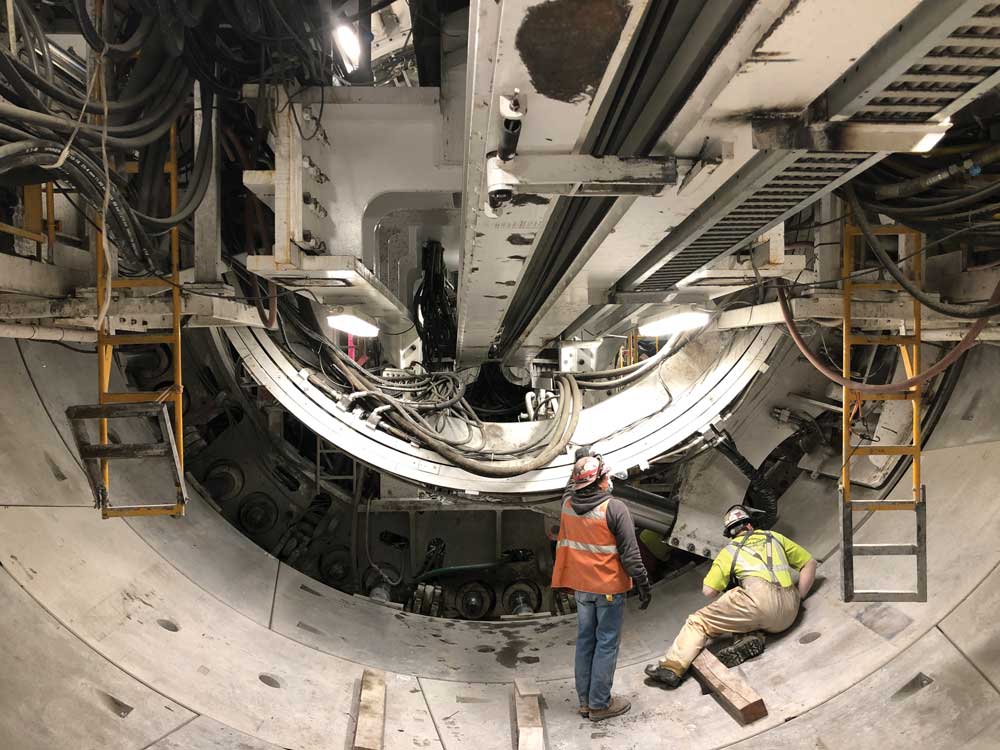 The Jay Dee Contractors swing shift tunnel superintendent and erector operator during ring installation at the Westerly project in Ohio.

While the global pandemic has adversely impacted many industries, the future of the tunneling market looks bright, especially for sewer and water projects. Even transportation projects, which may be affected in the shorter term due to reduced ridership revenues, help create a sustainable, energy efficient travel option for ever-growing cities.

“Despite the challenges we all face, the outlook looks good for tunnel companies,” said Brian Hagan, Director of Equipment and Engineering at Jay Dee. “Even at the height of the shutdowns, all of the projects we had under contract remained open. They are considered critical infrastructure, which is part of what makes our work so rewarding. People still need water and wastewater services, and they need to go from Point A to Point B.”

The critical nature of tunneling projects as well as the engineering challenges they pose can help lure and retain the next generation of tunneling professionals to the field. “Tunneling is an interesting career because of the direct influence you can make on society and the environment,” Smiley said. “It is also a great career for an engineer because every project is unique and you are always learning something new. And, when the project is built, you see the effect your work has on other people.”

Hagan concurs. “Growing up in Michigan, we always took pride in our Great Lakes,” he said. “So, it has been really special being part of a company that has worked on so many projects that have helped keep the Great Lakes clean and safe. We are proud to position ourselves as stewards of the Great Lakes and the environment.”