You are at:Home»News»UPCOMING PROJECTS: April 2022 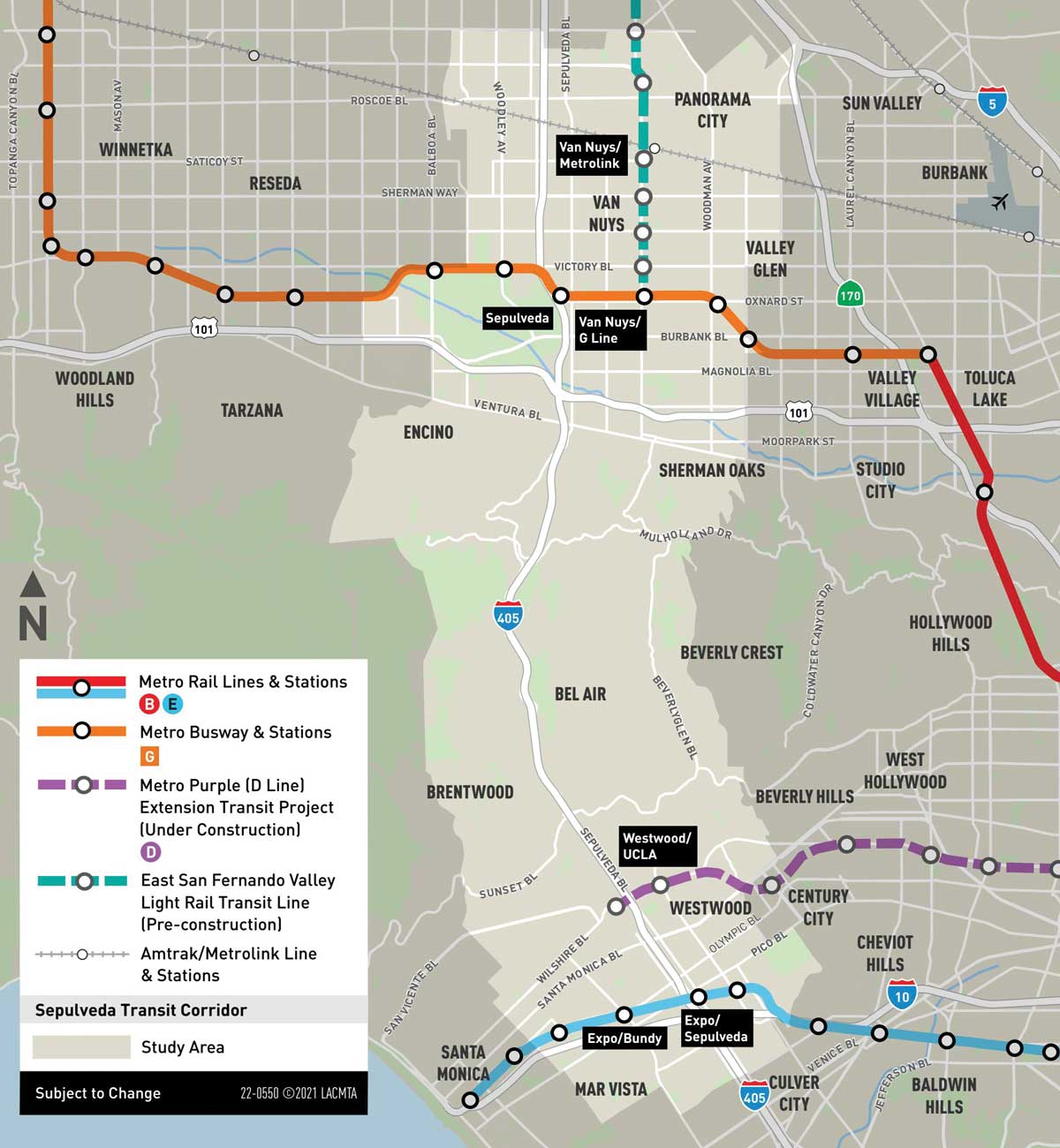 Sepulveda Transit Corridor Project
Metro is making strides to improve travel between the San Fernando Valley, the Westside and Los Angeles International Airport (LAX). The natural barrier created by the Santa Monica Mountains means that most people traveling between these areas are funneled primarily onto the I-405 Freeway, already ranked as one of the most traveled urban highways in the nation.

The Sepulveda Transit Corridor is part of the Measure M expenditure plan, with approximately $5.7 billion for new transit service to connect the San Fernando Valley and the Westside, scheduled to open by 2033-35. Approximately $3.8 billion is allocated to extend that service from the Westside to LAX with a 2057-59 opening date.

In March 2021, Sepulveda Transit Corridor Partners (Bechtel) was awarded a $69.9 million contract to further develop its proposed heavy rail transit solution concept. More than 60% of the partner team’s proposed heavy rail concept would travel underground, with the remainder of the line traveling primarily in an aerial section. A Valley-to-Westside trip would take just under 20 minutes according to the team’s proposal. The team’s estimated costs for constructing this proposed solution is $10.8 billion.

LA SkyRail Express was awarded a $63.6 million contract to further develop its proposed monorail concept that would be an aerial alignment primarily within the I-405 right-of-way between the Valley and Westside. Proposed travel times via monorail are estimated at 24 minutes. The LA SkyRail Express team’s baseline proposal cost for building the monorail concept is $6.1 billion.

In August 2021, Metro issued Notices to Proceed to the two teams to officially begin project development. Metro held an environmental review phase with project scoping from Nov. 30, 2021 and through Feb. 11, 2022, with more than 3,000 comments received.

Delta Conveyance
The Delta Conveyance Project for the Department of Water Resources (DWR) includes a tunnel through the Sacramento-San Joaquin Delta that is designed to protect water supplies from sea-level rise and saltwater intrusion into the Delta. Additionally, the project will help to reduce the risk associated with earthquakes, improve water supply reliability, and reduce impacts on local Delta communities and fish. The project, originally envisioned to include twin tunnels, is being redesigned as a single-tunnel option under Gov. Gavin Newsom, who took office in January 2019. It is anticipated that the Draft Environmental Impact Report (EIR) in mid-2022. 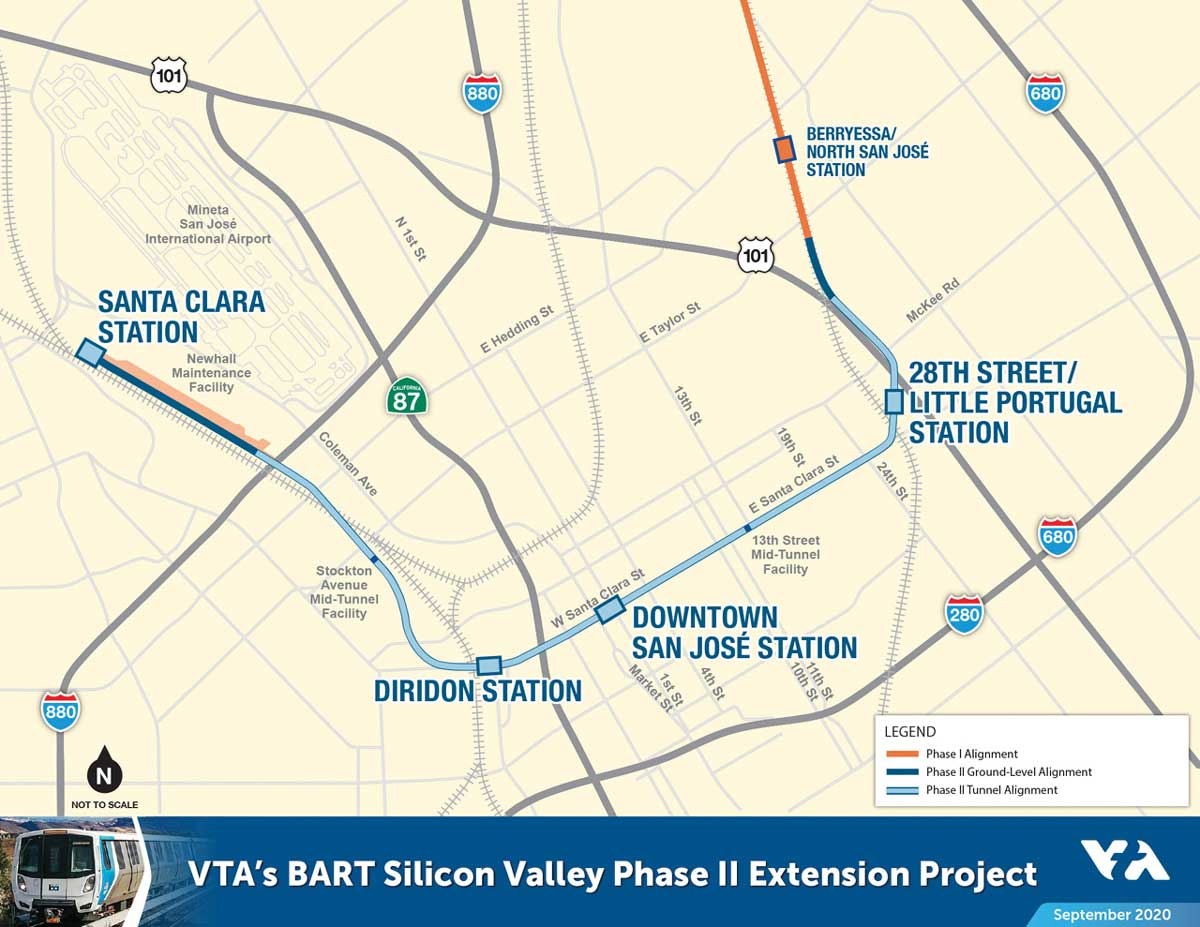 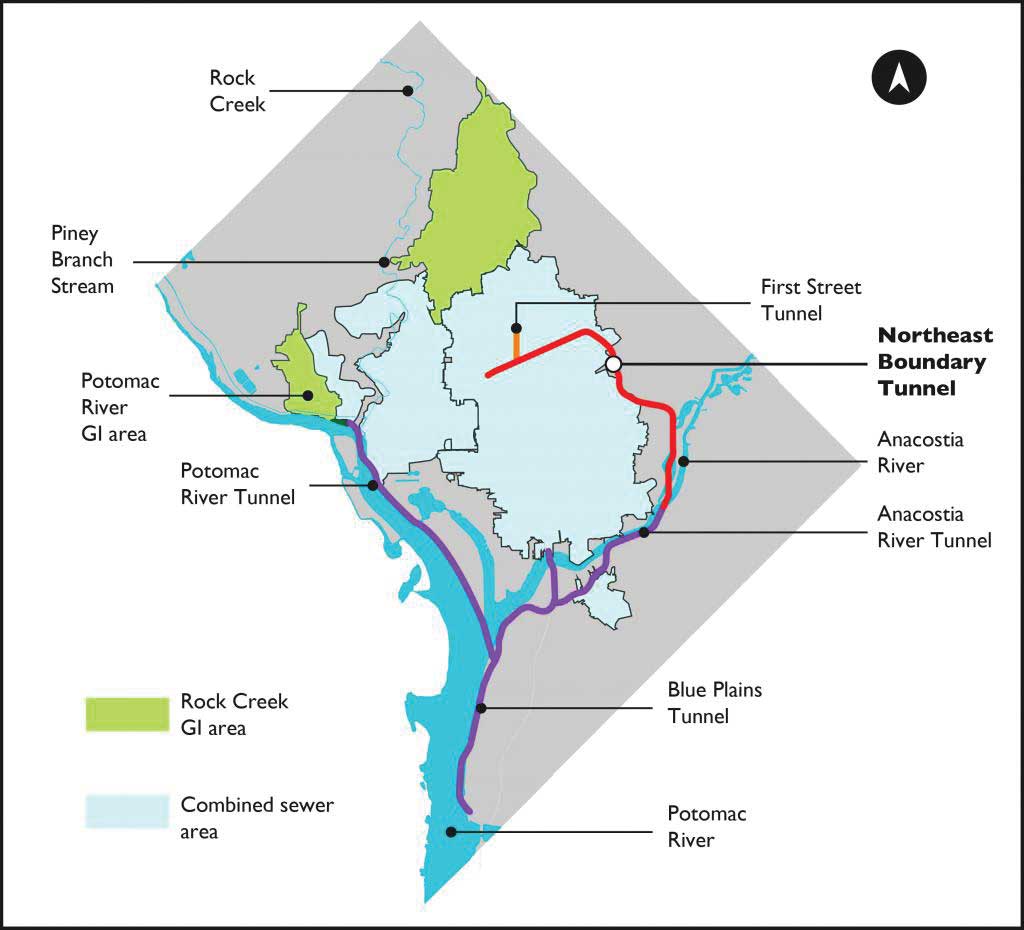 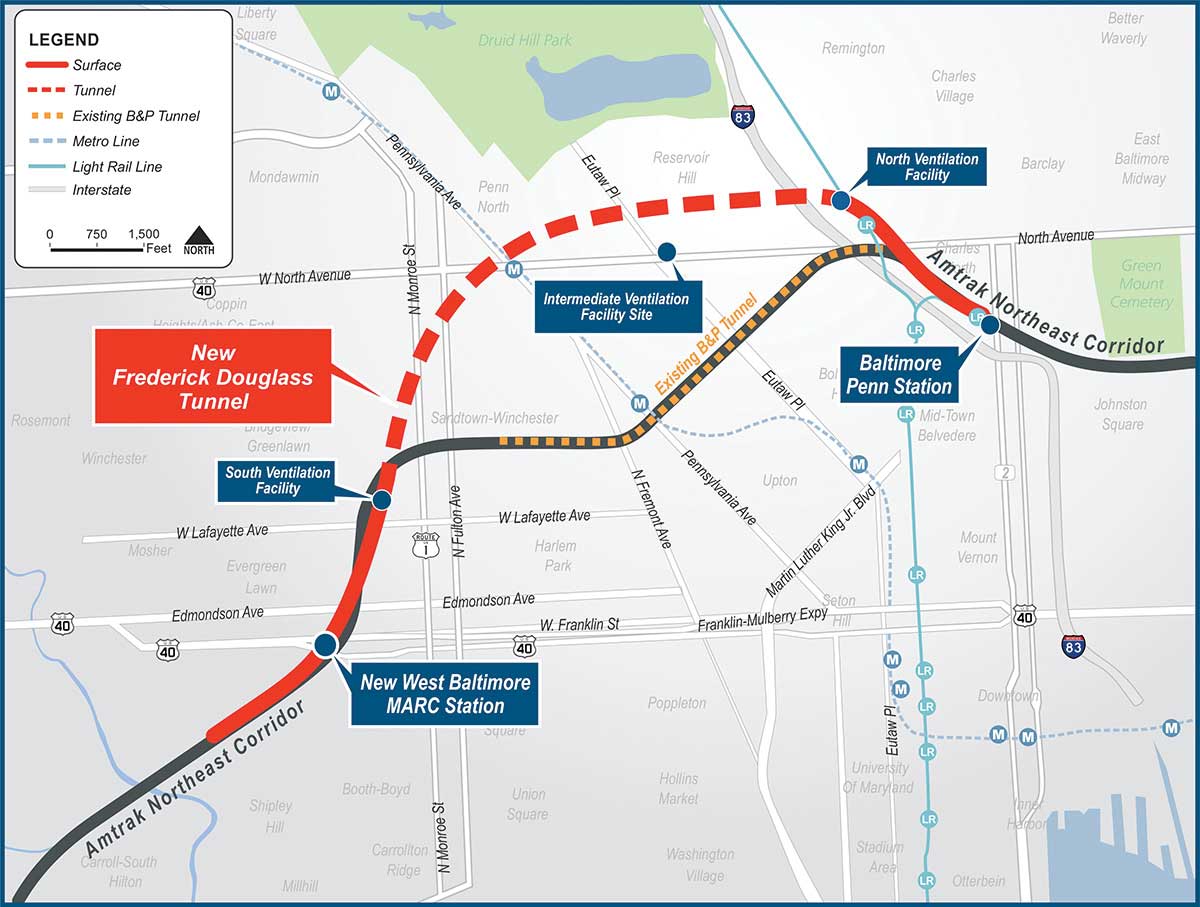 B&P Replacement Tunnel
The B&P Tunnel is a planned replacement of the existing B&P Tunnel, which is an integral portion of Amtrak’s Northeast Corridor. The new tunnel would replace the low speed, two-track brick arch tunnel, built in the 1870s with four, new single bore, high speed tunnels. The estimated construction cost is $5 billion, with a construction duration of a decade.

Amtrak is currently performing final design and initiating property acquisitions to prepare for construction. Pending sufficient funding for the approximately $4 billion investment, early construction activities on the tunnel’s southern approach could begin over the next one to two years.

Howard Street Tunnel
The Howard Street Tunnel (HST) Project consists of vertical clearance improvements along CSX’s I-95 Rail Corridor to allow double-stack trains (trains transporting shipping containers stacked on top of each other) to travel between Baltimore, Maryland and Philadelphia, Pennsylvania. The primary obstacle to double-stack service along this corridor has been the Howard Street Tunnel, a 1.7-mile-long railroad passage under the heart of Baltimore that was originally constructed in 1895. With current vertical clearances up to 18 inches less than the 21 feet necessary for double-stack, the HST and 21 other clearance obstructions currently restrict the ability to move double-stack trains along this section of CSX’s network, including to and from the Port of Baltimore.

Northeast Corridor Superconducting Maglev
The plan for the first leg of the Northeast Corridor Superconducting Maglev comprises 60 km from Washington to Baltimore, approximately 75 percent of the alignment in tunnel, and two underground stations (Washington, BWI Airport) and one at-grade station (Baltimore). The total cost is over $10 billion. TBM tunneling is anticipated as a single bore with guideways (outside tunnel diameter approximately 15m). As many as eight or nine TBMs are anticipated.

The Draft Environmental Impact Statement (DEIS) has been released but has been paused to review project elements and determine the next steps, according to the project website.
Owner: TNEM/BWRR; Prime Consultant: WSP (formerly Louis Berger); Tunneling subconsultant: Gall Zeidler.

The construction duration is estimated to last between 17-23 years, with construction beginning around 2026. The cost estimate is $1.475 billion. A CDM Smith-led team was awarded a $15.7 million, 3.5-year contract in September 2020 to develop and evaluate tunnel route alternatives, deliver environmental impact reports, conduct geotechnical investigation and evaluation and prepare a preliminary design report.

Flushing Bay CSO
The New York City Department of Environmental Protection has begun drafting an RFP for design of 2.5-mile long, 25 million gallon CSO tunnel in Queens as part of a Long-Term Control Plan. The tunnel is expected to be 18-20 ft in diameter an estimated cost of between $670 million $829 million for the preferred alternative. Preliminary plans envision construction occurring from 2026 to 2035.

Hudson Tunnel Project/Gateway
The Hudson Tunnel Project is a new two-track heavy rail tunnel along the Northeast Corridor from the Bergen Palisades in New Jersey to Manhattan that will directly serve Penn Station New York. It consists of three major elements: the Hudson Yards right-of-way preservation project, the Hudson Tunnel, and the rehabilitation and modernization of the existing North River tunnel.

A joint venture of WSP, AECOM and STV has been awarded the design contract. The tunnel portion of the contract, estimated at $13 billion, is envisioned to be a design-build contract including the Palisades Tunnel and Hudson Tunnel. The Hudson Tunnel Project is currently in the environmental review process and is on hold pending finalizing funding sources.

The Hudson Tunnel Project is part of the Northeast Corridor Gateway Program, a series of strategic rail infrastructure investments designed to improve current service and create new capacity. The Port Authority of New York and New Jersey (PANYNJ) currently serves as the project sponsor, but the project is a joint undertaking that also includes Amtrak and New Jersey Transit (NJ TRANSIT).

The existing North River Tunnel, opened in 1910, is owned by Amtrak. NJ TRANSIT and Amtrak operate approximately 450 trains each weekday through the tunnel that carry over 200,000 daily passenger trips. The North River Tunnel presents reliability challenges due to damage from Superstorm Sandy in 2012, as well as the overall age the tunnel and the intensity of its current use. Significant delays to a large number of trains occur when problems arise.

The U.S. Department of Transportation recently recommended $100 million in funding for the project under President Biden’s budget for fiscal year 2023.

Second Avenue Subway – Phase 2
Design is underway for the Phase 2 of the second Avenue Subway. A joint venture of WSP and STV is working on the design for the project that extends the line northward from 96th Street to 125th Street – a total of 1.5 miles with three new stations. The alignment will use some existing tunnels originally built in the 1970s, in addition to new soft-ground TBM tunnels. The cost estimate for this phase of the project is $6 billion, with revenue service anticipated between 2027 and 2029. In January 2022, the project advanced into Engineering phase of the federal Capital Investment Grants (CIG) program and expects to request a grant before end of 2022. 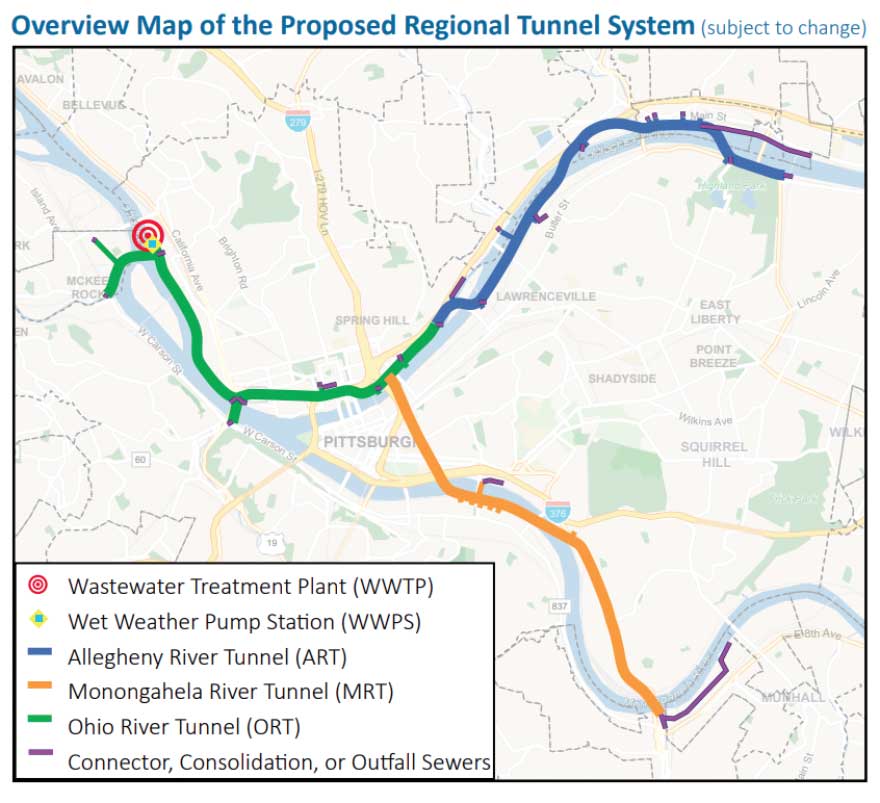 ALCOSAN CSO Tunnels
The Allegheny County Sanitary Authority (ALCOSAN) is designing a tunnel program to control combined sewer overflows (CSOs) as part of a consent decree with EPA. The $2.8 billion system improvement program is expected to include tunnel segments to store and treat overflows. The improvements are slated to be complete by 2026. The tunnels include: Ohio River Segment (1.9 miles, 12-14 ft in diameter, $84 million); Allegheny River Segment (3.6 miles, 12-14 ft in diameter, $136 million); and Monongahela River Segment (4.5 miles, 12-14 ft in diameter, $152 million). Additionally, the program will include interceptor and consolidation sewers, dewatering pump station and treatment plant improvements. Plans unveiled in September call for tunneling to begin on the Ohio River in 2023, with the others to follow.

Project Connect
On Nov. 5, 2020, voters in Austin, Texas, approved the $7.1 billion Project Connect transportation proposal. This proposal, which includes a 1.6-mile tunnel in the city’s downtown area, includes using property tax revenue to fund the project, with 45% coming from federal sources.
Project Connect is to include:

The Downtown Transit Tunnel will separate proposed light rail service from street traffic, enabling faster, safer and more reliable travel through downtown. The new rail system will connect at underground stations at Republic Square and other downtown locations. These stations are planned to include such amenities as retail, restaurants, a transit store and service center.

The tunnel’s stations will provide connections to the new rail system and expanded bus service. In addition to a transitway, the stations will provide a new public space for transit customers and the larger community. The stations will be climate-controlled and are planned to include features such as public art installations, a performance venue for live music, shops, coffee shops, restaurants, free Wi-Fi access, comfortable seating, public restrooms and security cameras. Agents at the CapMetro Transit Store will serve customers with transit information and sell tickets for all services.

The initial investment includes 27 miles of rail service and 31 stations, including the downtown tunnel and stations. According to recent report in CommunityImpact.com, the construction estimate for the tunnel portion of Project Connect at the 30 percent design phase was approximately $4 billion.

D2 Subway
Dallas Area Rapid Transit (DART) is well underway with planning and preliminary design of the D2 Subway, which will provide a second light rail alignment through downtown Dallas.

The project team led by DART, the City of Dallas, the North Central Texas Council of Governments (NCTCOG), and the Texas Department of Transportation, recently completed its East End Evaluation to review potential changes to the eastern alignment. The review led to a new recommended alignment that was approved by Dallas City Council and the DART board.

Flood Control Tunnels
The Harris County Flood Control District is entering the second phase of a study to explore the feasibility of building deep tunnels to divert storm water to prevent flooding. The district signed a $2.5 million contract with Black & Veatch to study the size and effectiveness of tunnels at various locations in the county, as well as funding sources. The district got a $2.5 billion flood bond approved last summer.

According to the communityimpact.com, early estimates indicate that it would cost about $1.5 billion to build 10 miles of 40- to 50-ft tunnel. The next phase would include preliminary engineering, which would take approximately 12-18 months. 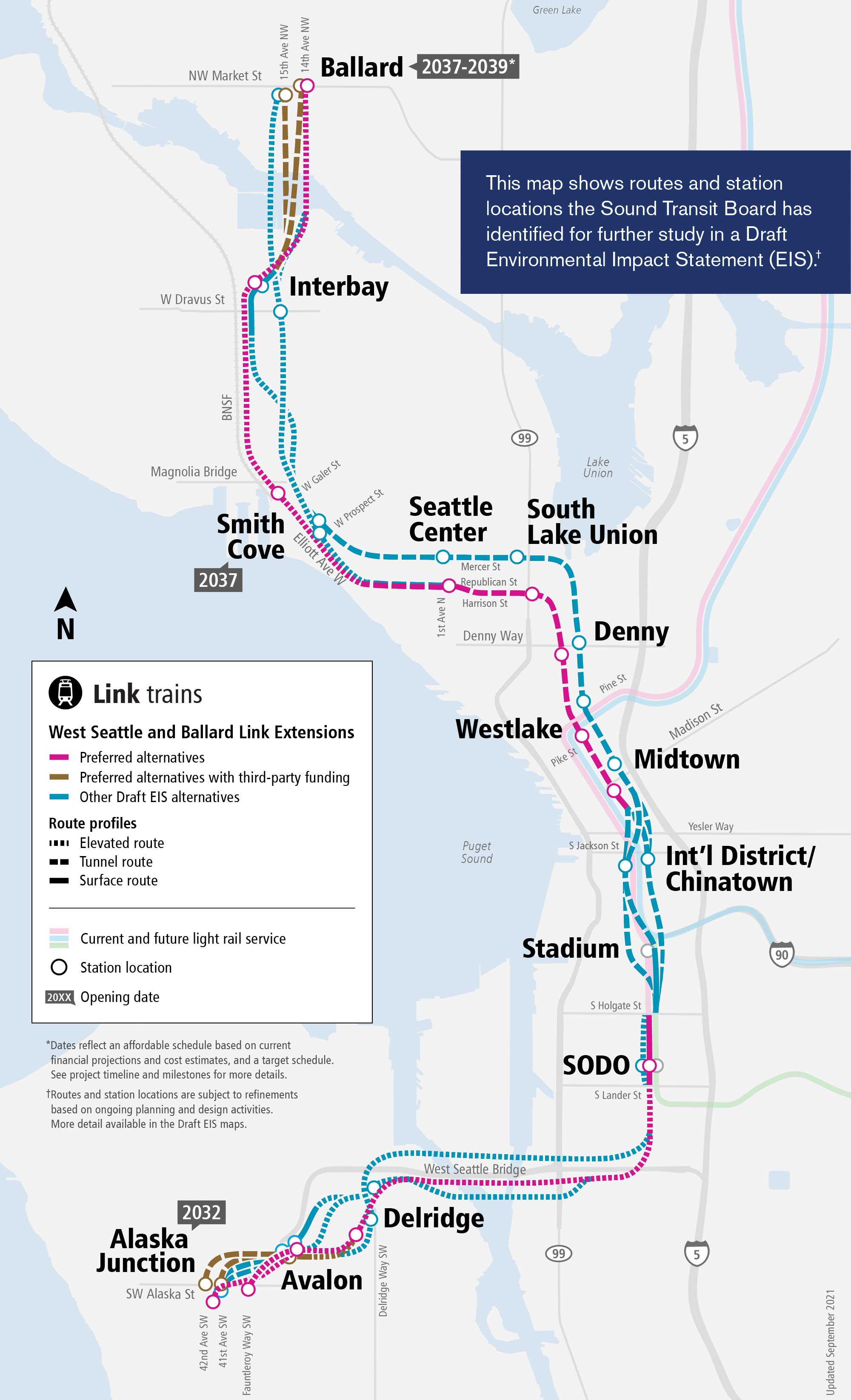 West Seattle and Ballard Link Extensions
Sound Transit is planning for new extensions to its Link Light Rail system including:

The Sound Transit Board has identified preferred alternatives and other alternatives to study in a Draft Environmental Impact Statement. The Draft EIS is currently under public review through April 28.