You are at:Home»Featured Stories»Ventilation and Safety Systems Design for SR99 Single Bore Tunnel

For the SR 99 single bore tunnel these systems are designed to address emergency and normal operation modes capable of mitigating fire hazards and maintaining safe pollutant concentration levels within tunnel facilities while introducing optimization for environmentally sustainable energy cost savings. The single bore envelope cross section configured for stacked roadways also provides space on one side for an extraction duct as well space on the other side for a pressurized corridor. The extraction duct and exhaust dampers allows greater safety in congested downstream traffic conditions, where smoke can be removed at the fire incident location, rather than push the smoke forward to the exit portal. The pressurized corridor allows protected refuge and egress to the closest point of safety. The fixed fire suppression system is provided to limit the fire size while the lower portion of the tunnel cross section is used as a drainage utilidor sized for fire flows.

A key to successful design and operation of this single bore tunnel involved stakeholder consensus of all involved parties. Fire detection and continuous monitoring, hazard verification, traffic control, and response capability are an operational necessity. Safe conditions for motorists and first responders start with limiting the size of fire events and associated fire hazard effects through early ventilation and suppression, as well as timely communications for egress and response.

Design capacities and equipment configuration of north and south operations building central exhaust fan plants along with portal jet fan longitudinal ventilation tunnel segments were established to limit the spread of smoke and heat. However, when considering normal operation scenarios of the SR 99 tunnel ventilation system the ventilation equipment is operated at incremented levels to maintain acceptable air quality to meet the ventilation need while concurrently minimizing energy consumption.

Proper operation of the system during normal operation must consider acceptable air quality criteria for the atmosphere within the tunnel, as well as the nearby neighborhood air quality in proximity to the tunnel portals. Ventilation air demand is based on vehicle emissions calculated from vehicle traffic mix distribution and the number of vehicles inside the tunnel as per PIARC guidelines and admissible SR 99 project air quality standards. Analysis utilizing predicted traffic volume for 2015 and SES simulations showed that mechanical ventilation would not be required for free flow traffic conditions and exit portal emission concentrations would be below a minimum threshold level. However, zero exit portal emission criteria would require almost continuous mechanical ventilation.

Historically, vehicular tunnel ventilation systems have been designed for limiting pollutant concentrations, however technological advancement in automotive industry and increase in society demand for limiting loss from fire or other incidents within transportation infrastructure has fundamentally changed ventilation system design. For modern day facilities, such as SR 99, ventilation system capacities are established by emergency incident operations with design elements included to limit the annual operating costs during normal operations when pollutant concentrations are to be maintained below acceptable standards both inside the tunnel and immediately adjacent to tunnel exit portals. 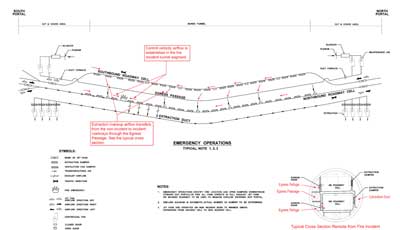 Figure 1 shows an overall longitudinal schematic of the system with a cross section of the bored tunnel.

Maintenance air is supplied from fan rooms in the South Operations Building and North Operations Building. Air flows through the north and south cut-and-cover sections into the bored tunnel Invert Utilidor level and into the maintenance air plenum and ducts above the south Utilidor level. Ducts and dampers from these areas supply ventilation to the North Utilidor and South Utilidor areas located west of the roadways, and pressurize the egress rooms, stairways and egress passage.

The bored tunnel northbound and southbound roadways each have 15 egress doors spaced 650 ft apart along the west side. These are automatically closing doors that open into egress room areas at the roadway level. As shown in Figure 2, the northbound level egress rooms each have a stairway up to the egress passage and the southbound level egress rooms each have a stairway down to the egress passage. The egress passage runs the length of the tunnel and connects to passages and exits to street level through the north and south cut-and-cover tunnel sections. Note, areas of refuge are provided at each roadway level egress door for those unable to negotiate the stairs to the ground level.

The two tunnel operations buildings (North and South) each house an extraction ventilation fan room, a maintenance air system fan room, and support equipment. Each building contains the security controls, power, and communications systems required to operate the entire system and allow remote operation from remote traffic management center. Extraction fan rooms in each of the North and South Operations buildings house four extraction ventilation fans and are located along the east side of north and south cut-and-cover sections that transition to bore section. These fans sit above an extraction air plenum connecting to the cut-and-cover extraction duct feeding the bore tunnel extraction duct. Each fan discharges to a ventilation stack through the building ceiling.

Two maintenance air fans are located at the two operations centers with equipment sized for n+1 redundancy to supply fresh ventilation air to the maintenance air ducts extending the length of the tunnel.

Environmental impact work estimated air quality at sensitive land uses near the tunnel portals and the ventilation stacks of the tunnel operations buildings. AERMOD dispersion model was used to estimate CO and PM2.5 concentrations at sensitive receptors along public sidewalks and at doors and operable windows opening toward the roadway. Tunnel ventilation operations calculations were completed to demonstrate that ambient air quality at sensitive receptors are not adversely impacted due to emissions, at the tunnel portals and ventilation stacks.

Based on environmental impact modeling, the use of extraction fans for emissions control is necessary to maintain ambient pollutant levels outside the portals at levels not significantly different from the air quality analysis.

SES modeling has shown that the most effective way to mitigate the piston effect of airflow out of the portals is to extract air through the dampers near the exiting portal. The extraction and jet fans have sufficient capacity to mitigate piston effect airflow at the tunnel portals when vehicular speeds are greater than 5 mph. At vehicular speeds of 5 mph and below, extraction through dampers near the center of the tunnel is more efficient. At these speeds, airflow against traffic toward the extraction location will be counteracted by piston effect airflow, resulting in a stagnant air location and a spike in CO concentration in one model zone. 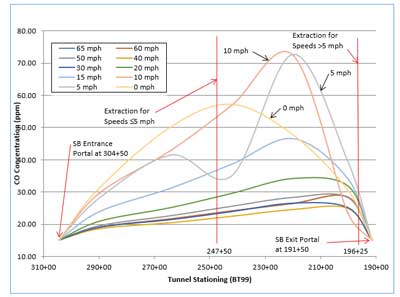 At complete standstill traffic conditions, the ventilation system must actively ventilate the tunnel. In this case, tunnel occupants could be exposed to CO concentrations as low as 35 ppm, for more than 45 minutes.

In the event of a fire in the roadway, several systems will work together to alert motorists and to provide tenable conditions in the tunnel. Linear heat detectors placed above the roadway will generate a fire detection signal when the air temperature rises faster than 15.5 degrees C (28 degrees F) per minute or reaches 88 degrees C (190 degrees F). The extraction fans and jet fans will start to spool up when fire is detected. Coordinated design elements account for jet fan and tunnel extraction fan operations sequenced fan start up and acceleration to design speed, stabilized flow development within the extraction duct, and extraction damper actuation.

Sprinklers will be activated in two fire suppression zones within 80 seconds of fire detection. This rapid response time involves immediate and continuous monitoring of all conditions in the detected incident location, verification of fire hazard conditions, traffic control for approaching vehicles, and consideration of the secondary impacts of the use of the deluge system. This automated 80-second response time includes a 60-second positive alarm sequence (operator notification, count down timer and over-ride functions) and 20 seconds for the fire suppression pipe network charging and stabilized spray head flow. PAS coordination with tunnel active traffic management system is a key safety element of the system providing adequate traffic control to limit risk of unsafe driving conditions created by wet pavement and limited visibility during sprinkler operation. 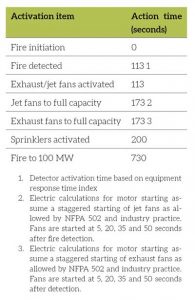 Tenable conditions are maintained beyond 100 ft upstream (against traffic flow) and 600 ft downstream (with traffic flow) of a fire with a design fire heat release rate of 100 megawatt (MW) with an ultrafast growth rate because of the activation of a sprinkler fire suppression system.

Table 2 and Figure 4 describe the critical, worst-case scenarios for the design of the tunnel ventilation system. These scenarios are the six locations on the northbound roadway selected for CFD analysis of the system.

The CFD model results for locations NB-1 through NB-6 show all locations meet the requirement to maintain tenable conditions beyond 100 ft upstream of the fire. Tenable conditions are maintained indefinitely upstream of the fire where back-layering smoke is controlled by the TVS. Any smoke is 2.5 m or more above the roadway surface in tenable areas. 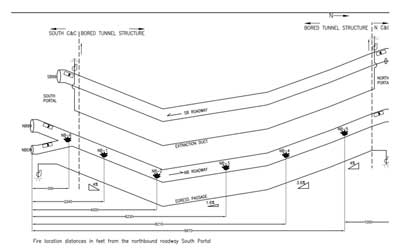 The self-evacuation egress modeling provided in safety calculations allows four minutes of pre-movement time before tunnel occupants start to evacuate. Pre-movement time is the time between the start of the fire and when occupants begin moving towards the exits. The four-minute time includes two minutes for fire detection and notification, and two minutes for occupants to make a decision to move toward the exits. 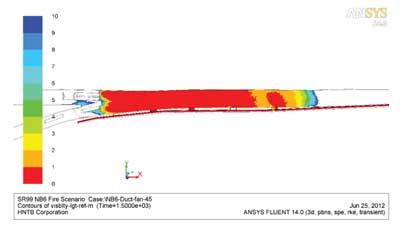 Unique ventilation conditions at the south portal are created by both the tunnel interface to atmosphere and changes in roadway geometry. Figure 5 demonstrates where the ventilation system is capable of limiting spread of fire hazards when the fire is located within the south portal tunnel segments of the northbound traffic cell. During this ventilation mode, jet fans located at the north portal of the northbound traffic cell are required to establish a pressure jump at the portal to prevent fire hazards from flowing south over backed up traffic. Figure 6 shows where tunnel side mounted jet fans were evaluated for peak velocities at occupied areas along the shoulders areas of the roadway. 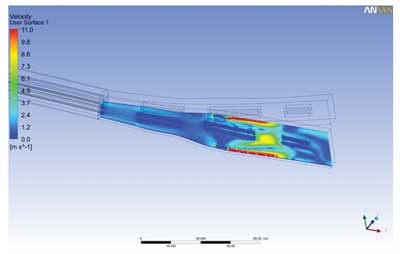 Single bore stacked roadway tunnel configuration has potential for project cost savings and other benefits including low community impact from construction operations. Close design coordination of static and dynamic safety systems for both emergency and normal operating conditions provides a robust system capable of rapid response while providing some operating energy efficiency. A pressurized egress corridor is one static safety system designed into the facility that provides critical self-evacuation and response access operations. Ventilation for mitigation of smoke and heat fire hazards will typically establish the design configuration and capacity for a tunnel facility. However, it was found that some key features could be designed into the system to minimize ongoing energy consumption operation costs. SR 99 single bore stacked roadway will provide safe and efficient tunnel operations for metropolitan traffic conditions in Seattle.
Static systems, which do not require detection and activation, include pressurized egress corridor and design geometry to limit unsafe conditions developed by either fire or pollutant concentrations during normal operations. Dynamic systems, activated by pollutant concentration or fire detection equipment, include sprinkler fire control and ventilation systems.