You are at:Home»News»International News»Webuild Celebrates Double Breakthrough for Genoa-Milan Railway 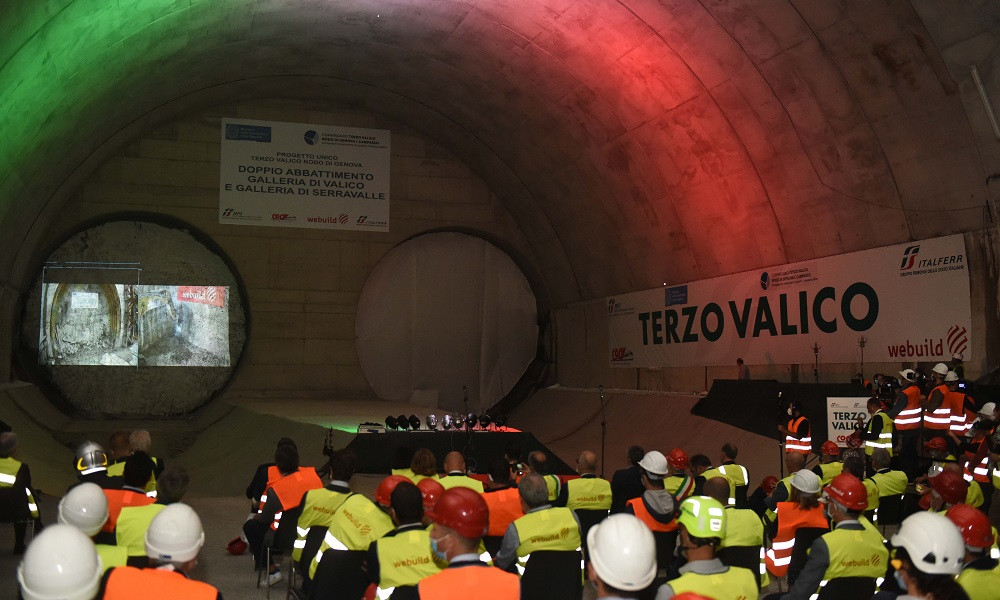 Webuild Group celebrated a double breakthrough for the Terzo Valico dei Giovi high-speed/high-capacity railway it is building between Genoa and Milan to improve the port’s links with the rail network in northern Italy and the rest of Europe.

“We are proudly here today for a double breakthrough, and the opening of these two tunnels serve as an example of the extraordinary expertise of so many people, whom I thank for all the hard work that they have done,” said Salini. “There are many families who are worried about their future, and the government has to confront this emergency by giving a concrete response to jump start employment and relaunch public works. This is the only way for us to give our country strategic projects like what Terzo Valico is for northern Italy.”

The double breakthrough will allow for all the work sites to be connected to one another along a section of 17 km. The first breakthrough done by the traditional excavation method occurred along the Valico Tunnel. It was the first of a number of breakthroughs that will occur along the planned tunnel’s entire length of 27 km. It hosts the Camerone di Valico Nord, an underground cathedral of sorts covering 540 square meters, and measuring 30 m wide and 22 m high.

The second breakthrough was along the Serravalle Tunnel, with 6.4 km of its 7 km in total length already excavated by tunnel-boring machine. At work was a TBM baptized “Giovanna”, 115 m long with a diameter of nearly 10 m. Its underground journey saw it cross complicated terrain near the Serravalle Designer Outlet and the old Genoa-Turin railway that required the use of an innovative monitoring system above and below ground.

With a total length of 53 km, 36 km of which are underground, the Terzo Valico dei Giovi will reduce the time it takes to travel train between Genoa and Milan to 50 minutes from one hour and 39 minutes. The railway will become part of the Rhine-Alpine corridor of the Trans-European Transport Network (TEN-T). In addition to the construction of the main line, the project includes four connections among Voltri, Genova Parco Campasso, Novi Ligure and Tortona in order to link the new railway to the existing ones. Within the near €6.9 billion project, Webuild is also working on the Nodo Ferroviario (Railway Hub) in Genoa, another strategic project alongside Terzo Valico dei Giovi.

Webuild is working on a number of other railway projects for the TEN-T. They include the Verona-Bivio di Vicenza section of the Verona-Padua high-speed/high-capacity line; the Naples-Cancello and Apice-Hirpinia sections of the Naples-Bari high-speed railway; as well as the Bicocca-Catenanova section of the regular Palermo-Catania railway in Sicily.