You are at:Home»News»International News»Webuild Completes Filling of Tunnel in Project To Clean Matanza-Riachuelo River Basin In Argentina 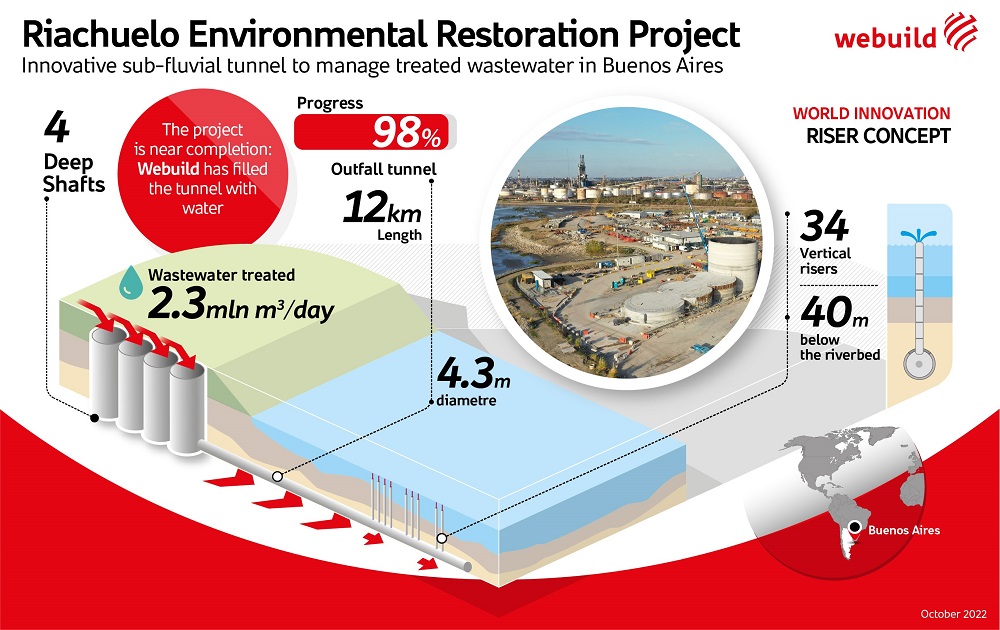 Webuild, a global leader in the water sector, has completed filling with water from the River Plate an innovative sub-fluvial tunnel near Buenos Aires, part of Lot 3 of the Riachuelo Environmental Restoration Project, a sustainable development initiative financed by the World Bank to clean up Argentina’s Matanza-Riachuelo River Basin, one of the most polluted in the world.

At a length of 10.5 km and a depth of 40 m below the bed of the River Plate, the 4.3-m diameter tunnel will receive wastewater from the basin that has been treated at a new plant and diffuse it into the river at an average rate of 27 cubic meters per second. The innovative part of the tunnel is the series of 34 risers each at a diameter of a little less than 1 m installed along the ceiling of the tunnel. The treated wastewater passes through the risers that reach up to the bed of the river.

Known as Lot 2 of the project, the plant and accompanying pumping stations are being built by Webuild’s subsidiary, Fisia Italimpianti, and partner Acciona with a 35% stake. The plant will be one of the biggest of its kind in the world. Once the entire project is completed, an estimated up to 2.3 million cubic meters of wastewater from the basin will be treated every day, improving the lives of more than four million people who live in the heavily industrialized area.

Webuild, which was ranked first among global contractors in the water sector in the latest survey by U.S. trade magazine Engineering News-Record (ENR), is overseeing the construction of a number of projects across the globe that confirm its commitment to sustainable development. In the United States, it is completing the Northeast Boundary Tunnel (NEBT) to help Washington, D.C., reduce the amount of untreated water that spills into its water bodies during heavy storms. In Oman, it is building the Ghubrah 3 IWP and Barka 5 IWP desalination plants to meet demand for potable water among the local populace of this arid country. In Tajikistan, it is building a hydropower dam – the tallest in the world – to support the development of the country.