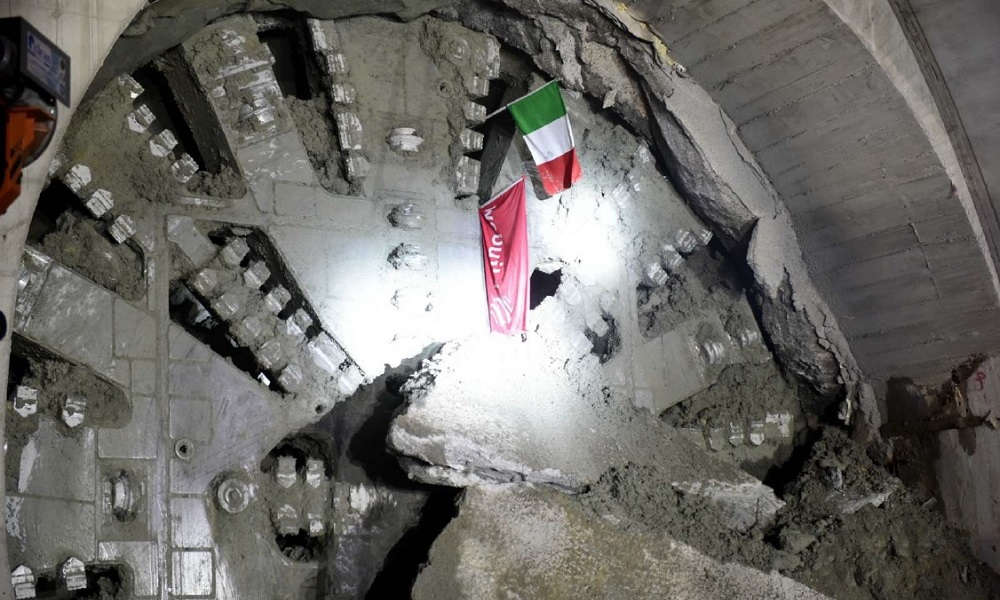 Workers celebrated the breakthrough of a tunnel boring machine (TBM) that marked the completion despite the difficulties posed by COVID-19 of the Serravalle tunnel, the second longest tunnel for the Terzo Valico dei Giovi high-speed/high-capacity railway project being developed in Italy by Consorzio Collegamenti Integrati Veloci (COCIV), the consortium led by Webuild. The milestone, which brings to 65% the amount of excavation completed, establishes an uninterrupted connection among the work sites along a 22-km section of the railway on the side of Piemonte region of the project.

The breakthrough inside a chamber of the Serravalle tunnel at the Libarna site near the municipality of Arquata in the province of Alessandria was witnessed by Italian Infrastructure and Sustainable Mobility Minister Enrico Giovannini, who was connected remotely; Extraordinary Commissioner for the Terzo Valico dei Giovi and Genoa Junction projects, Calogero Mauceri; Webuild Chief Executive Pietro Salini; Ferrovie dello Stato Chief Executive and General Director Gianfranco Battisti; and Liguria and Piemonte governors Giovanni Toti and Alberto Cirio.

“I see there is a big political debate over the Recovery Plan, which foresees investments in infrastructure over a period of six years for nearly €50 billion, representing 0.5% of GDP,” said Salini. “These resources need to be put together with other sources of financing. Before COVID-19, the country spent about 2% of GDP in infrastructure. So, to revive the economy, we need a big boost and more spending. We’re talking about at least €300 billion, which is in line with investments being made by other European countries in infrastructure. I hope to be able to see projects for new infrastructure start soon with a long-term vision for our country. We are a sustainable company. We have important goals in terms of the environment, diversity and safety. But the first thing to be considered sustainable is work. There are no sustainable countries where there are no jobs. It is the creation of employment that should be at the top of everyone’s minds, as is foreseen in Article One of our Constitution.”

“I thank Minister Giovannini for honoring us with his presence on a day of rejoicing like this one,” continued Salini. “We are living in difficult times. So, to celebrate results that have been achieved is important. We need to show how we can build important public works for the country despite this complicated situation. We are doing many of these with Gruppo Ferrovie dello Stato and ANAS, the biggest economic engine for the construction sector. It is a sector that is represented by many women and men, part of the 5,000 people who, with sacrifice, are bringing this project forward. The Terzo Valico construction site is special because it showcases the excellences as well as the problems of the country, such as the length of the approval process for every large infrastructure project. The secret to reviving the sector is to be able to do the projects with simple approval processes in line with European rules. But we need to believe in it and put ourselves at the service of the country, just like what we are doing on 18 projects in the country – together with a supply chain of 7,000 businesses with which we share a vision to grow.”

The Serravalle tunnel, about 7 km in length, was excavated for 6.4 km by the TBM Giovanna, which ended its work on September 2020, while TBM Elisa came to a halt on April 16. Both have a diameter of 10 m. The excavations faced complex situations like the path under the Serravalle Outlet and the historic Genoa-Turin railway that required the application of innovative monitoring systems above and below ground.

The Genoa-Milan connection will reduce travel times between the two cities and represent only part of the sustainable mobility to be guaranteed by Terzo Valico dei Giovi. At a total length of 53 km, the railway will join the Rhine-Alpine corridor of the Trans-European Transport Network (TEN-T), connecting Genoa on the Mediterranean Sea with Rotterdam on the North Sea. The railway will have four connections at Voltri, Genova Parco Campasso, Novi Ligure and Tortona in order to link it to the existing lines. Webuild is also working on the Railway Juncture in Genoa, another strategic project that will bring high-speed rail service to the port.