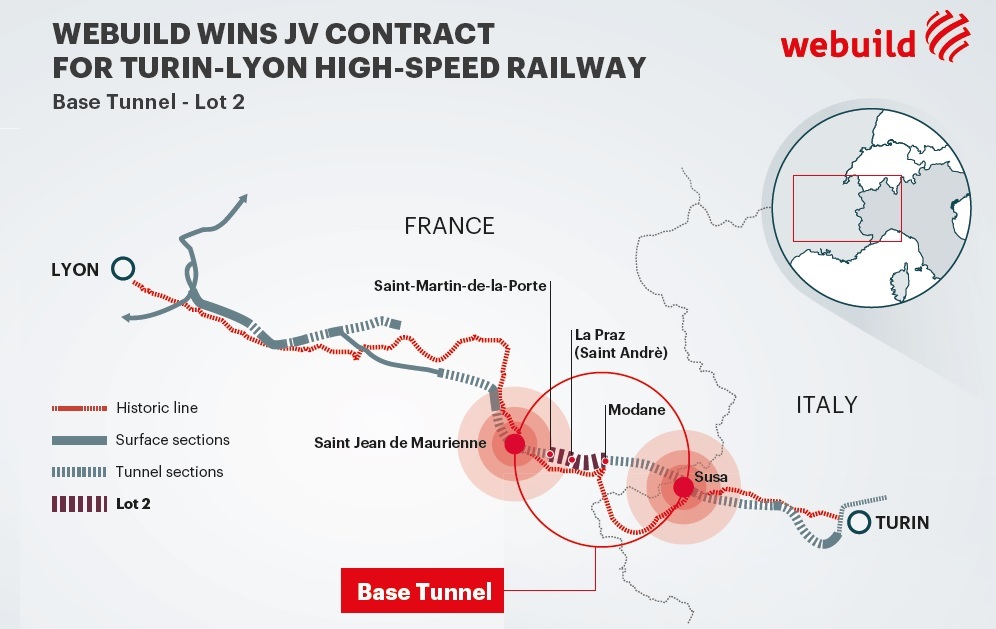 Webuild and its joint-venture partners have won a contract worth €1.43 billion for the excavation of a section of the base tunnel for the high-speed/high-capacity railway planned under the Alps between Turin and Lyon, a major project of the Trans-European Transport Network (TEN-T), the ambitious European Union sustainable mobility initiative to connect the continent’s railway networks and increase the transport of people and goods on rail rather than road.

With this new contract, Webuild has approximately €9 billion worth of new orders that it has acquired, is in the process of finalizing and for which it has become the preferred bidder so far this year. The orders highlight the Group’s focus on Italy, Australia, France and Switzerland. Their combined value excludes the recent signing of a final contract worth $16 billion (€13.1 billion) for the construction of a high-speed railway in Texas.

Webuild with a 50% stake in the joint-venture that won the latest contract, with French group Vinci holding the remaining 50%.

Commissioned by Tunnel Euralpin Lyon Turin (TELT), the contract involves Lot 2, namely Work Sites 6 (La Praz) and 7 (Saint-Martin-de-la-Porte). It entails excavating a combined total of 46 kilometers, including the two parallel tunnels for the railway as well as auxiliary tunnels and caverns between the towns of Saint-Martin-de-la-Porte and La Praz on the French side of the border. Most of the excavation, to be done using the traditional method and tunnel-boring machines (TBMs), will be focused on the two parallel tunnels.

Lot 2 is the second contract to be won by Webuild on the project. In 2020, the Group and is joint-venture partners won a contract for Lot 5A that involves preparatory works for a safety site at Modane and four ventilation shafts for the future base tunnel ahead of the creation of a logistics hub 500 metres under the Ambin Massif.

The entire TELT project will stretch for 65 kilometers between Susa in Piedmont, Italy and Saint-Jean-de-Maurienne in Savoy, France. Of its total length, 57.5 kilometers will be underground, approximately 10 kilometers of which have already been excavated.

The TELT is a major section of TEN-T’s Mediterranean Corridor that will connect southwestern Europe with Central and Eastern European countries. By 2030, the Turin-Lyon railway will take enough trucks off the roads to contribute to the reduction of the equivalent of three million tonnes of CO2 each year.

A major builder of railways with a track record of 13,637 kilometers worldwide, Webuild is involved in a number of projects that are contributing to the development of sustainable mobility in Italy, which is investing heavily in the sector under the government’s “Piano Nazionale di Ripresa e Resilianza” (National Recovery and Resilience Plan). The Group is working on the Brenner Base Tunnel under the Alps between Italy and Austria. At 64 kilometers, it will be the longest railway tunnel in the world when it is completed and be part of TEN-T’s Scandinavia–Mediterranean Corridor. Webuild is also working on the high-speed railway between Naples and Bari, and the high-capacity railway in Sicily between Palermo, Catania and Messina.