You are at:Home»News»Work Set to Proceed on Mountain Tunnel Improvements Project 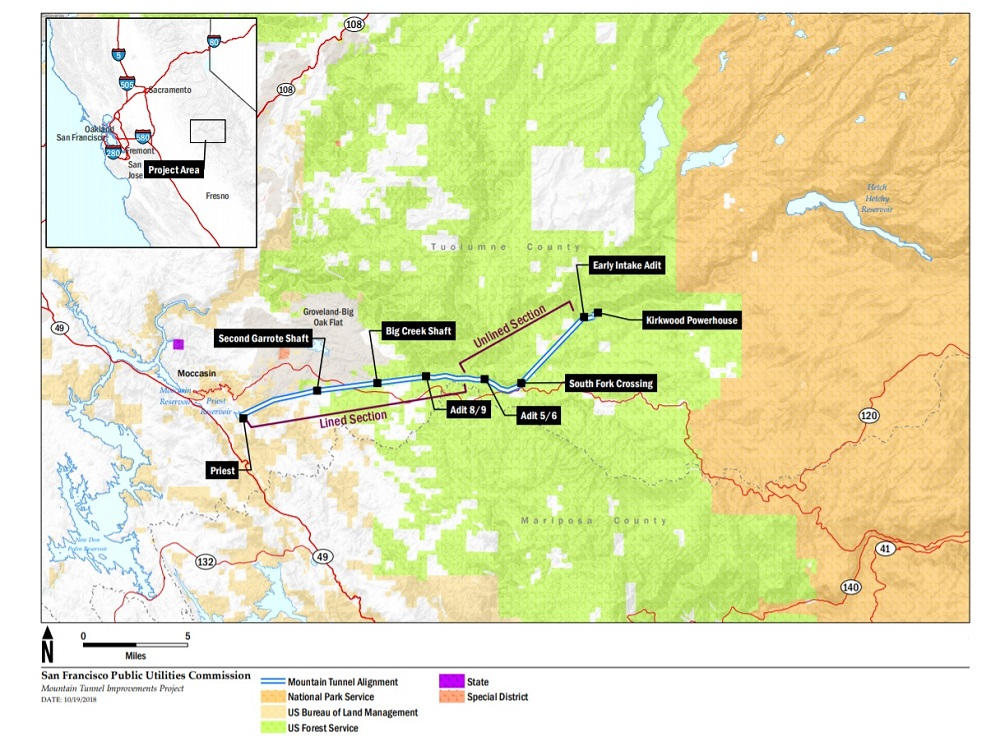 The San Francisco Public Utilities Commission (SFPUC) is set to start construction work on the Mountain Tunnel Improvements Project, a multi-year effort to upgrade and rehabilitate a critical component of the SFPUC Regional Water System that serves 2.7 million customers in the Bay Area.

“The water we provide our customers passes through miles of pipelines and tunnels before it reaches taps in the San Francisco Bay Area,” said SFPUC Acting General Manager Michael Carlin. “Portions of this system are aging. Initiatives like the Mountain Tunnel Improvement Project help ensure that our water is delivered safely, reliably and efficiently.”

Located in the Sierra Nevada foothills, Mountain Tunnel is a 19-mile-long water tunnel (which includes eight unlined miles through granite, and 11 miles lined with concrete) that has been serving the regional water system since 1925. The tunnel transmits Hetch Hetchy Reservoir drinking water from Kirkwood Powerhouse, where it generates hydropower, to Priest Reservoir downstream. Water flows entirely by gravity through this tunnel, a key part of the system that spans from Yosemite National Park to the San
Francisco Bay Area.

While Mountain Tunnel continues to serve the system well, it is over 90 years old and in need of rehabilitation. Recent inspections have shown deterioration in the tunnel lining, diminishing its ability to reliably transport water while increasing the need for maintenance.

Work on the tunnel will include:

• Removal of debris that has settled on the floor of the tunnel and is impeding hydraulic flow.
• Repair and grouting of defects in the 11 miles of existing tunnel lining.
• Installation of approximately 5,000 feet of concrete paving to unlined portions of the tunnel.
• Construction of a new downstream tunnel entry to facilitate future inspections and maintenance.
• Construction of a 750-foot bypass tunnel segment to reduce water infiltration at a key location.
• Addition of a new Flow Control Facility to increase operational flexibility and improve control of pressure functions.
• Access road and slope stabilization safety improvements and other related work.

Construction is slated to be finished at the end of 2026. When it is completed, the Mountain Tunnel will have improved water quality, restored hydraulic flow capacity, worker safety improvements, and an extended service life.