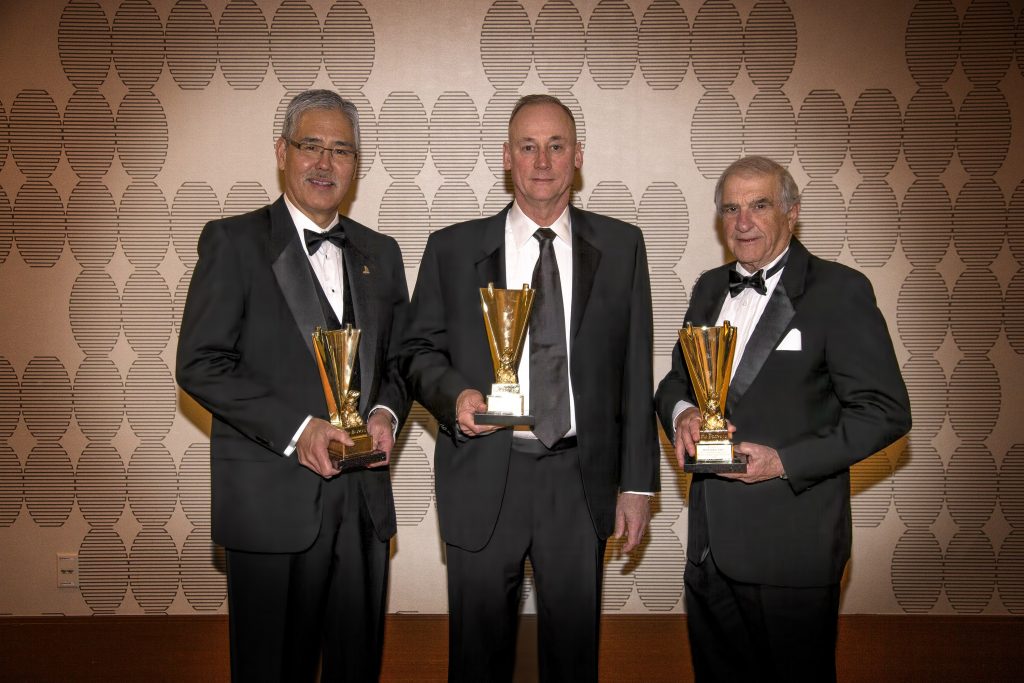 G. Michael Hoover, Chairman and CEO of Sundt Construction Inc. and 2018 President of The Beavers, served as master of ceremonies for the 2019 Golden Beaver Awards Dinner which was held Friday, Jan. 11, 2019, at the J W Marriott at L.A. Live in Los Angeles. The attendance of nearly 2,300 was the largest dinner in the 64-year history of the event.

The guest speaker was Anousheh Ansari, co-founder and chairwoman of Prodea Systems, a major pioneer in the connectivity of the home and the networking of businesses. Ansari and her family provided title sponsorship for the Ansari X Prize, a $10 million cash award for the first non-governmental organization to launch a reusable manned spacecraft into space twice within two weeks.

The Golden Beaver Management award was presented to Richard J. “Dick” Ames, founder and chairman of Ames Construction, Burnsville, Minnesota.  Due to a health issue, Richard’s brother Raymond “Butch” Ames accepted the award in his place. Dick started the company in 1962 as a one-man operation with a used 1954 Caterpillar D8. Within a few months he had enough work that Butch joined him as a partner. Their four other brothers and nephew also joined the company in the next few years. Over the next five decades the business has grown from a small, family-run business serving their local community to a large, nationwide contractor – still family-run – with over 2,500 employees.

Henry E. “Hank” Adams received the Supervision Award. A Construction Engineering Technology major from Fairleigh Dickinson University, Adams joined Peter Kiewit Sons’ Company as a field engineer on the Bolton Hill Station. Over the next 23 years he progressed through estimating, superintendent, project manager and job sponsor positions before being named area manager for Kiewit and Grow Tunneling Corp. In 2001 Adams became an assistant district manager then district manager for Kiewit’s Eastern District. He is now an executive vice president of Kiewit Infrastructure Group.

The Engineering Award recipient was Randell H. “Randy” Iwasaki, Executive Director of the Contra Costa Transportation Authority (CCTA) in the San Francisco Bay Area. Iwasaki, who earned his bachelor’s degree in civil engineering at California Polytechnic State University San Luis Obispo and master’s degree in engineering from California State University Fresno, is a registered engineer in California. He was named District 4 Director for the California Department of Transportation (Caltrans) in 2001, responsible for the nine Bay Area counties. In July 2004 he was appointed interim Director of Caltrans, then chief deputy director for five years before becoming Caltrans Director in 2009. In 2010 he accepted the CCTA position, overseeing over $3 billion of transportation projects and program.

James M. “Jim” Syar of Syar Industries Inc. received the Service and Supply Award. Syar is president of the company founded by his father C. M. “Tony” Syar in 1938. Jim earned his first paycheck at the age of 14 working on a paving crew. For the first 50 years the company was primarily a heavy engineering contractor, adding materials production through the years. In 1986 the company acquired Basalt Rock Company from Dillingham, making it a major materials producer. Under Jim’s guidance the company expanded its materials production in nine counties in Northern California. Of the 500+ employees there are many second generation and 30+ year career people, evidence of the “family” environment in the company and its commitment to the communities where it operates.