You are at:Home»News»Boring Complete on Anacostia River Tunnel 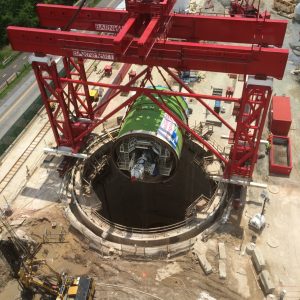 The TBM, named Nannie, completed the excavation of the Anacostia River Tunnel (ART) on Saturday, exactly one year and a day after she began mining on November 4, 2015.

The Lane Construction Corp., a U.S. subsidiary of the Salini Impregilo Group, together with its own subsidiary S.A. Healy Co., and Parsons (IHP JV) have completed the excavation of the 12,500-ft long Anacostia River Tunnel (ART) in Washington D.C., part of the U.S. capital city’s Clean Rivers Project aimed at reducing the pollution of its rivers.

The Clean Rivers Project for DC Water involves building a system of tunnels, sewers and other diversion structures to capture and treat sewage water. It aims to reduce pollution from combined sewer overflows to the city’s nearby rivers including the Anacostia and the Potomac.

The tunnel was designed with an inside diameter of 23 ft. It was excavated using a Herrenknecht EPB TBM. The tunnel runs south from a site near RFK Stadium to the Poplar Point Pumping Station. Its alignment is approximately 100 ft (below the surface and runs underneath the Anacostia River, CSX railroad tracks, the new Interstate 695, and the WMATA Green Line.

The ART completion date is Dec. 13, 2017. The JV will complete the project by constructing six shafts of varying sizes, four diversion structures, and three connecting adits of varying length. 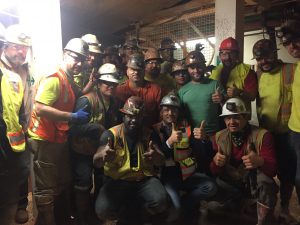 IHP JV staff celebrates the completion of mining on the Anacostia River Tunnel.

The $253 million tunnel is the latest major work to be completed in the United States by the Salini Impregilo Group, confirming its commitment to environmentally sustainable public works. Previous projects include the extension of a metro line in San Francisco as well as the hydraulic tunnel under Lake Mead to guarantee the supply of water to Las Vegas and the surrounding area.

“Our Clean Rivers Project team continues to push forward at an incredible pace, and the completion of this tunnel is another key milestone to celebrate,” said DC Water CEO and General Manager George S. Hawkins. “We applaud everyone who has played a part in keeping this work on schedule to meet our ultimate goal, which is cleaner water everyone can enjoy. That will be a great return on the investment our ratepayers are making in this massive project.”