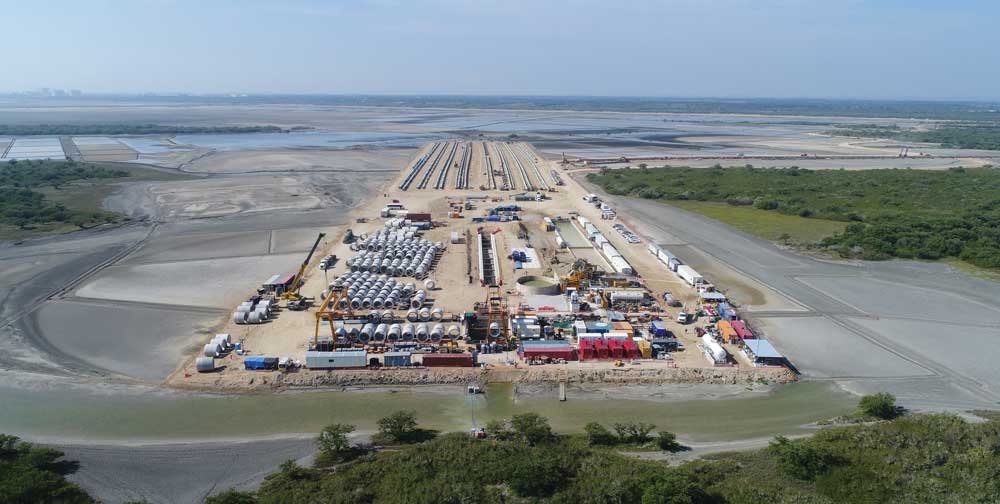 The Sur de Texas-Tuxpan gas pipeline is an offshore natural gas pipeline between Brownsville, Texas, and Veracruz, Mexico. The $3.1 billion project is being developed by the Federal Electricity Commission (CFE) of Mexico, and is the country’s first subsea pipeline.

A joint venture between TC Energy (formerly TransCanada) (60%) and Sempra Energy’s Mexican unit IEnova (40%) (known as Infraestructura Marina del Golfo or IMG) is constructing the project. The JV won a 25-year build-own-operate (BOO) contract from CFE in 2015. Construction of the nearly 500-mile long pipeline, mostly under the Gulf of Mexico, commenced in the port of Altamira, Mexico, in May 2017.

The pipeline will transport up to 2.6 billion cubic feet of natural gas a day, and will interconnect with a number of other proposed pipelines, including Nueces-Brownsville gas pipeline and Tuxpan-Tula gas pipeline. The pipeline is also expected to link with an existing network in Cenagas’s pipeline system in Altamira, as well as others in the region.

Altamira port will serve as the production and logistics center for the project, which will primarily transport gas to power plants operated by CFE in the Mexican states of Tamaulipas and Veracruz, as well as to various plants in the eastern, central and western regions of the country.

It will also supply natural gas to several power generation plants that are scheduled for construction, as well as existing facilities currently operating on fuel oil, which will be converted into natural gas-powered plants. 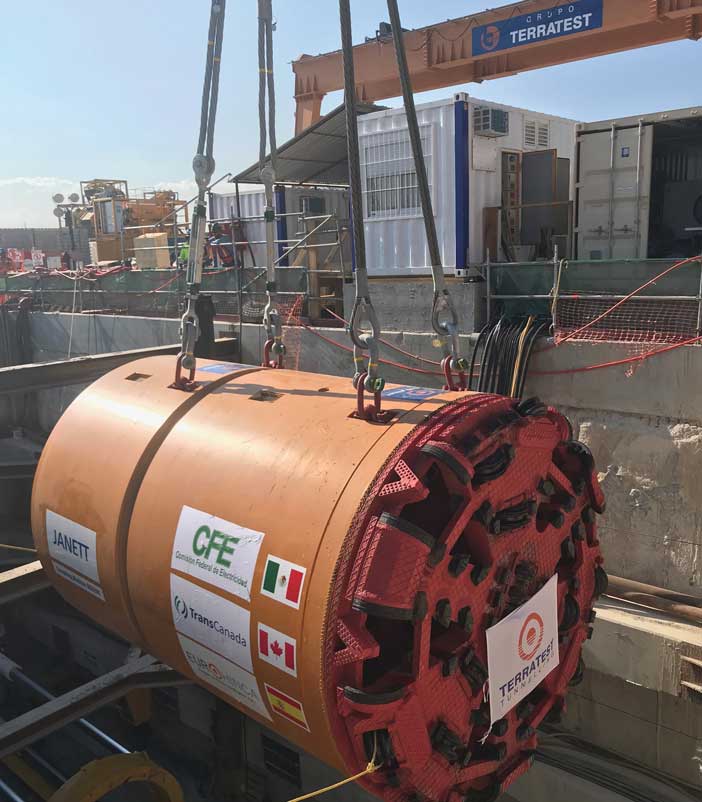 A key component of the Sur de Texas-Tuxpan project was the Altamira Landfall. This piece of work included a world record 7,360-ft microtunneling drive of 10.5-ft OD pipe connecting offshore pipeline installed by lay barge to the shore. The project required an underwater recovery in the Gulf of Mexico and also involved two vertical curves.

Coastal mangroves in the area of the landfall are protected by law prohibiting any disturbance, leading project officials to opt for the long trenchless installation. In addition to the microtunnel, the landfall required 6 HDDs and an additional 72-m bore to get the pipeline to the compressor station site.

The Altamira Landfall underwater tunneling contract was awarded to TERRATEST, a Spain-based ground engineering and tunneling multinational conglomerate. The tunneling works were executed by the wholly owned subsidiary Europea de Hincas Teledirigidas SA (Eurohinca). Eurohinca ranks among the most experienced contractors in outfall tunneling, having completed over 25 outfall projects worldwide.

TERRATEST is active in the U.S. market through GeoStructures Inc., based in Purcelville, Virginia, providing a range of ground improvement, structures and foundation support in addition to microtunneling.

Proposals were evaluated in fall 2015 with the contract signed in spring 2017 and work beginning on site in June 2017. Upon the completion of shaft construction in October 2017, the MTBM was commissioned in November 2017, and completed its drive on July 27, 2018. Pull-in of product pipe was completed in January 2019.

Crews used a Herrenknecht AVND2000 with Push-Module extension kit to achieve the historic drive. The Push-Module includes a rotary ring erector to install precast segments as a contingency method. Crews recorded a best daily performance of 25.5 m, and a best weekly performance of 111.2 m. The 2,246-m drive eclipsed the company’s 2013 Black Sea outfall by more than 200 m as its longest project.

TERRATEST not only completed the tunnel at Altamira Landfall but built the launching shaft, the ramp to allow the bundle installation and conducted other civil works such as foundations for the gantry cranes and auxiliary equipment. Crews elected to use a double jacking frame to be able to push up to three segments of RCP at once.

Many challenging aspects of the $55 million USD tunneling project were successfully overcome, such as tunnel completion having a very low skin friction (0.4 kN/m2) and an average jacking force of (0.65 T/m); the bundle was effectively installed inside the tunnel (which involved two 42-in. gas transmission pipelines and one 24-in. water line); and both the TBM and Push-Module were successfully recovered from the seabed. 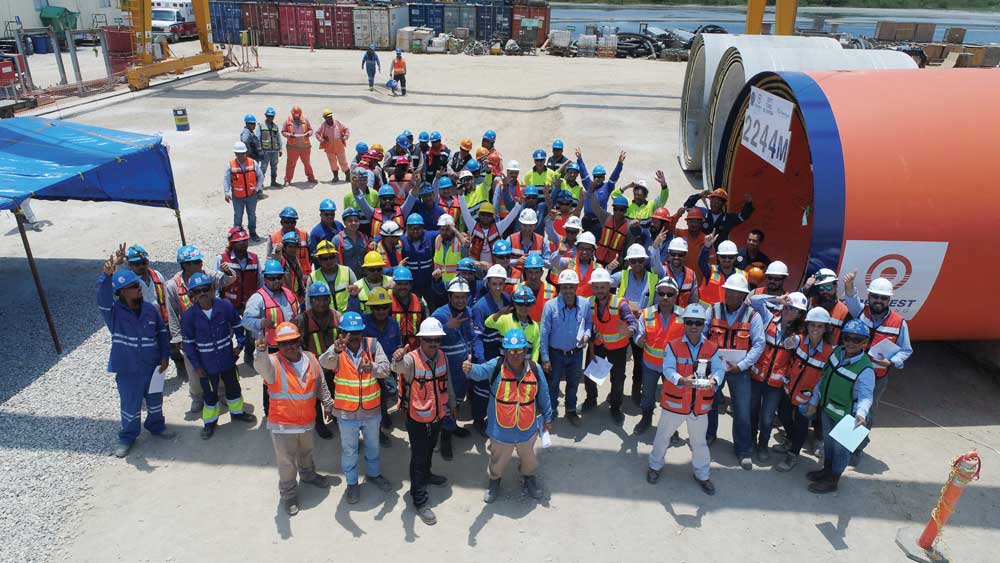 Like any challenging project, the Altamira Landfall project took a team of partners and suppliers working together to make the job a success.

In addition to the Herrenknecht AVN2000 + Push-Module, TERRATEST used reinforced concrete jacking pipe (ID/OD 2600/3200 mm) from Grupo Fabrega Consolis. A total of 766 pipes were installed, along with 21 Intermediate Jacking Stations (IJSs) installed. Of the 21 IJSs installed, four were activated.

For solids control, the contractor used one Scalping Screen GS-500 (Bauer), two Separation Plants (one MAB-500 (Schauenburg) and one BE-425 (Bauer)), one Centrifuge BD-90 and Flocculant Unit (Bauer), and one Filter Press SP1500 (Tecofil).

Additional equipment was deployed on site due to encountered geology, specifically an unexpected amount of fines, silt and clay. This included one desander, one desilter and one centrifuge.

Besides the above-mentioned equipment, diaphragm wall and bored piling equipment, miscellaneous earth moving equipment, three gensets of 1260 kVA and two gensets of 800 kVA were deployed as well as other auxiliary equipment for both operation (gantry cranes, mixers, water storage tanks and so forth) and contingency.

In dealing with the challenging and unexpected soil conditions that affected lubrication and slurry, TERRATEST worked with Baroid for field support and additives. Also, Jackcontrol supplied hydraulic joints to assure that jacking forces were distributed evenly and avoid damage to the pipe string during construction. This proved critical as at one point the MTBM got stuck for a week before crews were able to get the pipe string moving again. At the end of the project, crews were recording 900 tons of jacking force at the end of the tunnel.

Record Microtunnel at a Glance