You are at:Home»News»Consortium Closes on Ontario Line RSSOM Contract 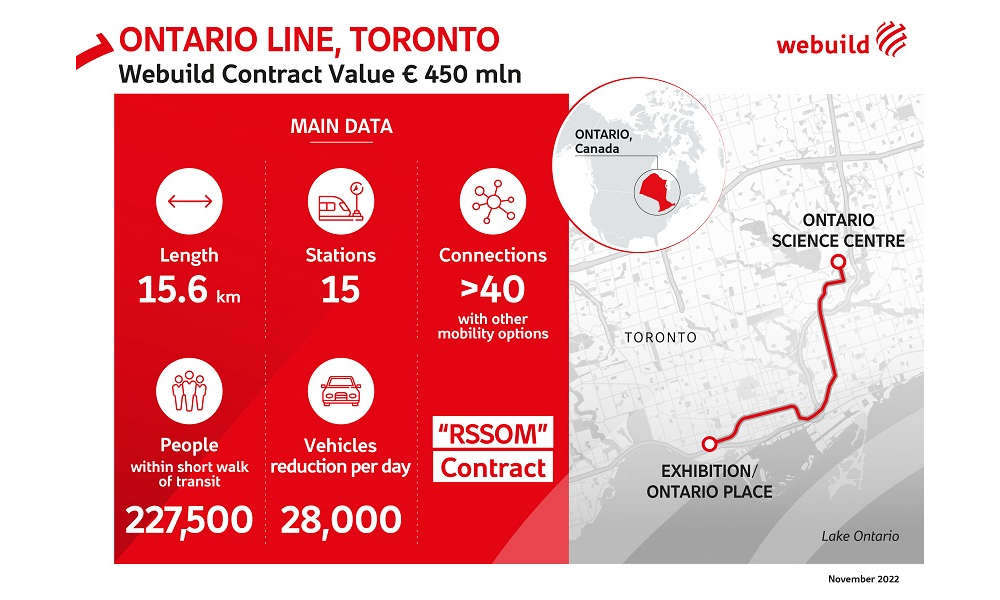 Webuild is moving ahead with a new sustainable mobility project in Canada after the Group and its Connect 6ix consortium partners reached financial closure on a contract to deliver the Rolling Stock, Systems, Operations and Maintenance (RSSOM) for the Ontario Line, a new rapid transit line that will cross downtown Toronto, Canada. Webuild, part of the consortium named preferred bidder in September, will have a stake of 65% valued at €450 million ($460 million US) in the joint venture that will do the civil works, and a 10% stake in the Connect 6ix project company.

The contract is the latest result of Webuild’s de-risking strategy. With its focus on core markets with low-risk profiles, the Group has generated 10% of new orders and those being finalized in Italy so far this year, 28% in Europe, 15% in North America and 34% in Australia. Webuild’s commercial activity is set to mark another positive year, following the results achieved in 2021. These new orders include complex projects that will have a major impact on the communities that they will serve, such as a road system between Bergen and the island of Sotra in Norway, the A303 Road near Stonehenge in the United Kingdom, and the Inland Rail project in Australia.

Commissioned by Infrastructure Ontario and Metrolinx, the RSSOM contract will be executed as a public-private partnership (PPP), and includes the design and construction of the rails for the tunnels of the Ontario Line, as well as the signaling, communications and safety systems. It also involves subsequent management and maintenance services. It is one of several contracts being awarded for the construction of the line, which will connect the Ontario Science Centre in the northeast of the city with Exhibition/Ontario Place in the southwest by the shore of Lake Ontario. The line, half of which will be underground, will be 15.6 kilometres long with 15 stations. It will have more than 40 connections to other metro lines, regional trains and bus services, increasing the options for sustainable mobility across the city.

A major transit project for the Greater Toronto and Hamilton Area, the Ontario Line will put fast, reliable transit within walking distance of 227,500 residents. It will also bring benefits in terms of sustainability by helping eliminate up to 28,000 vehicles on its roads every day, reducing traffic congestion and CO2 emissions with 7.2 million litres less fuel consumed every year. The line is also expected to create thousands of jobs annually during its construction.

The RSSOM contract is the second sustainable mobility project being developed by Webuild in Canada. The Group also belongs to the Mobilinx consortium that is building the Hurontario light rail transit line near Toronto. It will run for 18 km along Hurontario Street from Port Credit in the city of Mississauga to the Brampton Gateway Terminal in the city of Brampton.

Webuild has built more than 13,600 km of rail and metro lines throughout the world. It recently delivered Perth Airport Line, formerly known as the Forrestfield-Airport Link, in Perth, Australia, a rail line connecting the eastern suburbs to the city center via the airport. The Group is building the M4 Line in Milan between the city airport and the historic center. It is also working on a section of Line 16 for the Grand Paris Express, the biggest sustainable mobility project in Europe.