Sophia, Crossrail’s fifth tunnelling machine, began her journey from Plumstead to North Woolwich on Jan. 9 as part of the construction of a tunnel under the River Thames for London’s new rail link.

The 110-m long machine is scheduled to drill at an average rate of around 100 m a week, installing precast concrete segments as rings to form the tunnel lining as it advances forwards.

When Crossrail opens, up to 12 trains per hour during the peak will link southeast London and the Royal Docks with Canary Wharf, central London and beyond – and will enable local residents to get to and from London’s key employment areas much more quickly and easily.

Passengers in southeast London will benefit from some of Crossrail’s most significant time savings. With Crossrail, the journey from Abbey Wood to Bond Street will be around 20 minutes quicker and passengers travelling to Heathrow will be able to shave around 40 minutes off their journey.

Sophia is different from the tunneling machines being used elsewhere on Crossrail. The slurry TBM is specially equipped to deal with the chalk, flint and wet ground conditions that it will encounter in southeast London.

As part of the tunneling process, the excavated soils will be pumped out as liquid slurry to a special treatment plant at Plumstead. The slurry will be separated into sand, gravel, water and chalk. The chalk will come out in cakes or slabs of filtered chalk particles. 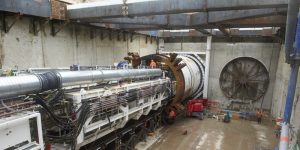 “The start of tunnelling in southeast London marks another milestone for Crossrail, a project that will transform public transport in and around the capital,” said Andrew Wolstenholme, Crossrail’s Chief Executive. “The benefits for southeast London are huge. For the first time people living between Abbey Wood and the Royal Docks will be able to travel right through the center of the capital without having to change trains, bringing Canary Wharf, the West End and Heathrow closer than ever before.”

Across the whole Crossrail project, eight TBMs will construct 21 km of twin tunnels under London. The Crossrail route will pass through 37 stations and run 118 km from Maidenhead and Heathrow in the west, to Shenfield and Abbey Wood in the east.

Sophia’s sister machine, Mary, is scheduled to start tunneling in mid-2013, and will construct a second tunnel alongside the first. Joint Venture Hochtief Murhpy is constructing the southeastern tunnels between Plumstead and North Woolwich.