You are at:Home»News»DEP Announces Breakthrough on Delaware Aqueduct Repair Project 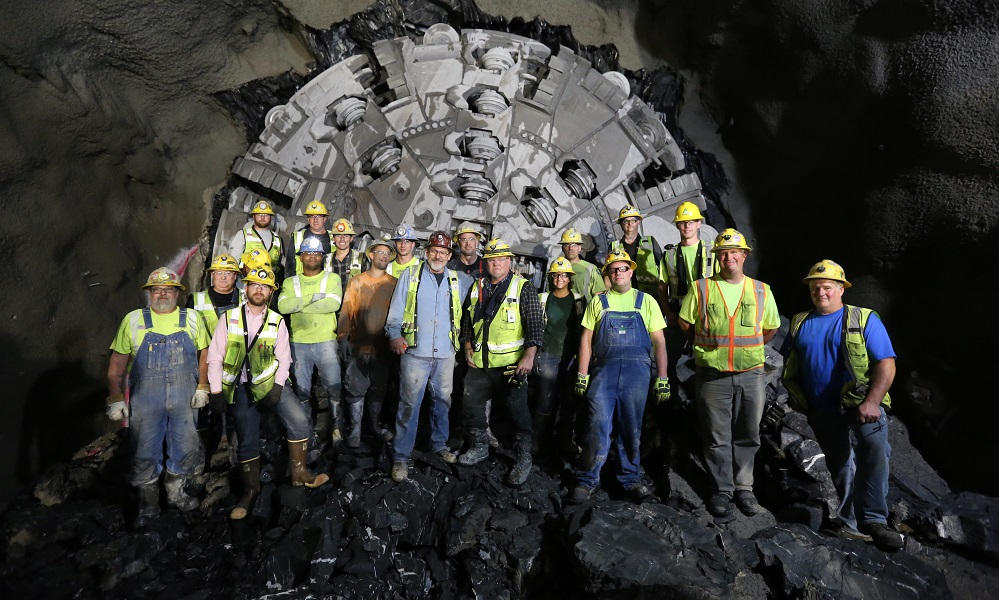 The New York City Department of Environmental Protection has completed excavation of the Delaware Aqueduct Bypass Tunnel, a significant milestone in the $1 billion effort to repair leaks in the longest tunnel in the world. The moment, known as “holing through,” happened when a Robbins tunnel boring machine broke through a wall of shale bedrock nearly 700 ft beneath the Town of Wappinger in Dutchess County. Excavation of the tunnel was completed on budget and ahead of schedule.

“I want to congratulate the engineers, project managers and local laborers who steered us toward this milestone with considerable skill and precision,” DEP Commissioner Vincent Sapienza said. “Holing through is a major achievement for any tunneling project, especially one as large and complex as our repair of the Delaware Aqueduct. The moment is also a reminder that much work remains to be done as we move steadily toward completing this project in 2023 and ensuring the long-term reliability of the water supply system that sustains 9.6 million New Yorkers every day.”

The Delaware Aqueduct Bypass Tunnel is the largest repair project in the 177-year history of New York City’s water supply system. Its centerpiece is a 2.5-mile-long bypass tunnel that DEP is building 600 ft under the Hudson River from Newburgh to Wappinger. When the project is finished in 2023, the bypass tunnel will be connected to structurally sound portions of the existing Delaware Aqueduct on either side of the Hudson River to convey water around a leaking section of the tunnel. The 85-mile-long Delaware Aqueduct, the longest tunnel in the world, typically conveys about half of New York City’s drinking water each day from reservoirs in the Catskills. 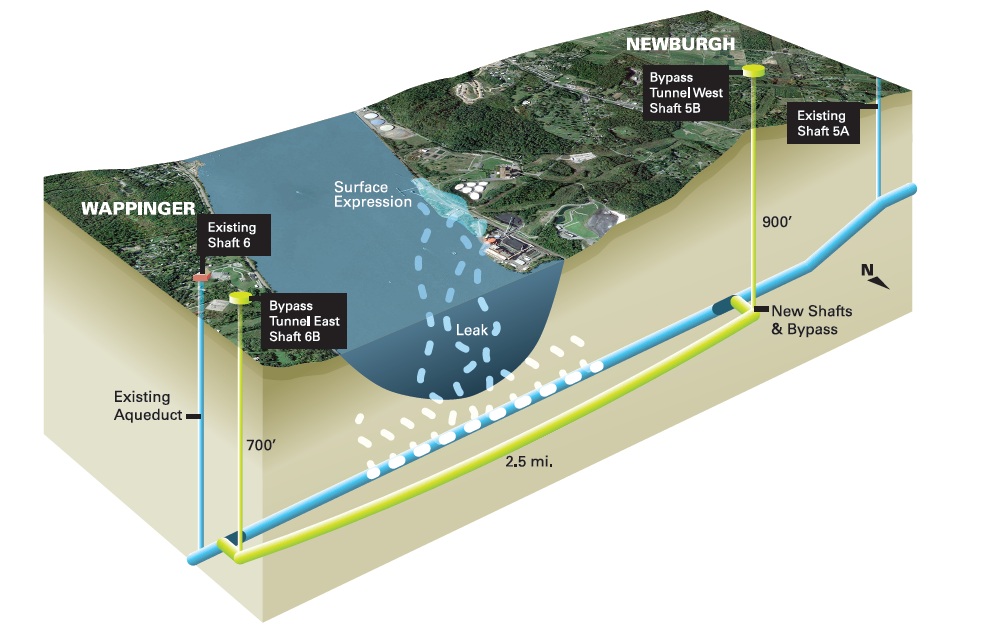 A massive tunnel boring machine began to excavate the tunnel on Jan. 8, 2018. The tunneling machine mined 12,448 ft during the 582 days that it pushed eastward from its starting point nearly 900 ft below the surface in the Town of Newburgh in Orange County. According to data tracked by DEP, the machine excavated 89.8 lf on its most productive day, 354.8 ft during its best week, and 945 ft during its most productive month. The tunnel boring machine excavated through three bedrock formations, starting with the Normanskill shale formation on the west side of the Hudson River, the Wappinger Group limestone formation, and finishing in the Mt. Merino shale formation on the east side of the river. The location and condition of these bedrock formations was well documented by New York City when it originally built the Delaware Aqueduct in the 1930s and 1940s. Engineers used that historical information to design the tunnel boring machine for the bypass tunnel and plan for its excavation.

As the tunnel boring forged ahead, it also lined the shale and limestone bedrock with precast rings of concrete. A total of 2,488 concrete rings were installed by the machine. Now that mining is finished, DEP will begin to install 16-ft diameter steel liners inside the first layer of concrete. After the 230 steel liners are installed and welded together, they will be coated with a second layer of concrete. This “triple-pass” design will provide the bypass tunnel with structural stability and prevent leaks from occurring again in the future. During the excavation, the tunnel boring machine was driven, maintained and supported by dozens of local laborers who worked 24-hours, six days a week. They operated cranes, trucks and underground trains to collect the pulverized rock and haul it to the surface. They removed and replaced cutting discs on the front of the machine, and maintained the many complex systems that kept the tunnel boring machine functioning properly.

The Delaware Aqueduct Bypass Tunnel is the first tunnel built under the Hudson River since 1957, when the south tube of the Lincoln Tunnel was finished.

Kiewit/Shea Constructors was the contractor, with a winning bid of $706,605,852. The construction manager is Parsons. 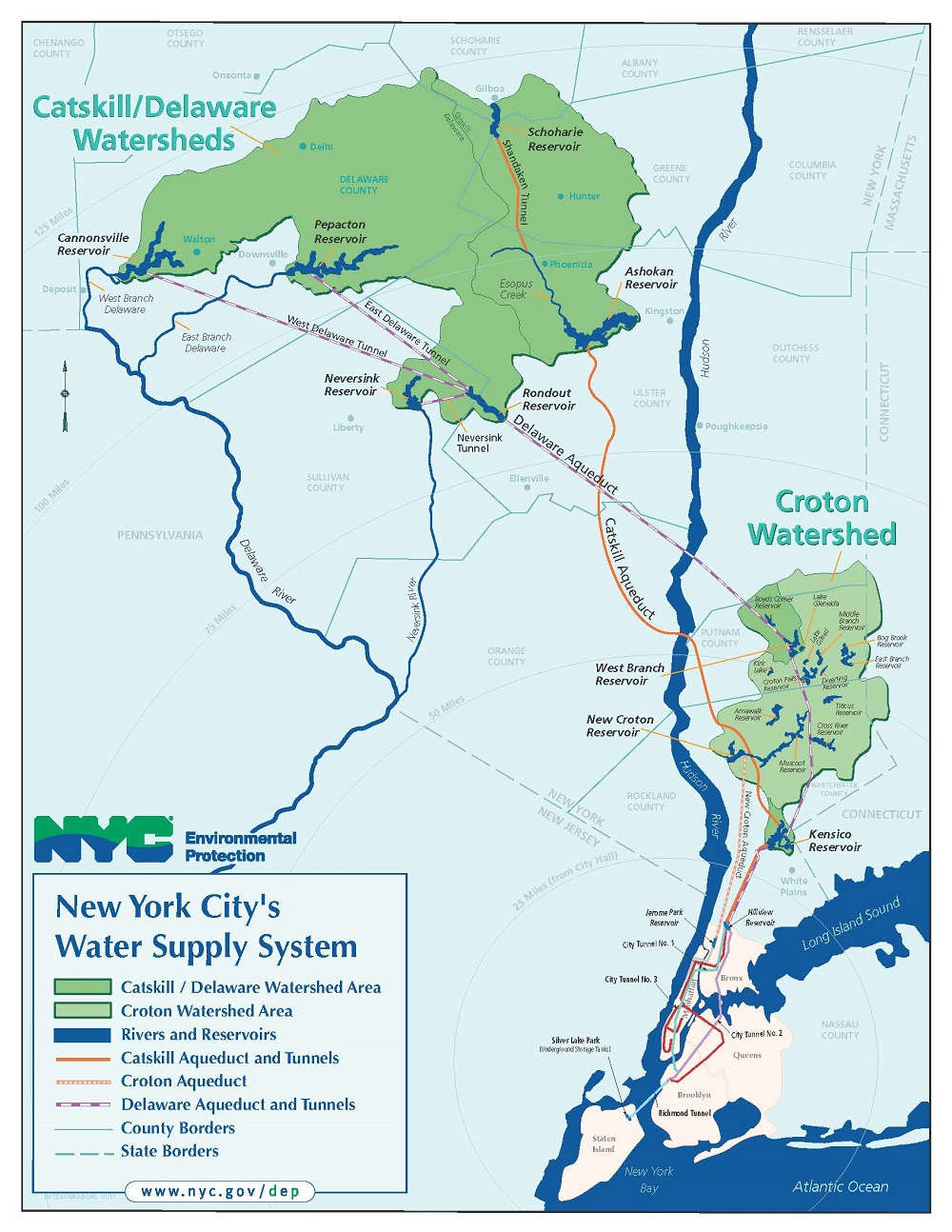 DEP has monitored two leaking sections of the Delaware Aqueduct – one in Newburgh, and the other in the Ulster County town of Wawarsing – since the early 1990s. The leaks release an estimated 20 million gallons per day, about 95 percent of that escaping the tunnel through the leak near the Hudson River in Newburgh. DEP has continuously tested and monitored the leaks since 1992. The size of the cracks in the aqueduct and the rate of leakage have remained constant over that time.

In 2010, the City announced a plan to repair the aqueduct by building a bypass tunnel around the leaking section in Newburgh, and also by grouting closed the smaller leaks in Wawarsing. The project began in 2013 with the excavation of two vertical shafts in Newburgh and Wappinger to gain access to the subsurface. These shafts, 845 and 675 ft deep respectively, were completed in 2017. Workers then built a large underground chamber at the bottom of the Newburgh shaft. That chamber has served as the staging area for assembly and operation of the tunnel boring machine, and as the location from which excavated rock is brought to the surface by underground trains and a large crane.

The project will mark the first time that the Delaware Aqueduct will be drained since 1958. In 2013, DEP installed new pumps inside a shaft at the lowest point of the Delaware Aqueduct to dewater the existing tunnel before it is connected to the new bypass tunnel. Those pumps will be tested several times before the tunnel is drained in 2022. The nine pumps are capable of removing a maximum of 80 million gallons of water a day from the tunnel—more than quadruple the capacity of the pumps they replaced from the 1940s. The largest of the pumps are three vertical turbine pumps that each measure 23 ft tall and weigh 9 tons.

The Delaware Aqueduct Bypass Tunnel was excavated by one of the world’s most advanced tunnel boring machines (TBM). The machine – which measures more than 470 ft long and weighs upwards of 2.7 million pounds – was named in honor of Nora Stanton Blatch Deforest Barney, a noted suffragist and the first woman in the United States to earn a college degree in civil engineering. Nora, who worked for the City’s as a draftsperson during the construction of Ashokan Reservoir, was also the first female member of the American Society of Civil Engineers.

The $30 million TBM, built at Robbins’ Solon, Ohio, facility, arrived at the worksite in Newburgh in 2017. It was delivered in 22 pieces and took four month to assemble. The 21.6-ft diameter TBM was built to withstand more than 30 bar of pressure – believed to be the most of any TBM ever manufactured. (That’s about 11 times the amount of pressure from a garden hose.) The machine needed to withstand high pressure because workers encountered huge inflows of water under immense pressure when the aqueduct was first built more than 70 years ago. The TBM was equipped with pumping equipment to remove up to 2,500 gallons of water per minute away from the tunnel as the machine pushed forward. The TBM was also outfitted with equipment to install and grout the concrete lining of the tunnel, and to convey pulverized rock to a system of railroad cars that followed the TBM as it works. The railroad cars regularly traveled back and forth between the TBM and the bottom of Shaft 5B in Newburgh, delivering workers, equipment and rock between the two locations.

About the Delaware Aqueduct

The Delaware Aqueduct is an 85-mile-long tunnel that delivers drinking water from Rondout Reservoir in Ulster County to Hillview Reservoir in Yonkers. The aqueduct typically conveys about 50 percent of New York City’s drinking water. The Delaware Aqueduct put into service in 1944 when New York City Mayor Fiorello H. La Guardia opened a set of emergency gates to channel the Rondout Creek directly into the new aqueduct. It was placed into emergency service that year to support efforts related to World War II. The Delaware Aqueduct is the longest tunnel in the world, approximately 11 miles longer than a water tunnel build in the early 1980s in Finland.

DEP manages New York City’s water supply, providing more than 1 billion gallons of high-quality water each day to more than 9.6 million New Yorkers. This includes more than 70 upstate communities and institutions in Ulster, Orange, Putnam and Westchester counties who consume an average of 110 million total gallons of drinking water daily from New York City’s water supply system. This water comes from the Catskill, Delaware, and Croton watersheds that extend more than 125 miles from the City, and the system comprises 19 reservoirs, three controlled lakes, and numerous tunnels and aqueducts.

DEP has nearly 6,000 employees, including almost 1,000 scientists, engineers, surveyors, watershed maintainers and other professionals in the watershed. In addition to its $70 million payroll and $168.9 million in annual taxes paid in upstate counties, DEP has invested more than $1.7 billion in watershed protection programs—including partnership organizations such as the Catskill Watershed Corporation and the Watershed Agricultural Council—that support sustainable farming practices, environmentally sensitive economic development, and local economic opportunity. In addition, DEP has a robust capital program with $20.1 billion in investments planned over the next decade that will create up to 3,000 construction-related jobs per year.