A cofferdam was used during construction to prevent water from entering the work zone on City Island, while the yellow turbidity barrier prevents unwanted discharge from the work area into Eastchester Bay.

The NYC Department of Environmental Protection (DEP) Commissioner Rohit T. Aggarwala and NYC Department of Design and Construction (DDC) Commissioner Thomas Foley announced the completion of a $34 million project to upgrade the drinking water connection to City Island in the Bronx. Two new water mains have been placed under Eastchester Bay to ensure a reliable supply of water for the residents and businesses located on the Island. Work included the use of horizontal directional drilling technology to create a passage for the new pipes beneath the Bay.

“New Yorkers are made of the ‘best stuff on Earth,’ and the water we drink is and must be part of that,” said New York City Mayor Eric Adams. “Thanks to the team’s strategic and creative work, the residents and small businesses of City Island will have reliable access to the clean drinking water they deserve.”

“This $34 million infrastructure investment will ensure that the residents, businesses and visitors to City Island have a reliable supply of high quality drinking water for generations to come,” said NYC Department of Environmental Protection (DEP) Commissioner Rohit T. Aggarwala. “This complex project included tunneling under Eastchester Bay and I want to thank our partners at DDC for overseeing this complicated and environmentally sensitive work.”

“Tunneling under Eastchester Bay was a complicated project that will ensure a reliable water supply for City Island for decades to come,” said NYC Department of Design and Construction (DDC) Commissioner Thomas Foley. “I commend the DDC staff for their diligence in working through the pandemic and for their dedication to environmental protection and ensuring that the work did not disturb environmentally sensitive areas nearby.” 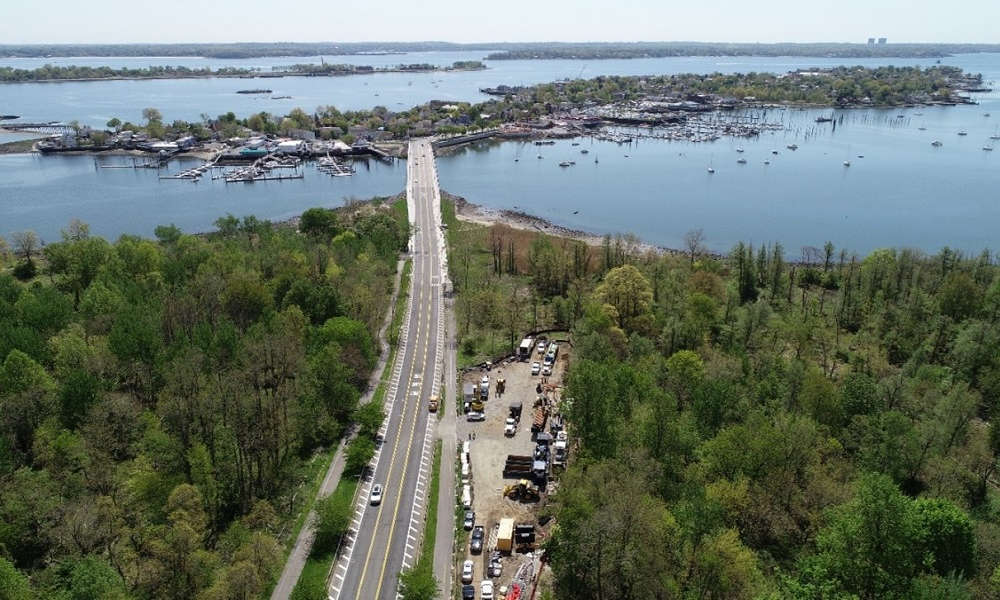 The construction area on the mainland in Pelham Bay Park is where two 20-inch water mains were installed under Eastchester Bay to increase the reliability of City Island’s drinking water supply.

During construction, engineers utilized horizontal directional drilling technology to create two 2,000-ft pathways under Eastchester Bay for the pipes to travel from the Rodman’s Neck peninsula on the mainland toward City Island. The process included boring a pilot hole from one surface point to another, expanding that hole to the appropriate diameter to accommodate the pipes being installed, grouting into place a steel sleeve that stabilizes the tunnel that has been created and then pulling the water main pipes through the enlarged hole. Work on City Island itself included the construction of a receiving pit where the new pipes would tie into the local water main distribution system.

The new pipelines replace an older 12-in. subaqueous water main and a temporary 16-in. main that was previously installed on the City Island Bridge, and which has been removed. Construction also included the addition of new fire hydrants on Pelham Bay Park and City Island.

The bike path on City Island Bridge and the bike path that connects Pelham Bay Park to City Island were restored. The pedestrian pathway to connect the Catherine Scott promenade to the Pelham Bay bike path was restored with asphalt hexagonal pavers.

The project received a Diamond award in the water resources category during the American Council of Engineering Companies of New York’s 2022 Engineering Excellence Awards. The project was also named “2021 Project of the Year” in the $25-100 million category by the Construction Management Association of America’s NY/NJ Chapter (CMAA) for providing safe and reliable drinking water to 4,500 residents in City Island.

The project was designed by Dewberry, the design was carried out by Northeast Remsco Construction, Inc. and engineering services were provided by McMillen Jacobs Associates. The project, which began June 2019 and reached substantial completion in December 2021, was funded by DEP and managed by DDC.