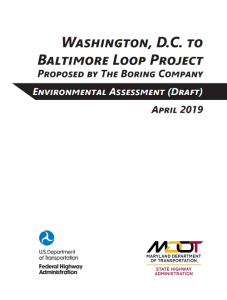 The U.S. Department of Transportation (DOT) on April 17 announced the availability of a draft version of the Environmental Assessment for the Washington, D.C., to Baltimore Loop Project, the first step in a joint federal-state review of a non-traditional transportation technology.

The Boring Company, of Hawthorne, CA, is considering the future development of a privately funded, underground, high-speed tunnel facility to help alleviate area congestion. The proposed project would consist of twin, underground tunnels approximately 35 miles in length between Washington, D.C., and Baltimore, Maryland, which in part would follow the right-of-way under the Baltimore Washington Parkway. The proposed station terminals would be located on New York Avenue (northwest of Union Station) in D.C. and in the Camden Yards area in downtown Baltimore.

“The publication of a draft environmental assessment for this unique project demonstrates the Department’s commitment to preparing for the future of transportation across all modes,” said U.S. Secretary of Transportation Elaine L. Chao.

The release of the Environmental Assessment coincides with the launch of DOT’s new Non-Traditional and Emerging Transportation Technology (NETT) Council, an internal deliberative body tasked by the Secretary to identify jurisdictional and regulatory gaps arising from DOT’s review of new transportation technologies.

The Environmental Assessment for the Loop project has been prepared to determine whether the proposed project would have significant environmental impacts, and is considered an early milestone in the environmental review and permitting process. By releasing this assessment, DOT (through the Federal Highway Administration) and the Maryland Department of Transportation (acting also on behalf of the District of Columbia) are seeking public review and comment on environmental considerations for the proposed project. Final governmental approvals will depend on the outcome of the review and comment process and any subsequent modifications. Both agencies noted that operational safety issues will be addressed in future studies, as will the ultimate engineering and design details.