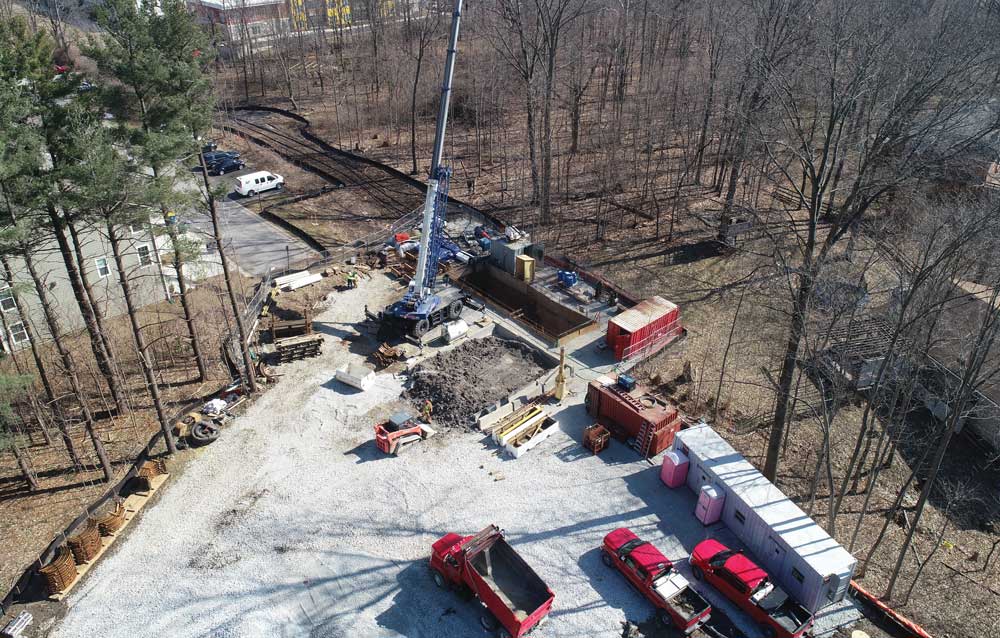 Midwest Mole’s contract involves constructing the 2,100-ft tunnel from a pit in a residential/commercial area.

After years of collaboration between the City of Fishers, City of Noblesville, Hamilton County and Indiana Department of Transportation (INDOT) to address the traffic congestion and public safety challenges along the State Road (SR) 37 corridor, plans are underway to rehabilitate the corridor from 126th Street to 146th Street.

SR 37 is a four-lane, north-south corridor serving the residents of Hamilton County, the City of Fishers and the City of Noblesville in suburban northeastern Indianapolis. It is currently owned and operated by INDOT.

Hamilton County is the fastest-growing county in Indiana. The population of Fishers grew from 7,508 in 1990 to over 90,000 today, and Noblesville’s population grew from 17,655 to over 60,000 in the same timeframe. More than 50,000 vehicles now travel the corridor each day, and they are regulated at each of the cross streets with traffic signals that are becoming more overloaded as time passes.

Using a technique pioneered elsewhere in the region, SR 37 will be converted from a surface street to a freeway by constructing tight roundabout interchanges at existing intersections (plus one larger interchange) and depressing the SR 37 roadway. This allows the road to be upgraded to a freeway with limited displacement and for far less cost than constructing a new freeway.

In advance of SR 37 roadway improvements, infrastructure needs to be constructed to drain water from the newly depressed roadways. In October 2018, Midwest Mole, of nearby Greenfield, Indiana, was given Notice to Proceed on a project to build a 2,100-ft long, 84-in. excavated diameter tunnel for drainage improvements.

For the SR 37 project, Midwest Mole’s contract involves constructing the 2,100-ft tunnel from a pit in a residential/commercial area, tunneling eastward to SR 37. As general contractor for the project, Midwest Mole was also responsible for site access construction, as well as a building a detention pond and outlet facility to Shoemaker Ditch.

Midwest Mole elected to use an Akkerman 84-in. tunnel boring machine (TBM) to construct the tunnel, which is supported with steel ring beams and wood lagging. Upon completion of the tunnel, crews will install 54-in. fiberglass pipe from Hobas Pipe as the final liner, grouted in place with cellular grout.

Because of the length of the tunnel – among the longest the company has built – Midwest Mole made some modifications to the machine. Crews extended the muck conveyor system to about 90 ft to accommodate a three-car muck train, allowing more efficient mucking and excavation.

“We were fortunate that we were able to bring power to the site to help keep it quiet – that was especially important because we were in immediate proximity to residents,” said Mike Liotti, project engineer for Midwest Mole. “In some places bringing power to the site can be a challenge, but in this case there was an existing high-voltage power drop for an ice rink within 700 ft of our main working site.”

Also, to reduce impact on residents, the contractor has limited working hours from 7 a.m. to 9 p.m., with Midwest Mole’s typical work day going from 7 a.m. to 7 p.m. 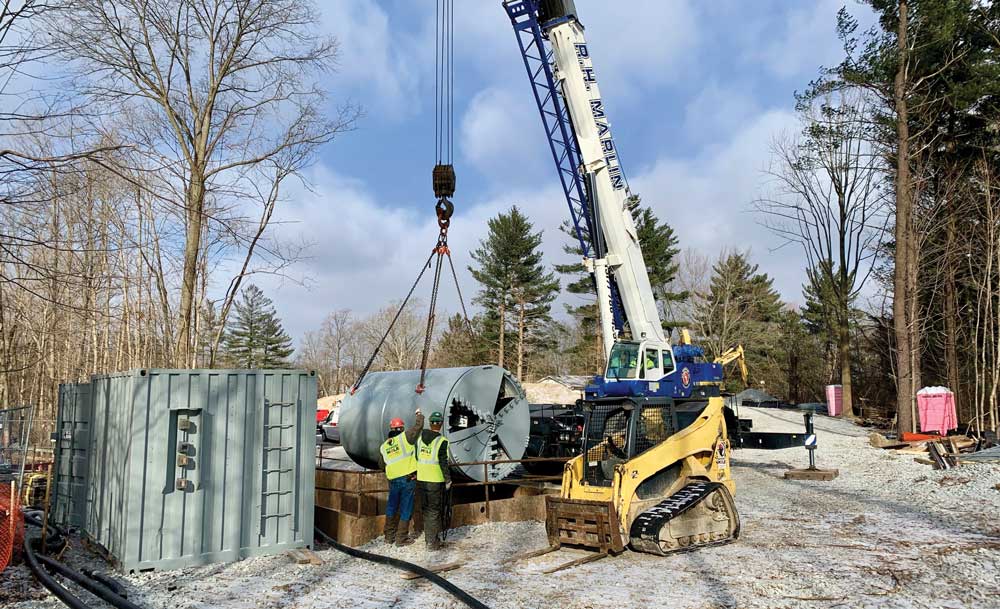 Midwest Mole elected to use an Akkerman 84-in. tunnel boring machine to construct the tunnel.

The main work pit was built using trench boxes and is approximately 44 ft long by 14 ft wide. Based on ground investigation, the geology along the alignment was expected to be primarily glacial till – fairly common for the Indianapolis area but also very complex. The till comprises pockets of water and sand and is interlaced with boulders.

“What is interesting about the ground is that there are not connected layers of geology – just pockets of different ground types and groundwater,” Liotti said. “You can be tunneling along and then suddenly you’re in a completely different type of ground in as little as 10 ft. It’s a very challenging environment for tunneling.”

Because of the variable ground, a closed face was specified. While the closed face is helpful in controlling the face of the tunnel in sandy and running conditions, it also makes it more challenging to deal with boulders.

To help break up boulders so they can pass through the cutterhead, crews are using the Micro-Blaster product from EzeBreak. Micro-Blaster, also used by demolition contractors, requires drilling a small hole into the boulder before activating a small blast or series of blasts to break up the rock. The small size of the blast hole eases the task of drilling, especially in cases where a boulder may be encountered in soft ground conditions.

Three manholes are included in the project: one will be at the main work pit, one at the terminus, and one intermediate manhole at approximately 1,300 ft from the work pit. Midwest Mole expected to complete tunneling work in late July, and has a final completion date of May 2020 for site restoration, etc.