You are at:Home»News»International News»Financial Closure Reached on Sotra Connection PPP Project in Norway 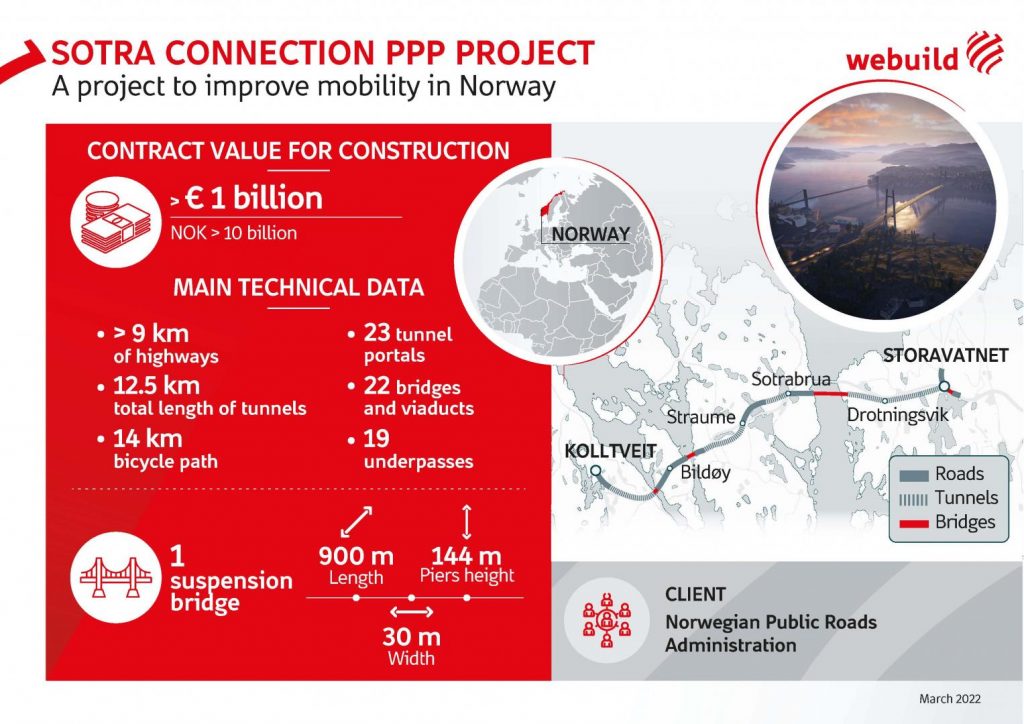 Webuild, part of Sotra Link AS, has reached financial closure on the Sotra Connection PPP Project, which includes the financing, design, construction and multi-year maintenance of a network of roads, tunnels and bridges in western Norway. Located in the Vestland county, the public-private partnership (PPP) contract, with a combined total value of NOK 19.8 billion (€2.0 billion/$2.2 billion US), more than €1 billion of which for design and construction, will improve mobility between Bergen and the island of Sotra on the west coast. It is the largest transport contract in Norwegian history to date.

The design and construction of the project will be done by an international consortium of builders including Webuild with a 35% stake, Spain’s FCC Construcción with 35% and South Korea’s SK ecoplant with 30%. The entire contract is being led by Sotra Link AS, with Webuild holding a 10% stake, Macquarie Capital with 70% and SK ecoplant at 20%. Sotra Link AS will operate and maintain the network for 25 years after it opens to traffic in 2027. The Client is Norwegian Public Roads Administration (NPRA).

The network to be built will include more than 9 km of highway and a suspension bridge. The bridge will be 30 m wide and 900 m long including access ramps, and towers 144 m high, equivalent to an approximately 50-story skyscraper. There will also be a total of 12.5 km of primary and secondary tunnels, as well as road and pedestrian underpasses, tunnel portals, smaller bridges and viaducts, and pedestrian and bicycle paths.

The project has a strong emphasis on sustainability, as required by the criteria set under the Climate Budget at the stage of the tender process. The solutions proposed by Sotra Link AS will reduce by a quarter the CO2 emissions foreseen during the production and supply of materials, and the construction of the network.

The project is part of Webuild’s strategy to expand in markets considered to be low risk and where large investments are being made in infrastructure, especially Europe. In Norway, the Group is working on a project to upgrade a 13.6-km section of a rail line between the towns of Nykirke and Barkåker in the Vestfold region to the south of Oslo, where on March 4, 2022, Webuild (Sapinor) celebrated with the client Bane Nor and with the local authorities the completion of the tunneling works.

As a leader in the infrastructure sector, Webuild has a track record that includes the construction of more than 80,200 km of roads and highways, the excavation of more than 2,300 km of tunnels and the construction of bridges and viaducts for a combined length of 946 km. Iconic works include the Genova-San Giorgio Bridge in Genoa, Italy; the bridge and viaduct for Sydney Metro Northwest in Australia; the third bridge over the Bosphorus in Turkey; and the Gerald Desmond replacement bridge at the Port of Long Beach, California.