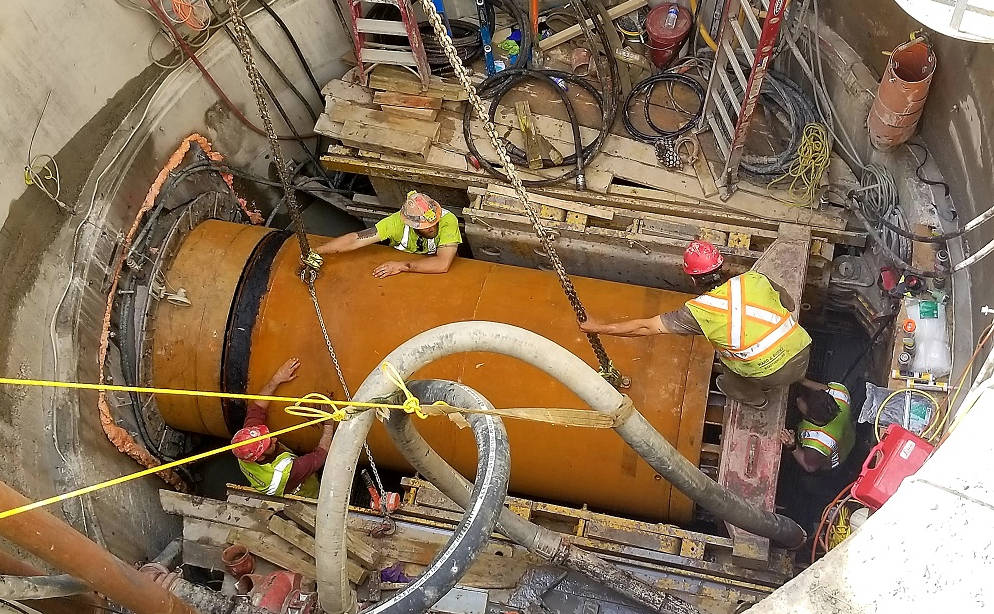 The first microtunnel drive has been successfully completed for the City of New Albany, Ohio’s Blacklick Creek Trunk Sewer (BCTS), Aldea Services Inc. reported. Part 1, a 48-in. (1,200 mm) inside diameter RCP curved (vertical and horizontal) microtunnel that will be 3,154 ft (961 m) long when completed.  The purpose of this extension is to provide sanitary sewer service to the areas of Jefferson Township, Plain Township, and the City of New Albany.

The project consists of two curved microtunnel drives with lengths of 1,653 ft (504 m) and 1,501 feet (458 m) respectively, one launch shaft, and two receiving pits. The drives are located from 20 ft to 38 ft below ground surface are being excavated using a Herrenknecht (AVN 1200) slurry microtunnel boring machine (MTBM) on a grade of 0.30%. The geology of the tunnel is predominantly in rock (Cuyahoga Shale) with 5% to 10% of the drive length being in a fine-grained till and coarse-grained till material (glacial soils), below the water table.

Like any complex underground construction project, Blacklick Creek requires close coordination to minimize impact to the surrounding community. “Additional project constraints and key stakeholder concerns include protection of groundwater and private wells, a creek crossing, a county road crossing, tie-in to a downstream newly-constructed sewer tunnel, and disruption to local traffic and residents,” explained Guadalupe Monge, PE, of Aldea Services, which is serving as the Construction Management Team and trenchless design engineers.

Construction began on Feb. 4, 2019, with preparation of work areas, construction of jacking and receiving pits (reinforced concrete caisson shaft method), and installation of settlement monitoring points. Microtunneling construction of the first drive (MH-3 to MH-5) began on March 21, 2019, and was completed successfully on May 1, 2019. The total drive length from pit wall to pit wall was 1,653 ft and the average jacking force experienced was 148 tons (including the head), two inter-jacking stations (IJS) were installed but were not used.

“Our average skin friction of 0.080 psi (including the vertical curve) demonstrates that when the jacking pipe has a joint capable of withstanding 55 psi (min) external pressure, adequate lubrication can then be distributed to the annulus at an adequate pressure to control the skin friction being applied to the pipe, allowing lower tonnage and greater tunnel distances be achieved,” explained Colin Irwin of Ward & Burke, which is serving as the trenchless contractor. The average advance rate was approximately 50 ft/day (excluding Sundays and holidays), working two 12-hour shifts per day.

Construction of the final drive (1,501 ft total length) began on May 14, 2019 and will incorporate compound curves with 820 ft (250 m) and 1,640 ft (500 m) radii, and a 400-ft straight section. The contractor plans to use a relatively new Herrenknecht technology called an “Anti-roll can” which will prevent rolling of the MTBM and increase production.