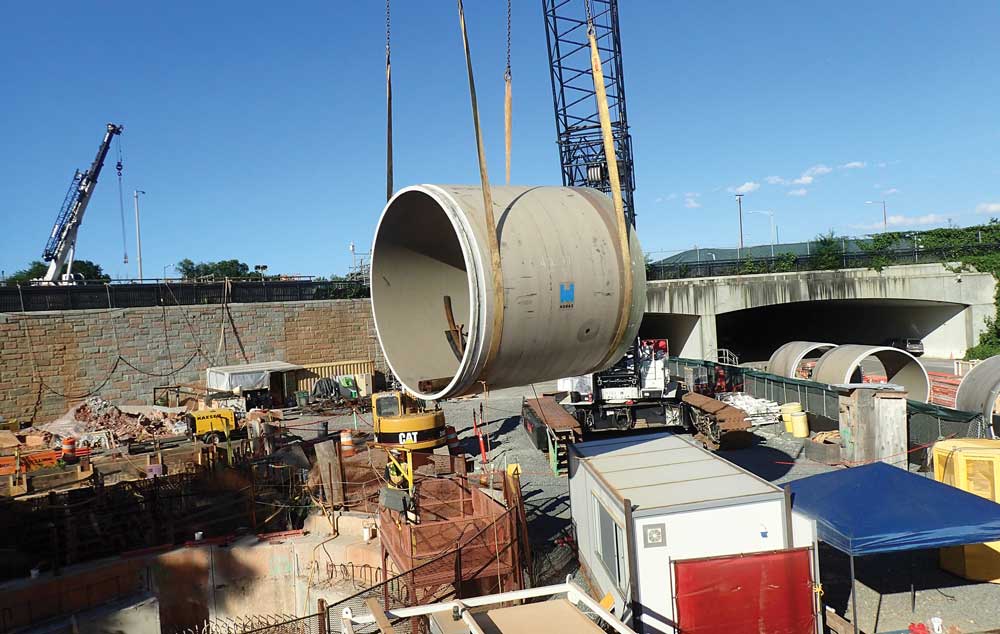 Hobas supplied 120-inch, 1765-ton jacking pipe for this project although 600 tons of jacking force was all that was needed to complete the drives.

Although the rivers and creeks that meander through Washington, D.C., are often noted for their historical significance, a deeper story – fueled by inevitable progress – presents a challenge that even our forefathers could not have predicted.

For more than a century, only sewer systems with separate pipes for sewage and storm water have been installed in our nation’s capital. Prior to this however combined sewage and storm water pipelines were installed. In fact, about one-third of the District of Columbia has a combined sewer system, a distinction not unique in numerous other older cities. As these pipes aged and the population grew, combined sewer overflows (or CSOs) frequently occurred during intense rainfall when the combination of storm water and sewage exceeded the capacity of the sewer pipes. The result was an overflow to the closest body of water.

Because CSOs harbor bacteria and trash that can be hazardous for both people and nature, the District of Columbia Water and Sewer Authority (DC Water) is actively implementing its Long Term Control Plan (LTCP). The plan’s goal is to meet requirements established by the U.S. Environmental Protection Agency for pollution control and reduction of CSOs into nearby waterways. This exciting new chapter – a viable solution for present and future generations – will ensure protection of the environment today and for years to come. 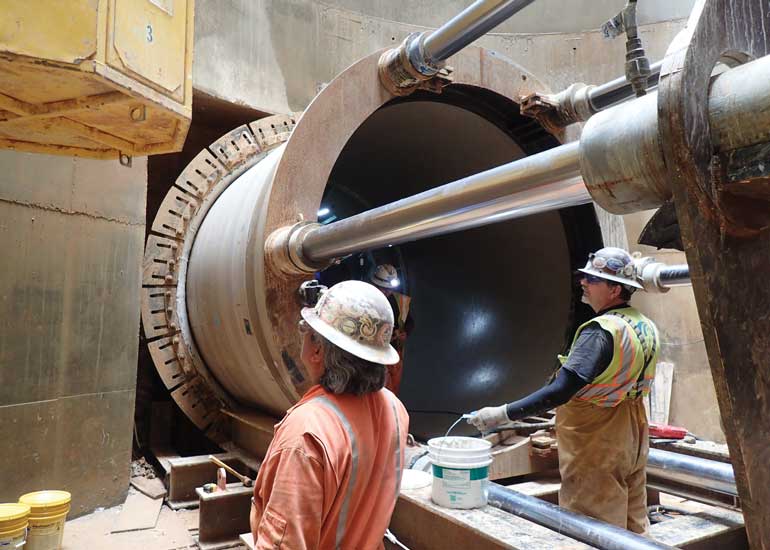 The LTCP, deemed a far more desirable alternative to the combined sewage back-up in homes, businesses and roadways, is well under way. The first segment, DC Clean Rivers Project Division H – Anacostia River Tunnel, is one of several contracts in the overall plan of deep tunnels, sewers and diversion facilities, designed to capture overflows to Rock Creek as well as the Anacostia and Potomac rivers for treatment at the Blue Plains Advanced Wastewater Treatment Plant.

Construction of the Division H – Anacostia River Tunnel was launched in 2013 with the construction of six reinforced concrete slurry diaphragm wall shafts along the tunnel alignment. The walls provided initial support during shaft excavation and also formed part of the permanent structure.

Next, microtunneling, a trenchless pipe installation performed by remote-controlled jacking, was used to insert the jacking pipes more than 100 ft below the ground under the CSX Railroad tracks and right of way to connect the CSO-018 outfall to the tunnel system. According to Hobas Pipe USA Commercial Manager Rob Epstein, the company supplied 320 ft of 120-in., 1,765-ton jacking pipe for this project. Manufactured by Hobas Pipe USA in Houston, Texas, Hobas CC-GRP jacking pipes are known for their smooth, non-absorbent exterior surface, tight outside diameter tolerances, high compressive strength and lightweight construction.

DC Water Resident Engineer Scott Shylanski said Hobas pipe was chosen for its availability and hydraulic considerations. “The machine selected by the contractor could not accommodate the specified diameter for RCP pipe,” he noted. “Hobas was selected as it met the required head requirements and as the Hobas internal diameter was slighter smaller than originally specified, the hydraulic specifications of the Hobas pipe offset the reduced volume.”

Shylanski said the Hobas pipe was jacked from DC Water’s CSO-018 shaft and was designed as the CSO-018 adit, approximately 300 lf and 90 ft deep, to the Anacostia River Tunnel. “The ends of the line – both at the shaft and tunnel connection – terminate near the structures and were embedded in a reinforced concrete collar,” he added.

Special lead and lag pipes to be utilized with the intermediate jacking station were supplied. The use of an intermediate jacking station allowed SECA Underground Corp. to isolate different parts of the pipe stream to overcome friction, said owner Steve Leius, whose company was subcontracted by main contractor Impreglio Healy Parsons JV to perform the microtunneling operation.

“The maximum tonnage applied at any time during the run was approximately 600 tons,” Leius said. “However, most of that – up to 400 tons plus – was required over time to overcome the face pressure because of the hydrostatic loads and the slurry pressure. It’s very interesting that at the end of the drive, the machine basically holed through using approximately 50 tons generated by skin friction.”

Leius described the process in greater detail: “Obviously, when you’re jacking pipe, there’s a reaction between a pipe and the earth. You try to isolate that with overcut and whatever suspension in that area to limit that reaction. We used a polymer because of the propensity for the clay to swell with water. Because of its smooth surface and the way the pipe is spun cast, basically we didn’t have any rough areas which tends to keep the friction way down. Overall cost and outside diameter control are very beneficial to jacking operations.” 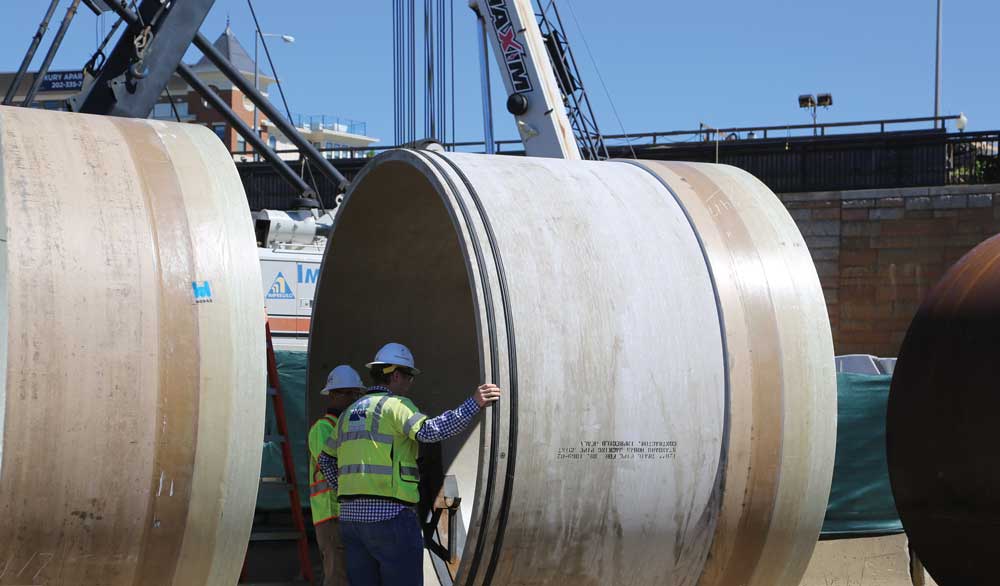 The use of an intermediate jacking station allowed Seca Underground Corporation to isolate different parts of the jacking run to overcome friction.

Due to the efficient nature of the pipe installation, open trenches were not required and traffic disruption was kept to a minimum. Additionally, special storage areas were not needed for materials and equipment.

Upon completion of the jacking run, infiltration testing was performed to check for leaks. In addition to the visual leakage survey that was conducted pipe deflection was measured as well. Although one joint had minor leakage, the problem was solved by following a plan already in place to laminate that joint.

About two weeks after its opening, the tunnel passed its first real-life test with flying colors when the District of Columbia sustained a pounding rainfall of 2 in. within three hours. The tunnel stored and treated millions of gallons of combined sewage that would have previously flowed to the river.

Mining for the next portion of the Anacostia River Tunnel System, the Northeast Boundary Tunnel, will soon begin. The tunnel will add approximately 90 million gallons of storage when it opens in 2023.

Once the Anacostia River Tunnel System is completed, overflows may still happen in rare, extreme rainstorms, but the tunnels will capture 98 percent of the CSOs in an average year.

According to DC Water, the project will lower the chance of flooding in the areas it serves from approximately 50 to 7 percent, an amount equivalent to a 15-year storm in any given year. The amount of nitrogen discharged to Chesapeake Bay will also decrease by approximately 1 million pounds per year.

Bloomingdale and LeDroit Park residents, who have been served by an undersized sewer for decades, will reap the benefits as well since the finished tunnel system is expected to provide greater flood relief to their neighborhoods.