You are at:Home»News»International News»First TBM Breaks Through on Thames Tideway Project 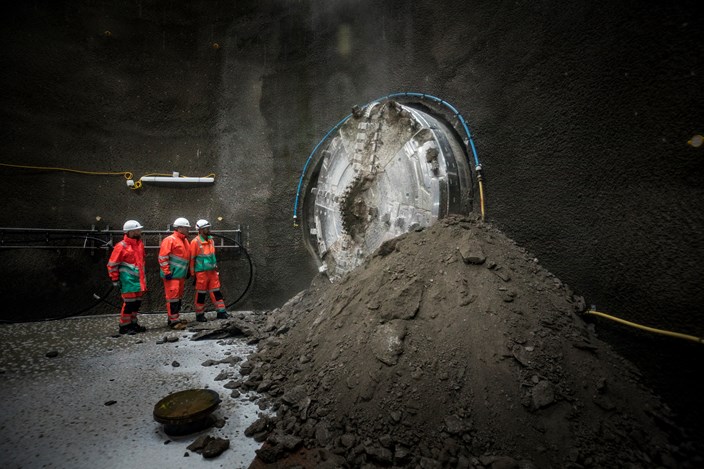 A giant tunneling machine has become the first to break through the ground to complete a section of tunnel for London’s new super sewer.

The tunnel boring machine (TBM), named after suffragist Charlotte Despard, is digging the Frogmore Connection Tunnel from Wandsworth to Fulham as part of the Thames Tideway Tunnel project to clean up the River Thames from sewage pollution.

The 1.1-km tunnel will take sewage overflows from King George’s Park into the main 25-km super sewer at Fulham, where it will be transferred to east London for treatment instead of polluting the River Thames.

The 500-m southern section of the Frogmore Connection Tunnel, from Dormay Street to King George’s Park, is now complete. Charlotte will now be lifted from the shaft, taken back to Dormay Street and placed back into the ground to tunnel 600 m north to Fulham.

Sally Cox, Project Director for the west section of the project, said: “This breakthrough, the first on the Tideway project, marks another key step toward a cleaner, healthier River Thames. Despite being the smallest TBM on the Tideway project, Charlotte is creating vital infrastructure that will benefit Londoners and their river for many years to come. Our tunneling team has done a fantastic job getting this machine to King George’s Park and will now focus on completing the northern section of the Frogmore Connection Tunnel.”

Charlotte is a 3-m wide machine and more than 70 m long, while the Frogmore Connection Tunnel is being created at a depth of around 30 m.

The TBM has been refurbished and previously worked on a water ring-main project in north London.

The first section of the main tunnel is also close to completion, as tunneling machine Millicent approaches Fulham after tunneling almost 5 km from Battersea. So far, 8 km of the Thames Tideway Tunnel has been built, with four tunneling machines in the ground. Once complete in 2024, the tunnel will help stop tens of millions of tons of raw sewage pouring into the river every year.