You are at:Home»News»Fox Conference Returns to Record Turnout 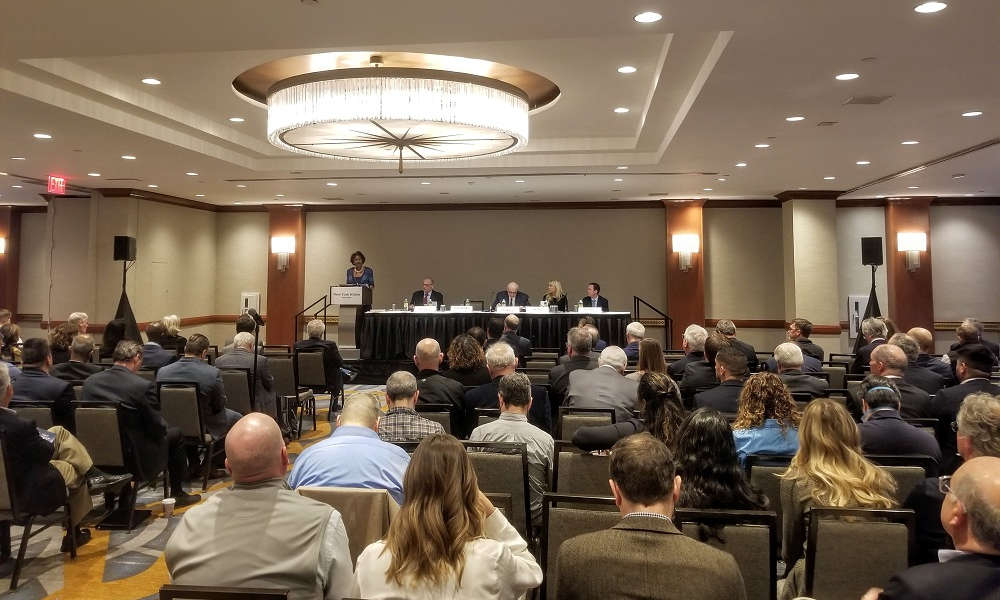 Nuria Fernandez delivers the keynote address at the 2022 George A, Fox Conference.

The 20th George A. Fox Conference returned to an in-person event for the first time since 2020 with a record turnout of more than 380 in attendance. The event, rescheduled from its customary January timeslot due to the pandemic, was held May 10 at the New York Hilton Midtown.

In recognition of the 20th event, conference organizers presented a special session on the history of the Fox Conference, prepared by Tom Peyton, and a tribute to George Fox himself. Fox, president of Grow Tunneling, had a 50-year career in tunneling in the New York City area, playing key roles in the construction of 70 major public works projects valued at $61 billion. David Goodman of Grow Tunneling provided a video remembrance of Fox, who described him as a humanist who understood the value of people, both employees and stakeholders, in addition to the technical aspects of tunneling. Fox was the keynote speaker at the inaugural event held in 2000 and passed away in 2001.

The keynote presentation was given by Nuria Fernandez, administrator of the Federal Transit Administration, who discussed key aspects of the recently passed Infrastructure Investment and Jobs Act. Other highlights included a panel discussion on workforce sustainability as well as presentations on current and upcoming projects, and key issues facing the industry.

The location at the Hilton Midtown marked a departure from year’s past. The first event, started as an AUA Regional Conference in 2000 at the McGraw Hill Building, was re-branded as the George Fox Conference in 2002 where it was held at the City University of New York Graduate Center until 2020 (2021 was a virtual event).

The event is hosted by the UCA of SME. Bob Palermo, Senior Vice President with GZA, served as the chair of the 18-member program committee.