You are at:Home»News»Herrenknecht Opens Service Branch in Abu Dhabi

“The Arab market provides for enormous future potentials – this is the reason why we have now established a full-service branch for micromachines in Abu Dhabi,” said Ulrich Schaffhauser, head of management of the Business Unit Utility Tunneling. The branch is run by general manager Swen Weiner who has been representing the utility tunnelling business (Ø ≤ 4.20 m) of the Herrenknecht Group in the Middle East for eight years.

Since the 1990s, Herrenknecht AG has delivered more than 200 micromachines to the Gulf region. With the new location, Herrenknecht is aiming to further develop its business relationships there. 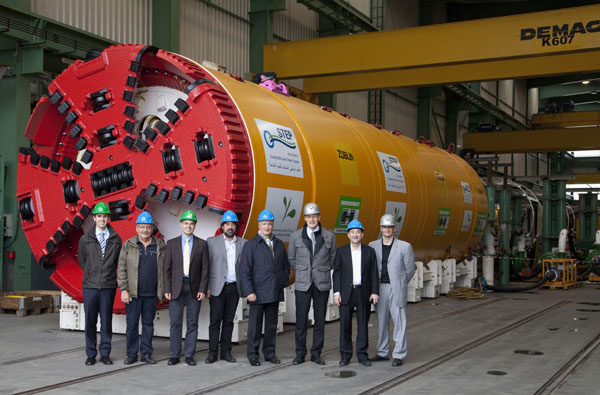 Herrenknecht, which has supplied machines for projects like STEP, is expanding its presence in the Persian Gulf region with the opening of a service branch in Abu Dhabi.

“Tunnel construction in the Gulf region is facing dynamic times and we want to offer our customers top services,” Schaffhauser said. Against this backdrop, Herrenknecht Tunnelling Systems LLC will mainly focus on overhaul micromachines in the Abu Dhabi workshops. In addition, Herrenknecht experts will provide for spare parts supply and service on the jobsites. The utility tunneling business unit at Herrenknecht offers machines for tunnel, shaft and pipeline construction in the areas of water, sewage, electricity, oil and gas. In addition, the Herrenknecht Group founded the company Commodore Cement Industries LLC (CCI) together with Commodore Contracting Company of Abu Dhabi. This means that Herrenknecht holds a participation in a concrete component factory specialized in lining segments and pipe segments for tunnel projects, which was built in Abu Dhabi’s Al-Mafraq industrial zone in 2010.

Comprehensive infrastructural works are planned and being realized in Abu Dhabi to support the growth of the city’s population from 621,000 inhabitants in 2012, to over 3 million by the year 2030. At the heart of these measures is Abu Dhabi’s Strategic Tunnel Enhancement Program, or STEP for short. It is one of the most comprehensive infrastructure programs ever carried out in the Gulf region. Client of the STEP project is the Abu Dhabi Sewerage Services Company (ADSSC) that aims to restructure the city’s sewage network by building extensive tunnel networks. New supply networks, the Link Tunnels, will connect the existing sewage system with the new main collector, the so-called Deep Tunnel sewer. This tunnel runs from Abu Dhabi’s city center to a newly planned water treatment facility in the municipality of Al-Wathba, 42 km to the southeast of the city, closing the desert city’s sewage circuit and supplying up to 15m3/s of treated water for irrigation.