You are at:Home»News»Historic Pennsylvania Tunnel Reopens After 40 Years

A $2 million tunnel construction project on the Great Alleghany Passage (GAP) has allowed the Pinkerton Tunnel to reopen to the public. The project was made possible with the help of a geotechnical polyurethane foam called TerraThane, by U.S. company NCFI Polyurethanes. 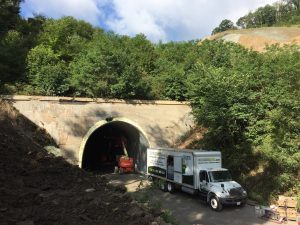 The GAP rail-trail is 150 miles of hiking and biking between Cumberland, Maryland, and Pittsburgh, Pennsylvania, created along the former railway line. In Cumberland, the GAP joins the C&O Canal Towpath, creating a continuous 335-mile long trail experience all the way to Washington, D.C.

It’s become a favorite biking destination for people from around the Mid-Atlantic states. One of its main tunnels, the Pinkerton Tunnel, an 849-ft former Western Maryland Railway tunnel, has been closed since 1975 due to erosion and unstable conditions. The Allegheny Trail Alliance, the organization that built and now maintains the 150-mile GAP, and the Somerset County Rails-to-Trails Association (SCRTA), wanted the tunnel reopened and helped fund the project.

“This was not your typical job,” says Kirk Roberts, manager of CJGeo, the Williamsburg, Virginia, company chosen to help bring the tunnel back to safe use. “First off, it’s 2 miles from the nearest road, and the weight limit on the trail and some bridges is only 20,000 pounds, so bringing in traditional cement grouting equipment wasn’t feasible.”

Roberts says GeoBuild of Columbus, Ohio, and Gannett Fleming, a Camp Hill, Pennsylvania-based global design-build-construction firm, began the tunnel work on April 3, 2015, after extensive road and bridge stabilization. “They essentially created a new tunnel within the existing tunnel using a structural steel plate tunnel lining system. We pumped our geotechnical polyurethane foam into the gap between the two tunnels to create a single monolithic structure.”

Roberts says the special TerraThane system was the ideal choice because it’s a viscous, high-density liquid that can be easily and cleanly pumped into any space, fills that space then expands to adhere to both the concrete and the steel. Once cured, the hardened foam becomes part of both structures, which are, for all practical purposes, now a single support structure.

“NCFI’s formulation is structurally sound and provides excellent waterproofing for the steel. We took two weeks pumping in more than 120,000 lbs of TerraThane, and to grout the annulus. This was by far the largest structural steel plate tunnel reline grouted with polyurethane the liner manufacturer has ever seen, and the TerraThane worked great. The Allegheny Trail Alliance is really happy with their new tunnel, and so are the bikers.”

According to Roberts his company chose NCFI’s geotech foam system because they trust the company with more than 50 years in the foam business. “We can go to them with any crazy problem or situation and they’ve either seen it before, or their engineers can quickly suggest the optimized foam formulation and application. Their experience really matters to us.”