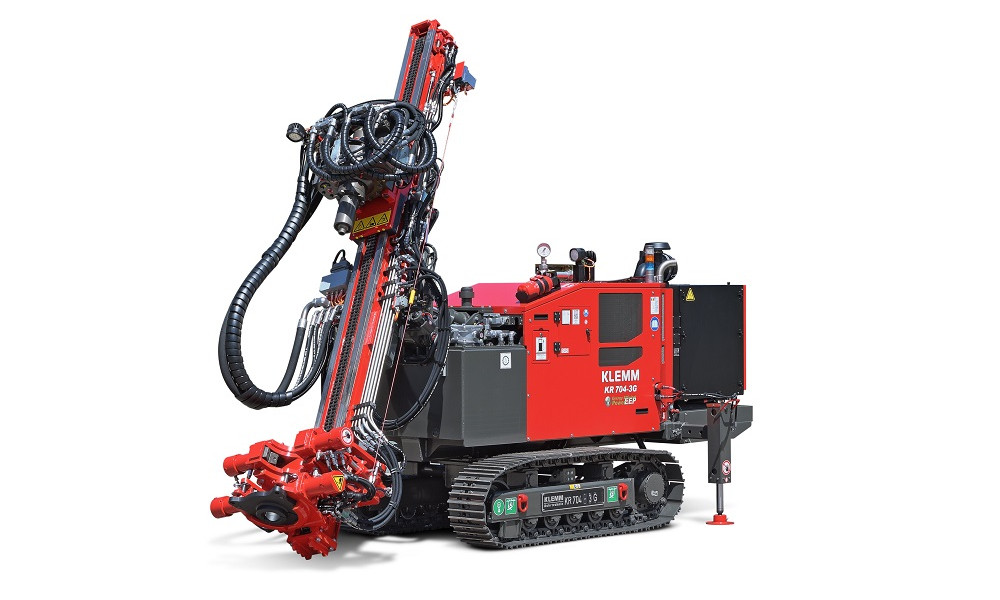 KLEMM Bohrtechnik has just started the market launch of the newly developed drilling rig KR 704-3G – the next generation within the proven and widely used KR 704 series.

Designed for challenging drilling operations in urban environments and also within existing buildings, the new model scores with high performance, compact dimensions and low weight. It is powered by a 55 kW diesel engine that meets the latest EU and US standards.

The option to use telescopic drill masts and the low base carrier width of 950 mm makes the KR 704-3G ideal for drilling operations in difficult surroundings with narrow doorways and low ceiling heights. The kinematics of the drill mast allow a lateral pivoting of the drilling axis (+/- 45°), which improves maneuverability and allows drilling points in building corners to be reached. Special civil engineering tasks, in particular micropiles for foundations and the underpinning of existing foundations with high-pressure injection columns, can thus be carried out under difficult conditions.

The hydraulic system of the rig is equipped with a load-sensing pump and a load-independent volume flow control. The system pressure for the drilling functions was increased to 350 bar. This concept also permits the operation of a hydraulic drifter.

All functions are radio remote controlled as standard, which offers numerous advantages for operating personnel when working in confined spaces. The system complies with EN 16228, whereby “Special Protective Mode” (SPM) is available for work without a separating protective device under special conditions and “Restricted Operation Mode” (ROM) is available for drill rod changes.

Like almost all KLEMM drilling rigs the KR 704-3G features the Energy-Efficiency-Package (EEP). Fuel consumption and noise emissions are considerably reduced. The functional safety of the machine controls complies with Performance Level C (ISO 13849), making it extremely resistant to faults and failures.

Depending on the customer requirements and the drilling task, the rig can optimally be equipped with different drill masts and a wide range of accessories.

In June, the first KR 704-3G is handed over to long-standing KLEMM customer GbE Grundbau Essen. Shortly thereafter it will be used for drilling and grouting operations on its first jobsite in Germany.