You are at:Home»Featured Stories»Portland CSO Basin: Building What Lies Beneath 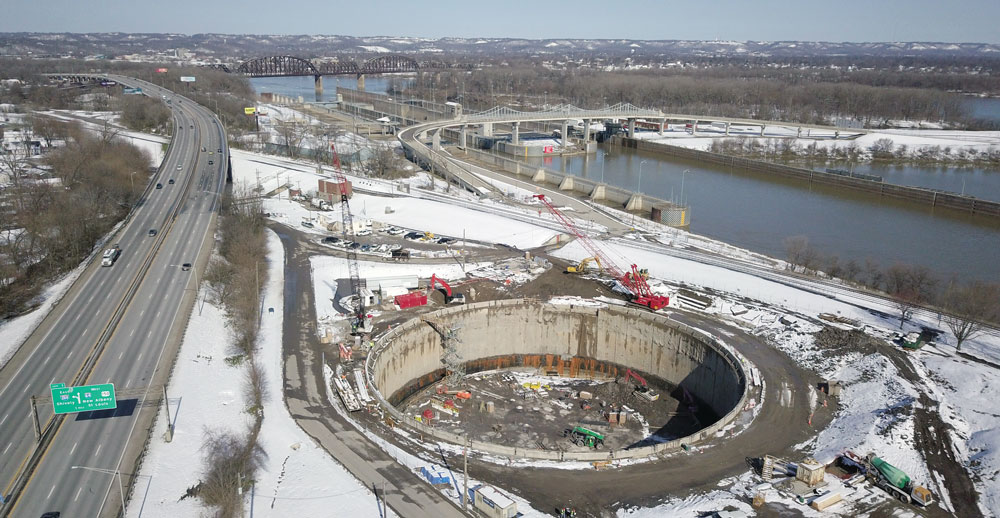 The Louisville Metro area, like many cities across the country, is experiencing the effects of an aging sewer system that is unable to handle the surrounding area’s current volume of sewage and storm water. Older combined sewer overflow systems (CSOs) are designed to handle storm water, domestic sewage and industrial wastewater. In heavy rain events, the volume of storm water exceeds the capacity of the treatment plant leading to overflows that pollute nearby streams and rivers and causing harmful water pollution and increased incidents of sewage backups.

The Portland CSO Basin is one of the many projects within Project WIN, and more specifically, within the Innovative Overflow Abatement Program (IOAP.)

The first part of the project, which must be in place by 2020, included the installation of multiple basins to retain a mixture of rainwater and sewage during heavy rain events that would gradually be released for treatment rather than overflowing the system and polluting waterways. 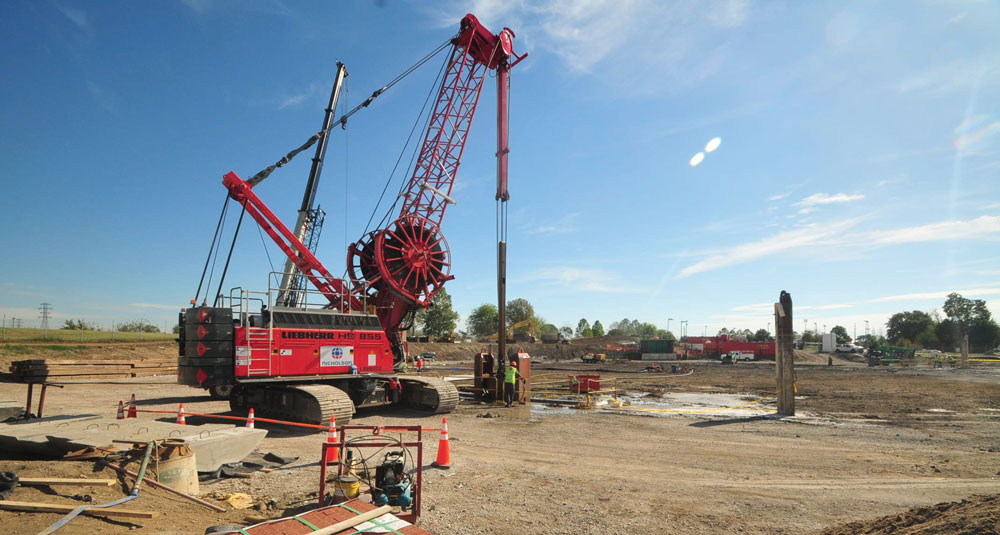 Construction in the Round

The Portland CSO project includes a circular storage basin that will provide 6.7 million gallons of combined sewage and storm water storage beneath historic Lannan Park in Louisville. The Portland CSO Basin has a drainage area of 850 acres with 61 overflows and 167 mgd per typical year. The new storage basin is expected to reduce the number of overflow occurrences by 86%.

Construction of the new storage basin required a circular excavation reaching 50 ft (15 m) in depth. Many different types of temporary support of excavation systems were considered, and ultimately a concrete diaphragm wall shaft was selected.

Nicholson Construction was contracted by general contractor Dugan & Meyers to install a 42-in. thick, 246-ft diameter, circular concrete diaphragm wall to act as a temporary support of excavation (SOE) shaft as part of the first phase of the WIN project.

Nicholson worked with Dugan and Meyers and the Owner’s Engineer to develop a Value Engineering (VE) alternate that effectively reduced the diameter of the shaft to 239-ft, and incorporated the diaphragm wall into the permanent structure, effectively utilizing the weight and strength of the diaphragm wall to simplify the planned construction of the permanent structure. The VE alternate also included the installation of tension micropiles to resist uplift loads on the permanent bottom slab of the basin. Acceptance of the VE proposal allowed the general contractor to offer the owner cost savings and a streamlined construction sequence.

A unique structure, the Portland CSO basin is one of the largest diameter diaphragm wall shafts constructed in the United States. The support of excavation is provided solely by the circular wall acting as a compression ring. Verticality of the panels is extremely important to maintain the integrity and water tightness of the structure.

Construction began in fall 2017 on the diaphragm wall and the process wasn’t without its challenges. The Lannan Park site was located on an old bottle landfill with a lot of trash and debris in the upper 16 ft of fill. The soils in this zone presented unforeseen challenges with significant slurry loss while excavating under a polymer slurry. These losses were unexpected because the onsite debris was reported to be predominately contained within a silt and clay matrix. Independent testing revealed some areas of little to no clay and a high presence of cinder in the fill soils. The classification of soil was determined to be different than that presented in the geotechnical information provided.

Chemical additives to the polymer slurry to increase viscosity and prevent loss were unsuccessful in controlling the volume and speed of the slurry loss. Fortunately, the slurry loss issue was solved by switching to a less viscous bentonite slurry for the remainder of the project. The bentonite slurry was successful presumably by sealing continuous voids through filter cake development.

Despite the three-week delay reconfiguring the slurry plant equipment for bentonite production, the diaphragm wall was completed on the original milestone schedule in November 2017, taking just five weeks to complete construction thanks to organization, logistics and planning. The project delivered a technically successful outcome and met schedule and cost goals for the owner and contractor.

Following the excavation of the shaft, Nicholson returned in March 2018 and installed 232 tension micropiles through the bottom slab. The tension piles precluded the need to excavate approximately 12,500 cubic yards of bedrock that was going to be replaced by concrete, thereby saving schedule and money. The overall project is scheduled for completion in 2024.