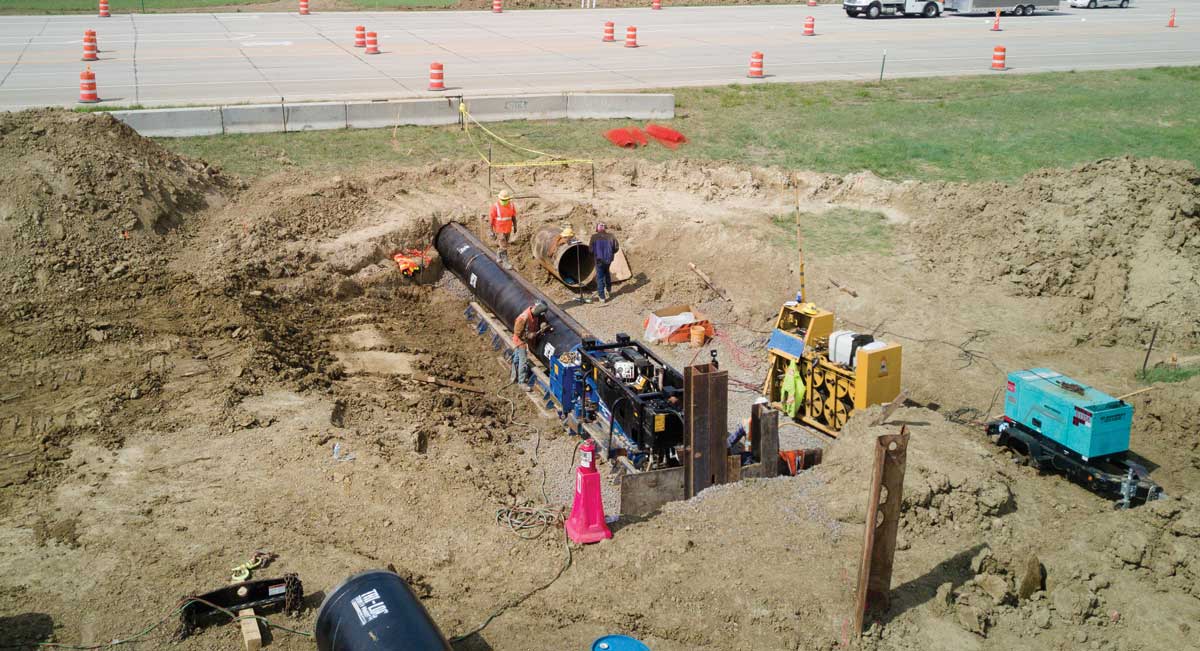 When completing a recent auger boring project in Berthoud, Colorado, the team from BTrenchless was presented with a unique opportunity. The project involved two identical bores under US 287, a major six-lane highway in Berthoud, about 50 miles north of Denver, allowing BTrenchless to compare the efficiency of new spiral-welded steel jacking pipe with a push-together joint from Tri-Loc vs. standard, tried-and-true welded steel pipe.

The bores in the project were the same diameter (42 in.) and length (200 ft), located side-by-side less than 10 ft apart, traversing the same ground conditions and with the same amount of cover. So, BTrenchless a division of BT Construction based in Henderson, Colorado, decided to take advantage of the situation and tackle each bore using the different pipe products. 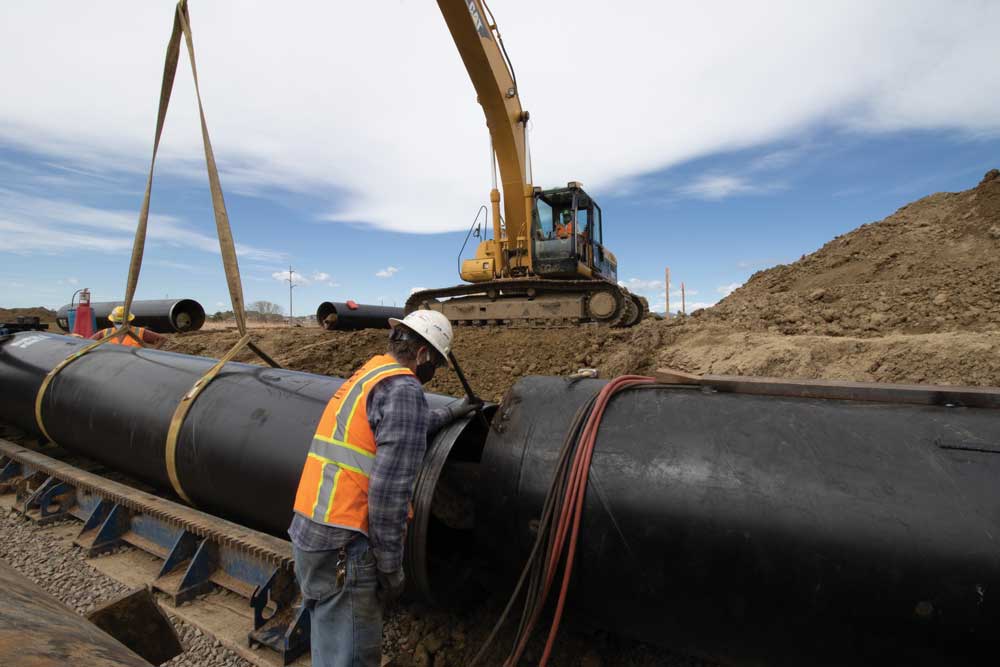 “The main thing we wanted to see was if the Tri-Loc pipe with locking joint could be used efficiently vs. welding the pipe,” said Matt Wojtkiewicz, BTrenchless’ Project Manager. “Specifically, does the cost of the Tri-Loc pipe offset the welding cost of standard pipe? Since we had two tunnels of the exact same length within 10 ft of each other, it was a perfect place to test it.”

This project for the Colorado Department of Transportation involved twin auger bores under US 287 to provide stormwater drainage infrastructure for a new housing subdivision being constructed. The project was completed in April and May 2020, and despite one snowstorm that impacted that area, the project went off without a hitch. 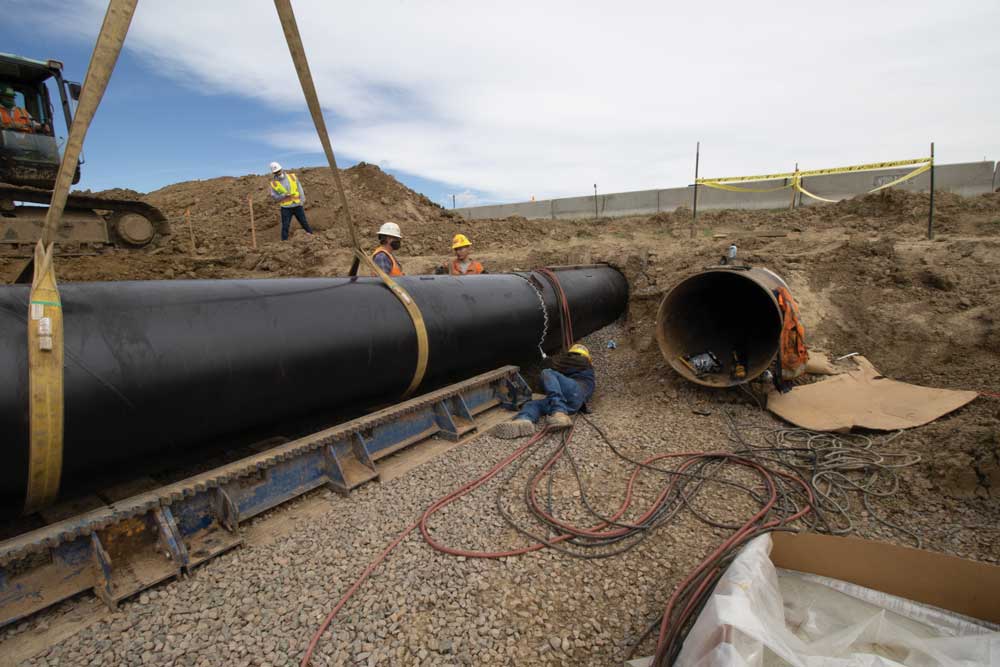 Crews used a McLaughlin auger boring system with an On-Target steering system to complete both bores through ground that included fill and claystone bedrock, and Pierre shale. The first bore was completed using 20-ft steel pipe segments with welded joints. Following the successful completion of that bore, crews repositioned the equipment in the pit and began the second bore using the Tri-Loc spirally welded pipe from Trinity Products.

Trinity Products manufactures the pipe in its St. Charles, Missouri, facility. The pipe incorporates a machined joint fitting that eliminates the need for field-applied butt welds. The joints are flush on the inside and outside and leak-proof under considerable ground pressure. The pipes are available 24 to 120 in. OD with a wall thickness from 0.375 to 1.5 in.

Tri-Loc pipes can be used in a variety of trenchless installation applications including microtunneling, pipe jacking, auger boring and pipe ramming.

As mentioned, BTrenchless was hoping to gauge the cost-effectiveness of the spiral welded pipe in combination with the press fit connection joints, but it was also eager to see the performance of the spiral-welded pipe itself. Spiral-welded pipe from the past had developed a reputation of twisting as it was advanced into the ground, an issue Trinity has addressed by reducing the protrusions of the weld seams on the outside of the pipe.

“The old school of thought was that spiral-welded pipe would start twisting as it goes through the ground, almost like a screw, because of the welds on the outside of the pipe,” said Don Meyer, BTrenchless’ Superintendent. “We had a little bit of rotation when installing the pipe, but it was nothing out of the ordinary. The Tri-Loc pipe still has seams on the outside of the pipe, but they are not like the big welds that you would see 25 years ago.” 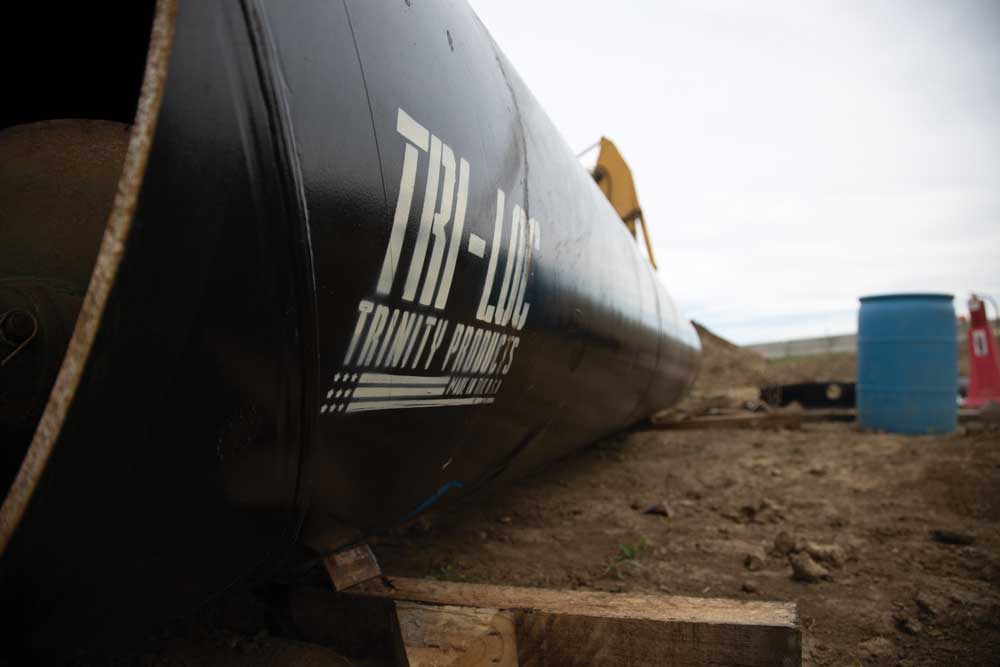 As the project advanced, the benefits of using press fit joints like Tri-Loc vs. full butt welds were apparent. Crews averaged 40 ft per day using welded pipe, and were able to double production using the Tri-Loc pipe.

The primary reason for the increase in productivity is the time it takes to complete the welding process vs. dropping in a new section of pipe and advancing it until the joints snap together. On average, it would take crews about 2 hours to prep and weld the conventional pipe segments, vs. 23 minutes to prep the Tri-Loc pipe.

“As production goes up, it is a cost savings to us,” said Chris Knott, lead Trenchless Estimator for BTrenchless. “Having a crew waiting for 23 minutes vs. 2 hours makes a big difference.”

“We’re trying to make it easier on our customers by making a pipe that eliminates welding and reduces time in the field, allowing them to get the job done quicker and move on to the next one,” said Tony Baker, Sales/Project Manager for Trinity Products.

“Overall, it was a good project and the pipe itself was great,” Wojtkiewicz said. “In choosing between the standard welded pipes and pipes like Tri-Loc, the larger the diameter and the longer the run, the more sense it makes to go with a pipe like Tri-Loc.

“Going in, we had a concern about the pipe rotating and getting off line due to the spiral weld, but that wasn’t an issue in our case, especially since we were in sandy gravel and not in clay. Importantly, we were able to minimize downtime and keep our crews productive all day.”