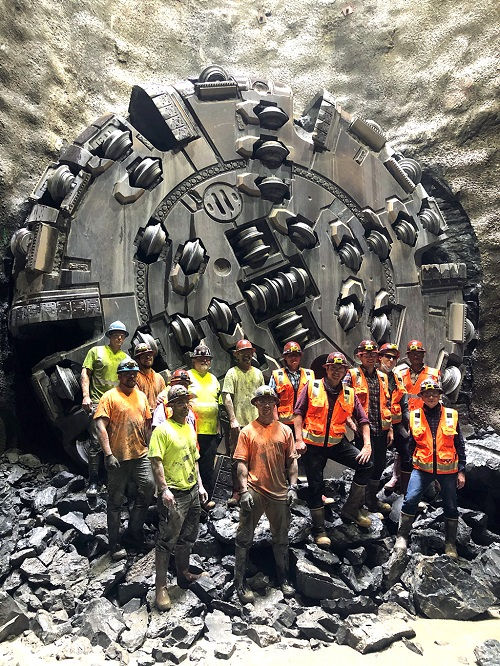 A 6.5-km (4-mile) long tunnel for wastewater storage below Louisville, Kentucky, has more to it than meets the eye. “At first glance, this seems like a straightforward project, but it turned out to be much more challenging,” said Shemek Oginski, Project Manager for the contractor, a joint venture of Shea/Traylor.

The 6.7-m (22-ft) diameter Robbins Main Beam TBM and conveyor system had to cope with overstress in the crown that resulted in significant rock fallout in seven different areas, as well as methane gas in the tunnel. By the machine’s breakthrough on Sept. 22, 2020, the crew had much to celebrate.

The machine was refurbished and consisted of older components as well as a brand new cutterhead supplied by Robbins and completely rebuilt electrical and hydraulic systems. “This was definitely an older machine—I actually operated it on the DART [Dallas Area Rapid Transit] tunnels in Dallas, Texas in the 1990s, but with many of the components being new we were confident in it,” said Oginski.

The original tunnel was expected to be 4 km (2.5 miles) long, but a change order added to the length by 2.1 km (1.3 miles). The extension was ordered by the owner, Louisville Metropolitan Sewer District (MSD), and its Engineer-of-Record Black & Veatch in order to eliminate four surface CSO storage basins. That included one basin originally located at the site of the TBM breakthrough, explains Oginski: “The original CSO site was located in close proximity to Beargrass Creek and had flooded multiple times. It was decided to extend the tunnel to that site in order to use the tunnel as storage instead, and connect it to the sewer system.” MSD installed a sheeting wall to protect the site from floodwaters while Shea-Traylor installed liner plate in the retrieval shaft, resulting in a site that is in much better shape.

It was in the 2.1-km (1.3-mile) extension, essentially a bifurcation of the main tunnel, where the crew encountered much of the crown overstress. “The longest section of overstress was 700 m (2,300 ft) and took two and a half months to get through,” said Oginski. The crew switched up the prescribed rock bolt pattern of four to six bolts at 1.5-m (5.0-ft) centers, and instead installed six bolts at 1-m (3-ft) centers. “It worked out to two rows per push. When that wasn’t enough, we installed wire mesh in the crown, mine straps, and channels. It definitely took extra time to install steel support, remove loose rock, and deal with the rock coming down so we could install rock support safely.” Overbreak varied from a few inches above the machine to 30 cm (1 ft) or more.

“We also had encountered natural methane gas in the tunnel just shortly before holing through,” said Oginski. The methane was discovered while the crew were probing out 150 ft ahead of the machine—something that the crew did continuously throughout the bore, using one, two or four probe holes depending on the geology. “We were down for about two weeks and were able to contain the methane within the cutterhead, where concentration spiked at 100% LEL. We were able to resume work after systematically ventilating, probing and grouting multiple times.”

Despite the challenges, the TBM was able to achieve up to 658 m (2,159 ft) in one month and 192 m (630 ft) in one week. The Robbins conveyor, including a 68.6-m (225-ft) long vertical belt, made this progress achievable, said Oginski: “The conveyor is definitely the way to go, especially for longer drives. There was quite a difference in performance between the extension tunnel, which we mined with lift-boxes, and mining with the conveyor. Our best month in the extension tunnel with the boxes was 221 m (725 ft), so that is a big difference.”

With tunneling now complete, Oginski is “definitely proud that we got to the end, as this is a challenging project.” The contractor is removing the components of the TBM to be stored in their yard in Mt. Pleasant, Pennsylvania, and sees future applications for the equipment. “If the right project comes up then yes, it’s likely we would use this machine again.”