You are at:Home»News»International News»Salini Impregilo Completes Work on Austrian Section of Brenner Base Tunnel 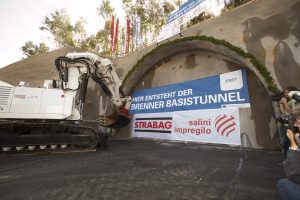 The Tulfes Portal during the inaugural celebration for the Tulfes-Pfons Lot on Sept. 18, 2014. (Courtesy of Salini Impregilo.)

Salini Impregilo and its joint-venture partner Strabag completed the final segment of a tunnel on the Tulfes-Pfons Lot of the Brenner Base Tunnel (BBT), which at 64 km will be the longest underground railway in the world connecting Munich and Verona, improving the transport of goods in Europe.

The lot is located near Innsbruck at the northern end of the BBT. It comprises 38 km of tunnels and tunnel systems, 15 km of which excavated by tunnel boring machine and the remaining 23 by the traditional drill-and-blast method. There is an exploratory tunnel, an emergency tunnel near the Innsbruck railway bypass and two connecting tunnels, among other works. 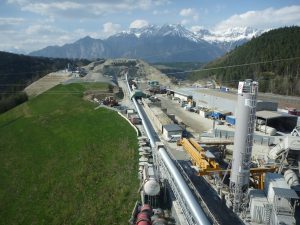 A final tunnel system that will run 15 km between the Ahrental junction and the municipality of Pfons is expected to be completed with a TBM by the spring of 2019.

In addition to the Tulfes-Pfons Lot, valued at accproximately $450 million US, Salini Impregilo is working on a river underpass on the southern segment of the BBT in Italy, a contract worth about $350 million.

The BBT is the main segment of a new railway line that will connect Scandinavia with the Mediterranean. It is designed to shift the transport of goods and people from the highway to the railway.