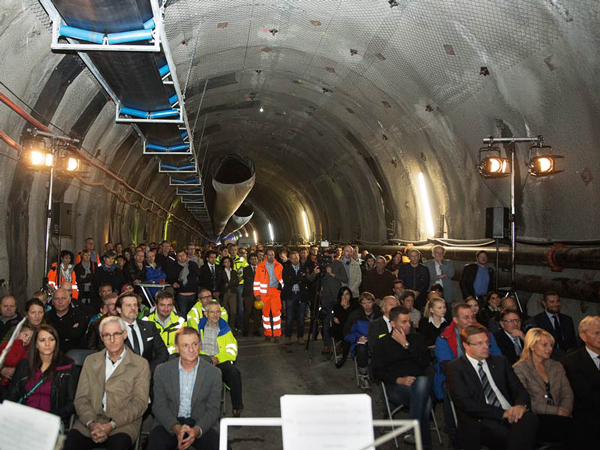 On Sept. 26, at the Tulfes Pfons lot at the Brenner Base Tunnel, in the presence of Günther Platter, President of the Tyrol Region, the ceremony for the start of the excavation works that will be carried out with a TBM took place. The TBM was assembled and prepared in the assembly and launch cavern situated at the end of the access window of Ahrental, in Innsbruck, Austria. This TBM has an 8 m diameter and will excavate 15 km of exploratory tunnel towards Italy in the next 38 months. The Salini Impregilo Group has won, together with the Austrian company Strabag, the two main lots that have been awarded as of today: the Tulfes Pfons lot situated in Austria and the lot that is situated in Italy that is named “Isarco River Underpass Section.”

The TBM that has started its work today is the first TBM to function in Austrian territory with regard to the excavation of the Brenner Base Tunnel. This work will be the longest underground railway connection in the world, with its 64 km tunnel. For its construction, innovative engineering solutions will be required. The Brenner Base Tunnel is a central element of the new railway line that will connect Munich to Verona, bringing an impressive improvement in the transport of goods from Italy to the heart of Europe.

The Tulfes Pfons lot in the Austrian territory and the lot situated on Italian soil for the Isarco River underpass are respectively worth approximately 380 and 300 million euro. Salini Impregilo with this important “across-the-border” project confirms its position as leader in the railway transport infrastructure sector even in Europe.