You are at:Home»News»Salini Impregilo Reaches Milestone on Northeast Boundary Tunnel 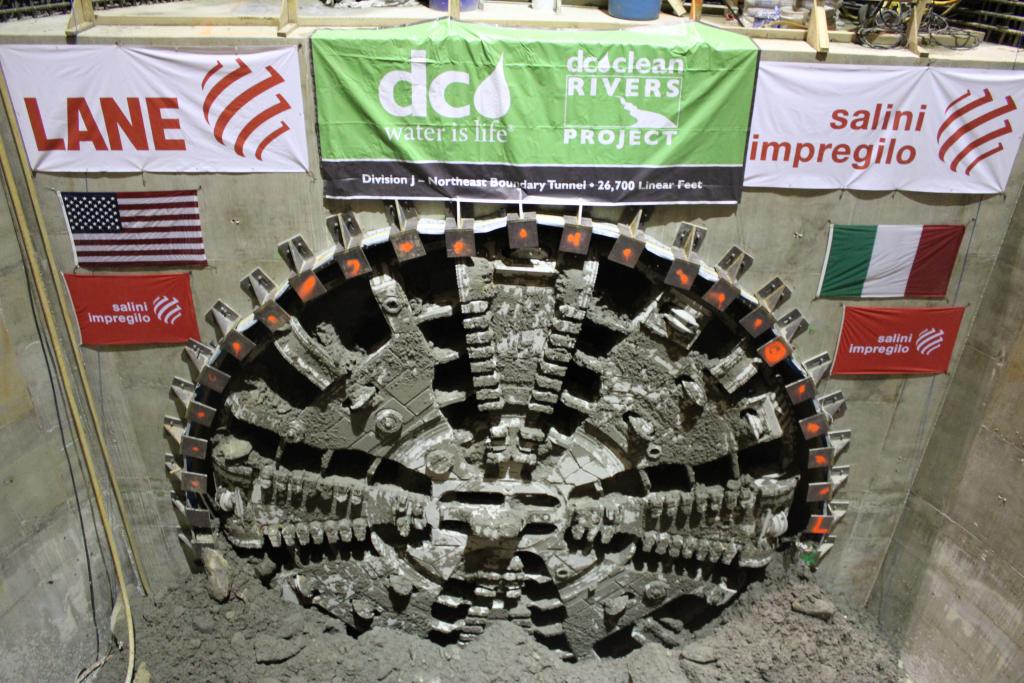 Salini Impregilo and its U.S. subsidiary Lane Construction have reached a milestone on the Northeast Boundary Tunnel (NEBT) environmental protection project in Washington, D.C., with a breakthrough by a tunnel-boring machine (TBM) nicknamed Chris, bringing to 60% the completion of the excavation work despite the coronavirus (COVID-19) emergency.

The Group has adopted extraordinary safety measures at its construction sites throughout the world in order to be able to keep them open. The sites include the one in Washington, D.C. and 46 others across the United States. In its home market of Italy, there is the new M4 metro line in Milan and the bridge under construction in Genoa. Nearly 50,000 direct and indirect workers are following the safety rules while a 500-strong task force is monitoring the situation at a global level.

The NEBT, a $580 million project part of the Clean Rivers Project of DC Water, is the tunnel that will improve the water quality of the Anacostia River by increasing the capacity of the existing sewer system to manage flooding during heavy rainstorms.

“To date, the portion of the Anacostia River Tunnel that is in service has prevented more than 7 billion gallons (about 26,5 billion litres) of combined sewage and 3,500 tons of trash from entering the Anacostia, bringing a resurgence to the waterfront. The Northeast Boundary Tunnel in particular will significantly reduce sewer backups and chronic flooding in the Bloomingdale and LeDroit Park and other neighborhoods adjacent to Rhode Island Ave, NE,” said David L. Gadis, CEO and General Manager of DC Water.

With the breakthrough, the TBM Chris has reached the W Street shaft, the only in-line shaft that it will cross during its 8.2-km journey underneath the U.S. capital. The tunnel, with a 7-m diameter, goes from the Robert F. Kennedy Stadium at the intersection between Rhode Island Avenue NW and 6th Street NW. It will be aligned to intersect the existing chronic flood areas along Rhode Island Avenue NW. In times of flooding, the tunnel will receive flows from the sewer system captured by diversion facilities and convey them to DC Water’s Blue Plains Advanced Wastewater Treatment Plant. Once connected to the Clean Rivers tunnel network, the NEBT will reduce by 98% the volume of untreated water that would otherwise flow into the Anacostia River.

The Anacostia River Tunnel project is the first component of the Clean Rivers Project, one of the biggest and complex projects constructed by the Lane-Salini Impregilo joint-venture team in the support of clients to develop projects to protect the environment.