You are at:Home»News»International News»Satellite Monitoring for the Grand Paris Express 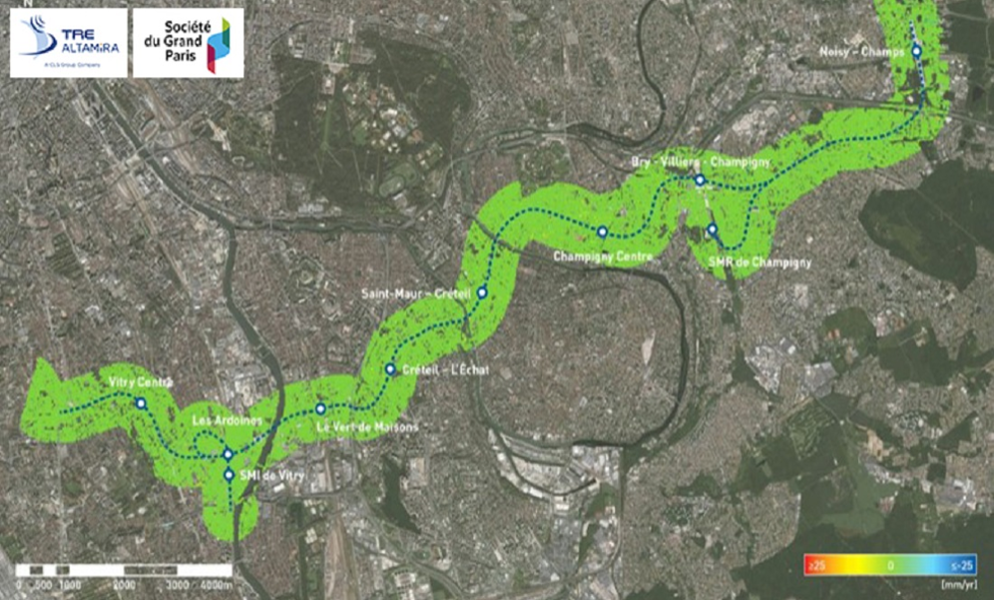 The Grand Paris Express is an unprecedented urban development project centred on a major expansion of the existing public transport network for the whole Paris metropolitan area. It consists of a fundamental rethink, redesign and focus on the public transport network on the scale of the metropolitan area. The purpose of this project is to provide Grand Paris with multimodal transport solutions, more integrated transport services, thus supporting a model of polycentric development. 68 new stations and 200 km of metro lines will be gradually put into service by 2030.

From the very early stages of the project the Société du Grand Paris (the public agency set up by the French
Government to deliver the vision of Grand Paris Express) gave priority to a close surveillance of the
construction works in order to minimize any potential impact. The progress of the project is driven by risk
management and neighborhood disturbance reduction; key aspects in the design and the construction
process.

Among the monitoring methods implemented, TRE ALTAMIRA, part of the CLS Group, was commissioned in
2015 by the Sociéte du Grand Paris to monitor from space to the nearest millimeter the impact of the
operations along its track and the adjacent areas. The satellite based solution implemented measures the
ground displacement by processing satellite radar images acquired over the same area in different points in time.

During the WTC 2018 recently held in Dubai TRE ALTAMIRA presented some of the work conducted so far
in cooperation with Setec, the leading French engineering player in Civil Engineering field. This French
company is participating as the designer and construction manager of the western section of Line 15, the
first line to be built. Specific surveys conducted for sensitive buildings were also discussed together with the
French company Gauss Monitoring.

In the first place, a retrospective study of the ground motion was conducted over the 200 km of the Grand
Paris Express network. Historical ground motion in the area was mapped and an extensive inventory of the
soil surface behavior from April 1992 to March 2015 was provided, offering complementary information for the identification of vulnerable constructions before the start of any work. This mapping was generated from the processing of archived images acquired since the early 1990s to 2010 by medium-resolution satellites from the European Space Agency, and by high resolution satellites from the Italian and German Space Agency for the more recent period 2011-2015.

The outputs of this satellite historical study are data that can be combined with historical maps and
conventional geotechnical surveys to detect ground movements due to the evolution of quarry conditions or possible slope instability. In zones where clays are found, as is the case for other Grand Paris Express project lines, it would allow for the detection of soil movements caused by the swelling of the clays.
The analysis focuses on the amplitude of the motion accumulated over time. For each measured point, it is
therefore possible to see at what period the displacements have been initiated, and whether these
displacements are stabilized or in progress. These observations are crossed with existing knowledge in order to understand or better apprehend the cause of the motion, and to qualify their potential impact on the line 15 project at the time of tunneling.

Monitoring activities will continue during the whole project to detect and measure any ground
displacements in the area with the ultimate aim of keeping the prime contractors fully informed of the
impact of drilling on the surface, so that they can adapt their work accordingly.

An overview of the project and the importance of the satellite monitoring can be seen on this video by the
Société du Grand Paris.