You are at:Home»News»SBCTA Planning Transit Solution for Ontario, Calif., Airport 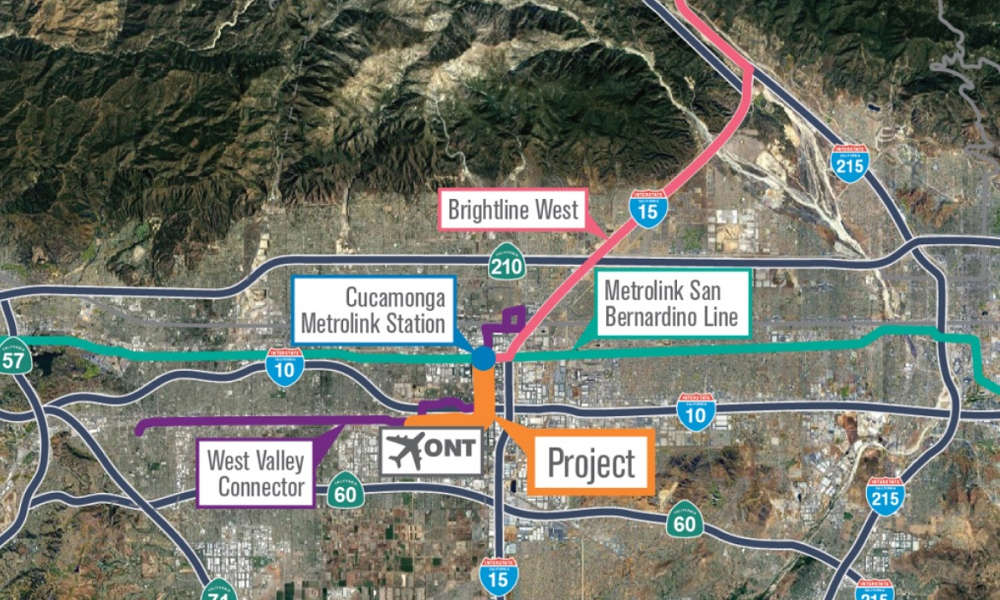 Ontario International Airport (ONT), located in the heart of the San Bernardino Valley, has been the fastest-growing commercial airport in the United States. Passenger volume is expected to grow by 15 to 30 million annual passengers by 2040.

The San Bernardino County Transportation Authority (SBCTA) has partnered with ONT to develop transit solutions for today’s and tomorrow’s passengers while ensuring the neighboring communities experience reduced congestion throughout the region.

This project, an innovative approach of tunneling, will create a subsurface transit connection between the Cucamonga Metrolink Station and ONT terminals. The Cucamonga Station is the closest to ONT on the San Bernardino Line and has consistently represented one of the higher number of boardings in the Metrolink system. The project sets the foundation for the privately funded Brightline West electrified high-speed rail connection between Las Vegas and Cucamonga Metrolink Station, as well as the zero-emission West Valley Connector bus rapid transit service coming in 2025.

Operated and maintained by Omnitrans, the project will feature a bi-directional system where passengers traveling to and from ONT will be transported in autonomous, zero-emission vehicles on an “on-demand” basis and developed under the Federal Transit Administration (FTA) Fixed Guideway requirements.

Most passengers departing from and arriving to ONT use I-10, which parallels the Metrolink San Bernardino Line from downtown Los Angeles to San Bernardino. I-10 is currently the most used segment of freeway in San Bernardino County, carrying some 270,000 vehicles per day.

Tunnel
The current reference design considers a 24-ft inner diameter single bore tunnel to accommodate a single travel lane in each direction. A center dividing wall would be constructed to separate the two travel lanes. Cross passage doors would be provided in the center wall at 800-ft spacing for emergency egress, per NFPA 130.

Vehicles
The proposed system will be operated using automated transit network (ATN) vehicles capable of providing on-demand dispatching of vehicles (individual and platooned) to carry passengers directly to their station without other station stops. These ATN vehicles will be fully ADA compliant, and feature level boarding and luggage accommodations for airport passengers.

Procurement
Following the RFQ period, SBCTA will shortlist at least two design-build teams for a 10-month preconstruction (Phase 1) period, leading to selection of a single design-build team to proceed to final design, construction, and O&M (Phase 2). The Phase 2 contract will also include a one-year (minimum) transitional operations period at the conclusion of construction and system start-up, testing, and commissioning.

A stipend for each shortlisted design-build team is included in the Phase 1 budget.

The two-stage model allows SBCTA and selected contractors to collaborate as an integrated team during the preconstruction phase. This collaborative approach promotes innovative ideas to benefit the project cost and schedule. Areas for potential project innovation include tunnel sizing, tunnel boring machine logistics and operations, and vehicle technology selection.

In January 2021, SBCTA selected HNTB for the project and construction management services contract, according to the HNTB website. HNTB will work with SBCTA to procure, select, and oversee a design, build, operate and maintain – known as DBOM – developer for the project.

In early 2021, SBCTA accepted a proposal by The Boring Company to build the connection. According to various recent reports – including this one by the Los Angeles Times – the company is no longer pursuing the project.