You are at:Home»News»International News»Schwanau Quartet Sets Swift Pace in Swabia 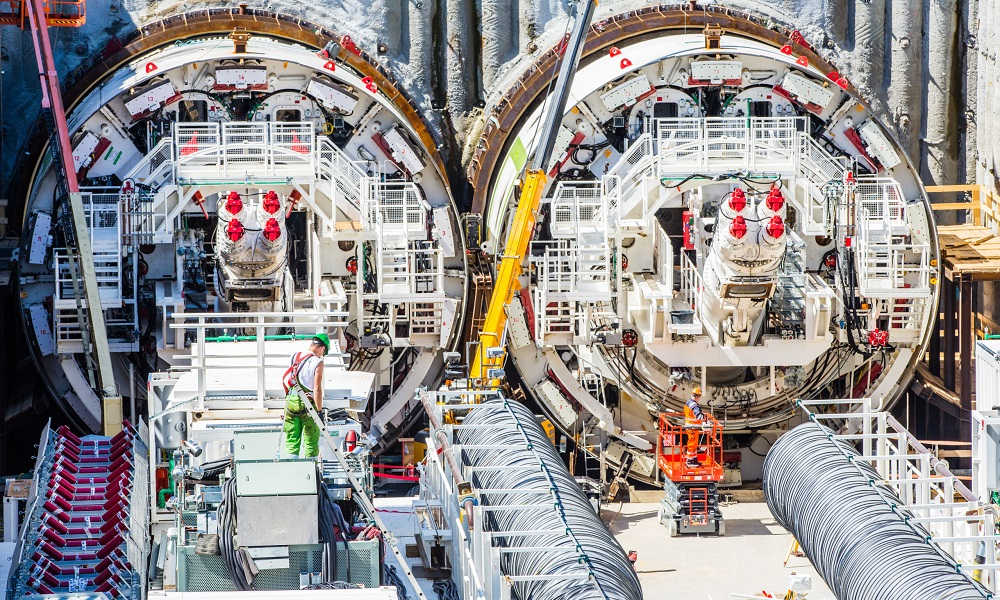 In five years, four innovative German tunnel boring machines from Schwanau in Baden have effortlessly and unerringly built almost 50 kilometers of new tunnels for the Stuttgart–Ulm rail project. Under the professional direction of the contractors, three major key structures of the epoch-making project were built in difficult Swabian ground conditions. The final act in this mission was completed at the Albvorland Tunnel in late October 2019 by the TBM called WANDA (EPB Shield, diameter 10,820mm).

All the machine-driven tunnels for the Stuttgart-Ulm rail project were quickly and quietly excavated in just five years of tunneling. The final act in the major project was a ceremonious breakthrough in the Albvorland Tunnel completed in late October 2019 by the tunnel boring machine (TBM) S-1024 (EPB Shield, diameter 10,820mm), which bore the name of WANDA (German acronym for “Wendlingen on the Neckar through the Alb foothills”).

This was the fourth and last successful project completion by the Herrenknecht tunnel boring quartet for the key structures Filder, Albvorland and Bossler tunnels. The machines bored a total of almost 50 kilometers of modern and efficient tunnel infrastructure with precision and speed. The TBMs mastered their underground mission under the guidance of the experienced tunneling experts and engineers of the three construction consortia and the overall direction of client Deutsche Bahn.

The Stuttgart–Ulm rail project is located on the European east-west main line from Paris to Bratislava and is divided into two major projects, Stuttgart 21, with the construction of the new main train station and the reorganization of the Stuttgart rail hub, as well as the new Wendlingen–Ulm line. With the construction of the main station as a through station and the connection to the European high-speed network, the travel times in regional and mainline services will be shortened significantly.

The twin-tube Filder Tunnel measures 9.5 kilometers, making it the longest tunnel structure between Stuttgart and Ulm. Herrenknecht supplied a high-tech “convertible Multi-Mode TBM” type (diameter 10,820mm) for the Filder Tunnel. In the fall of 2014, TBM SUSE (German acronym for “Stuttgart–Ulm reached faster”) began excavating the tunnel from the Filder Plain down towards the Stuttgart main station. During tunneling operations the jobsite used this launch portal to handle all of the logistics. This solution saved the city of Stuttgart thousands of truck journeys in the valley basin with dust and noise pollution.

In the upper section of the Filder Tunnel, SUSE worked in closed mode with screw conveyor muck removal, in the lower Filder Tunnel in open mode with belt conveyor discharge. With this convertibility of the TBM, designed and implemented by Herrenknecht engineers, the tunneling crews mastered the different geological formations along the tunnel alignment with maximum safety. For precise tunneling control, the miners of the contracting joint venture ARGE ATCOST 21 (Porr Bau GmbH Tunnelbau, G. Hinteregger & Söhne Baugesellschaft m.b.H., Östu-Stettin Hoch-und Tiefbau GmbH, Swietelsky Baugesellschaft m.b.H.) relied on a navigation system from the Herrenknecht Group Brands company VMT GmbH based in Bruchsal, Germany.

The large-scale project between Stuttgart city center and the Filder Plain was divided into four TBM tunneling sections: eastern and western tubes, each with Upper and Lower Filder Tunnel. Sophisticated overall logistical planning, a multitude of individual detailed solutions and trusting partnership between the project players laid the foundations for success. The Herrenknecht teams were involved early on in the planning phase and later during implementation – for example, when disassembling or converting a TBM. Herrenknecht’s expertise from a large number of pioneering large-scale projects over the past four decades has made a significant contribution to the rapid and safe progress of the project.

For example, when working on the first tunneling section in the eastern tube of the Upper Filder Tunnel: in order to be able to efficiently and safely carry out the TBM disassembly in the excavated tunnel, close cooperation between all project participants was required from the start. With a shield diameter of 10.82 meters and an inner diameter of the tunnel of only 9.6 meters, disassembly and transport back to the launch portal was only possible in the given time frame because all mechanical and logistical requirements were precisely planned in advance and then implemented on the construction site.

Richard Lutz, CEO of Deutsche Bahn AG, said on the occasion of SUSE’s final breakthrough in September 2019: “As a hinge between valley basin, airport and new line, the Filder Tunnel is an essential part of the project. I thank all the miners and engineers for their work on the tunnel. Construction and engineering skill have done extraordinary things here.”

Double pack at the Albvorland Tunnel

For the Albvorland Tunnel between Kirchheim unter Teck and Wendlingen am Neckar with two EPB shields, the Herrenknecht specialists, together with the contractor crew, met the first challenges even before the huge cutting wheel began to turn.

In order to keep to the schedule for the Albvorland Tunnel, Implenia Construction GmbH ordered two identical machines from Herrenknecht – one for each of the two tubes. The schedule for jobsite assembly stipulated that both machines should be assembled in the narrow launch shaft at the same time: with a diameter of 10.82 meters and only a few meters between the machines, this was an extremely tricky job. A crew of 20 specialized Herrenknecht experts assembled both TBMs at the tunnel’s eastern portal near Kirchheim unter Teck. In doing so they followed a detailed plan, according to which the assemblies were gradually pre-assembled in the site equipment area and lowered into the narrow launch shaft for final assembly.

With peak performances of up to 200 meters per week, from January 2018 to early August 2019 the Herrenknecht EPB Shield Sibylle (named after the legendary figure Sibylle von der Teck), excavated 7.6 kilometers of the northern tube of the Albvorland Tunnel. WANDA covered the 8 kilometers in the parallel southern tube between November 2017 and the breakthrough in October 2019 at up to 186 meters per week. 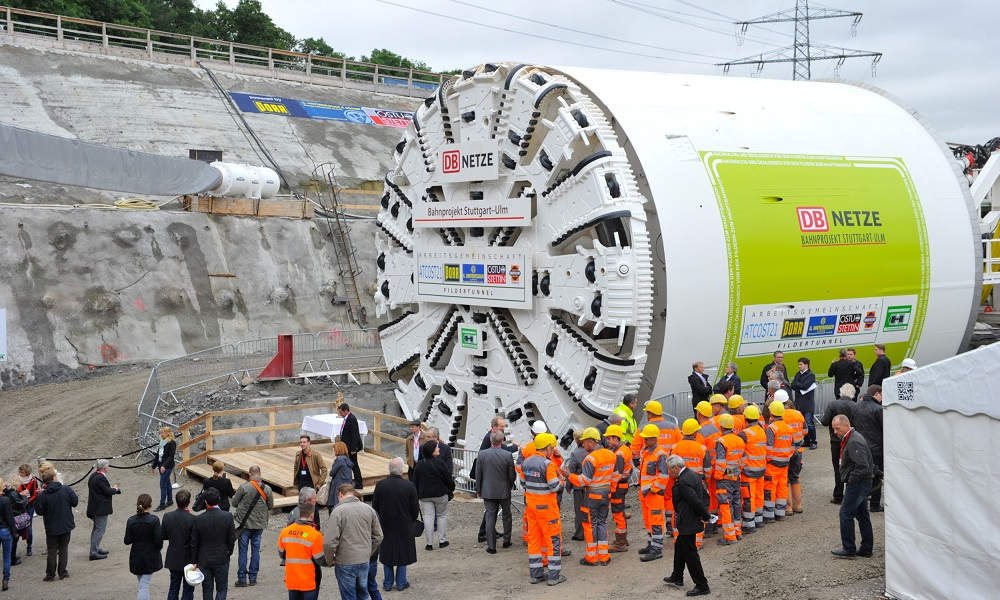 Faster than expected at the Bossler Tunnel

The 8.8 km long twin-tube Bossler Tunnel is the third tunnel structure on the new line between Stuttgart and Ulm for which Herrenknecht supplied mechanized tunnelling technology, alongside the Filder Tunnel and the Albvorland Tunnel.

At the launch portal near Aichelberg, the tunnel and TBM (“Käthchen”, Ø 11,340mm) were christened in November 2014. Shortly after tunnelling began in April 2015, the miners had the technology and logistics of the Herrenknecht EPB Shield well under control. They continuously raised the daily advance rates. After just two months, the 1,000 meter mark was passed.

The segments for the Bossler Tunnel, i.e. the precast concrete parts for the tunnel lining, were produced in molds from Herrenknecht Formwork GmbH in a specially built factory near the Aichelberg tunnel portal. A total of 60,000 segments were installed in the Bossler Tunnel.

Tunneling progressed so quickly and safely that the decision was made to use the TBM to excavate further sections of the tunnel that were originally to be built conventionally. In early November 2016 already, after 8.8 kilometers the proud miners of the contracting joint venture ARGE ATA Tunnel Albaufstieg (Porr Deutschland GmbH, G. Hinteregger & Söhne Baugesellschaft mbH, Östu-Stettin Hoch- und Tiefbau GmbH, Swietelsky Baugesellschaft mbH) celebrated their breakthrough in the first, eastern tube. In mid-April 2017, Käthchen took on the second, western tube, which she had already successfully driven by early June 2018 after best performances of up to 214 meters of tunnel construction per week.

Expectations for the mechanized drives between Stuttgart and Ulm were high on all sides. Maximum safety standards and ambitious construction schedules set the bar extremely high for the success of the project. In addition to the technology of the tunnel boring machines and the additional equipment, the Schwanau service commitment made the difference on the jobsite. Oliver Boiger, Head of Field Service at Herrenknecht, mentions one of the highlights: turning the Filder Tunnel TBM by 180 degrees from the western into the eastern tube in August 2018: “At the request of the joint venture, we created the concept for this special project, right down to the last detail in fact. We brought all the necessary equipment to the jobsite and ultimately carried out the complete turn.”

In late July 2018, coming from the Filder Plain in the western tube, shortly before the new underground Stuttgart main station TBM SUSE had reached an underground cavern. Here the 120 meter long TBM had to be turned 180 degrees for the subsequent excavation of the eastern tube of the lower Filder Tunnel. Oliver Boiger’s team first placed the 1,400 tonne shield machine with the cutting wheel on a kind of sled on cushions filled with nitrogen. Using steel plates laid out in the cavern, they maneuvered the shield around the tight bend, at the same time with exact precision in the smallest of spaces and without losing any time.

Then it was the turn of the six back-ups, which the Herrenknecht specialists had separated accordingly. One by one, they moved the back-ups on self-propelled modular transporters (SPMT) from the western to the eastern tube. There, in a section of tunnel that had previously been excavated conventionally, the Herrenknecht service team gradually put the shield machine and back-ups together again. They connected countless electrical and hydraulic lines and assembled screw and bolt connections until the TBM was able to be launched again for the fourth and final tunneling section in the eastern tube of the lower Filder Tunnel. “Everything went smoothly, but it wasn’t something you do every day. With our experience and our competence, we have optimally supported the customer in this project milestone.”

“I congratulate everyone on the jobsites between Stuttgart and Ulm on their magnificent success in pushing forward this important major project,” says Dr.-Ing. E.h. Martin Herrenknecht, founder and Chairman of the Board of Management of Herrenknecht AG. Mechanized tunnelling technology for efficient and environmentally friendly rail tunnel projects is part of Herrenknecht AG’s core business. In total, more than 810 kilometers of railway tunnels and around 2,200 kilometers of metro tunnels have been excavated by contractors worldwide using Herrenknecht tunnel boring machines.