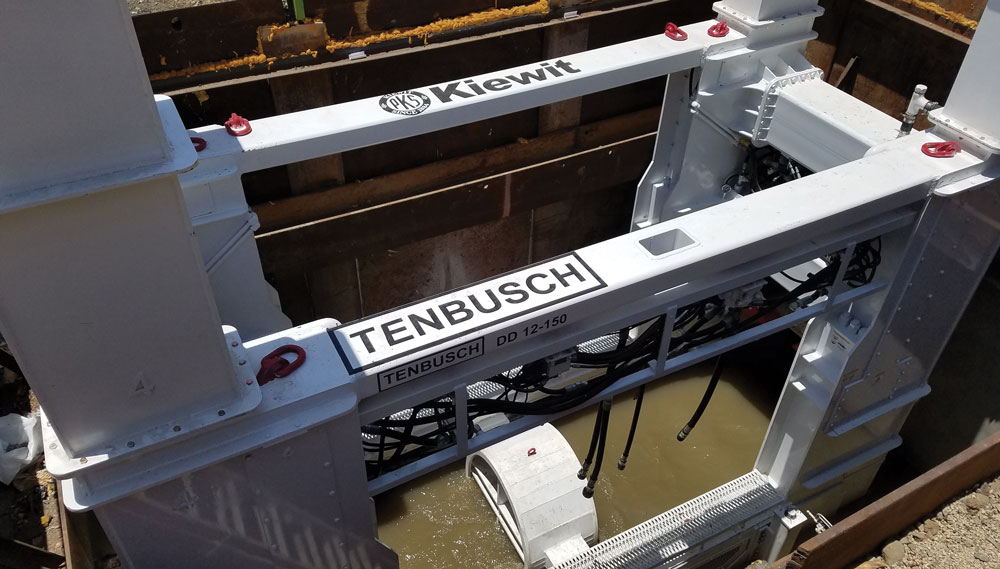 The DD12-150 sliplining jacking unit is ready for the installation of the new pipe.

Most large urban areas depend on interceptor sewers to convey sewage from subdivisions and suburbs to the treatment facilities. Whether the interceptor drains city neighborhoods or a neighboring town’s collection system, the pipe is large and usually deep. In an area like Los Angeles, interceptor sewers have been in use for a very long time.

The La Cienega Interceptor Sewer was installed in Beverly Hills and Culver City almost 100 years ago. The pipe consists of a profile (non-round) brick tunnel. It was common practice to tile the inside surface of the tunnel with clay tiles made and installed specifically for the profile of the pipe. Over the years the tiles have survived unharmed by hydrogen sulfide gas, however, the mortar that held them in place has all but disappeared, rendering damage to the ceiling of the tunnel in many places. For that reason, the decision was made to slipline the tunnels with a pipe product that will be unaffected by hydrogen sulfide gas.

The La Cienega Interceptor Sewer Rehab Project consisted of 11,500 ft of nominal diameters 39, 42 and 63 in. Kiewit Infrastructure West was the contractor who performed the work. Kiewit installed AMIREN pipe, a fiberglass reinforced polymer mortar pipe supplied by Thompson Pipe Group and manufactured by Amiantit in Poland. The pipe joints had a laying length of 9 ft. The profile of the new pipe closely matched the profile of the existing tunnel. The sliplining equipment, including the 12DD-150 sliplining machine, as well as the prover mandrels and hydraulic power unit, were manufactured by Tenbusch Inc. in Lewisville, Texas.

As sliplining challenges go, the La Cienega Interceptor Sewer was pretty standard. At first glance, sliplining an existing pipe with a new pipe looks like it ought to be easy. But following are conditions that complicate this seemingly straight-forward task.

Because of the normally large size of the interceptor tunnels, it is always preferred to work wet, also referred to as “live” since the line is not taken out of service. Bypass pumping the flow would require locating hoses on the surface. It is not normally acceptable to locate hoses on the sidewalk in front of a local business or on the grass in front of a residence. The volume of sewage that is conveyed by these kinds of conduits is almost always too much for bypass pumping.

When hydraulic equipment is working in live sewage flow, it is imperative that standard hydraulic oil not be allow to enter the flow. Tenbusch equipment is commonly shipped with environmentally safe hydraulic oil. For this work in Los Angeles, the contractor required it. When working wet, the operator of the machine and any other employees in the pit must be tethered to preclude their falling into the live stream of sewage. The velocities are sometimes substantial and therefore dangerous. In order to allow the operator the maximum mobility while operating the machine, the machine was operated with a wireless control panel attached to the operator’s belt.

The existing pipe normally has a substantial amount of debris lying on the bottom of the pipe. The new pipe cannot be inserted through the old pipe without thoroughly cleaning the existing line of all debris. In some cases where the pipe has deteriorated, the amount of debris can be problematic. 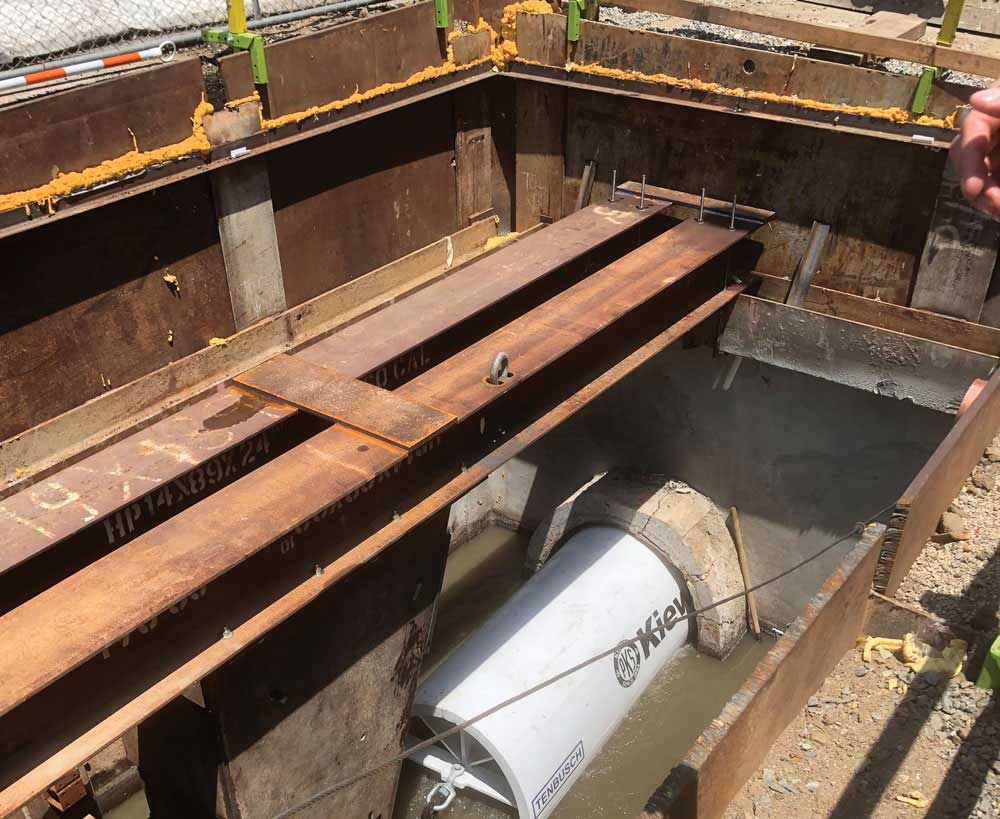 The temporary frame used to support the cable sheave and pulling cable.

As is often the case where the existing tunnel has been repaired in the past, the inside surface sometimes loses its continuity. This can occur when repair crews place a round pipe as a patch in a non-round tunnel. If this condition occurs, a slipliner might not pass through the repair section. Because this is common, it is always necessary to drag a prover mandrel through the line in preparation for the insertion of the new pipe. The mandrels must be configured to the shape and diameter of the new pipe. Prover mandrels are always constructed of steel and must withstand the stresses of being pulled in either direction as the line is proven acceptable for the new pipe. It must allow the flow of sewage through its structure as it is pulled and pushed.

The sewer gas escaping from the collection system during the work must be fully controlled. The creation of work pits and lateral connection excavations all allow the escape of sewer gas. Because of the importance of this detail and the cost of controlling the escaping gas, it is extremely important that the pipe be sliplined with as few pits as possible. The limited amount of pits, along with the machine’s ability to simultaneously push both ways, dramatically reduced the cost to control sewer gas.

The existing interceptor lines are always deep and are located below the elevations of other utilities servicing the area. It takes a great deal of planning to locate the insertion pits. It might seem obvious that the length of the pit is critical. However, because of the presence of parallel utilities, the width of the pit is also critical. The Tenbusch DD12-150 Sliplining jacking unit requires a pit of only 17 ft in length and only 9 ft in width. The Tenbusch jacking unit pushes the new pipe in both directions from the same pit without any extra setup.

Before the new pipe can be pushed, the joint must be “made up.” This refers to the important detail of pushing the new pipe spigot into the previously set pipe’s bell. Because the joint uses a gasket, it can take a fair amount of thrust to push the spigot into the bell. The Tenbusch Jacking Unit features a set of hold down clamps on each end of the machine to hold the bell while the spigot is inserted. This allows the crew to quickly and efficiently join the pipes and continue on with the sliplining process.

The owner of the line required that the jacking equipment have a thrust capacity of 150 tons. The owner also required that the jacking thrust be limited to 150 tons. Referring to the thrust, the owner of the line also required a digital chart record of the jacking forces applied to each pipe as it was inserted into the tunnel. The Tenbusch DD12-150 Jacking unit fed data, via a wireless connection, to the laptop computer in the project manager’s truck, giving real-time data for review by the inspector and for use later in reports to the owner.

Due to underground utilities, right of way issues and existing structures, the 11,500 lf of slipliner could only be installed using 12 pits throughout the length of the sewer line. Also, at every pit location there were existing utilities that couldn’t be relocated so the area available wouldn’t allow for a large pit. Due to the limited amount of space to install pits, some of the pipe runs had to be up to 1,700 ft long.

The contractor required that the Tenbusch Jacking Unit used on this job have a thrust capacity of 150 tons, but still had to be built so that it could meet the weight requirements and size requirements to be transported on city streets without extensive disassembly and reassembly. The Hydraulic Power Unit also had to meet CA-AQMD Tier 4 Final clean air requirements. Because the equipment was being used in a live stream of sewage, the contractor required the use of environmentally safe hydraulic oil.

The first phase of the La Cienega project included approximately 3,000 ft installed from a single pit. With the ability of the machine to push in both directions at the same time, it was finished in just four days. During the four days, the crew set averaged 100 pieces of pipe pushed per day. 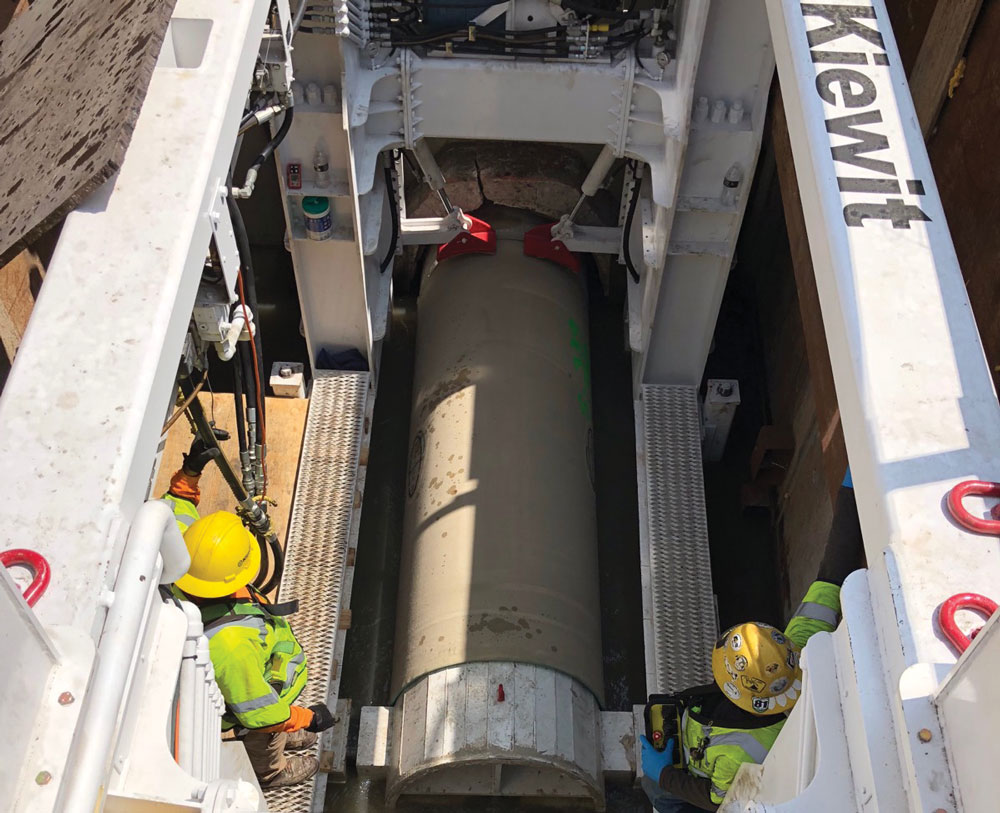 The new pipe being pushed. The machine makes a complete 12’ stroke in just one minute and twenty seconds.

The Tenbusch Jacking Unit could be demobilized from one access pit and reinstalled in the next access pit in the same 8-hour shift using the same crane. The short joint length of the new pipe and the small footprint of the Tenbusch 12DD-150 made it possible to install all of the new pipe with only 8 moves of the machine.
In the 11,500 ft there were 40 laterals, ranging in size from 24 to 8 in. Two of them were too large to reconnect under flow conditions. The two large laterals were performed by cutting in a factory tee (from Amiantit) and then concrete encasing the connection.

Like so many tasks in life, the devil is in the details. The specialized equipment and the Well-trained and well-managed crew made a great combination and the job was completed on time.