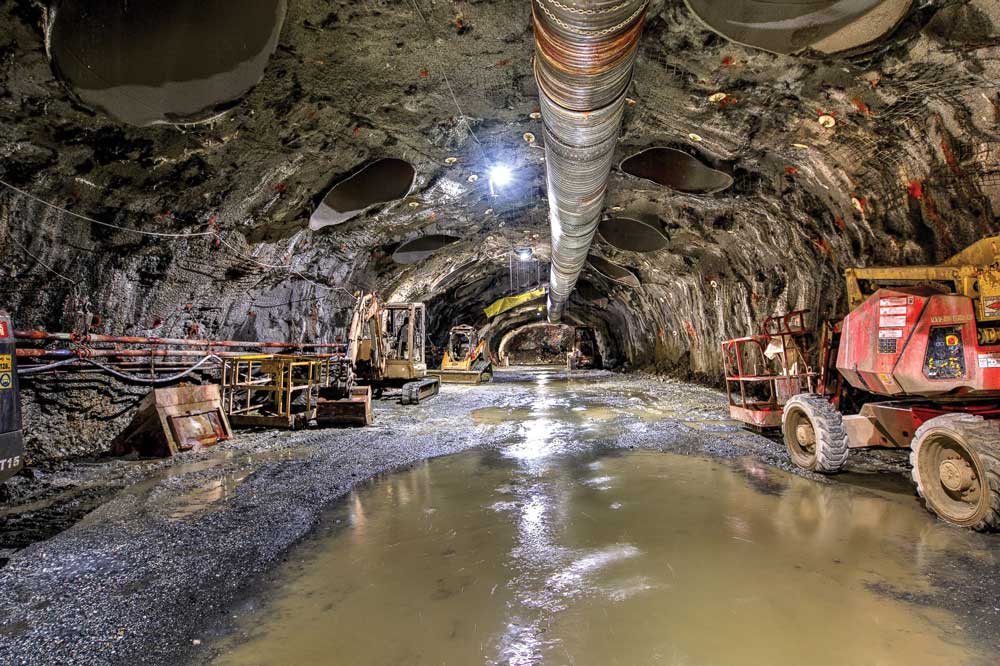 Over the past two decades, the Colorado River Basin has experienced significant drought conditions that have decreased the average annual flow of the river by about 30 percent. Lake Mead, the nation’s largest man-made reservoir and primary water storage facility for the Lower Colorado River Basin, currently contains 38 percent of its 26-million-acre-foot capacity. In addition to possibly triggering a federally declared water shortage on the Colorado River, Lake Mead’s declining lake levels jeopardize the Southern Nevada Water Authority’s (SNWA) ability to access its primary water supply and operate its two existing pumping stations that withdraw water from the lake.

In response, SNWA completed construction of the Lake Mead Intake No. 3 project in 2015. The project consisted of constructing a three-mile, 20-foot diameter intake tunnel beneath the lake and is now in service. In 2014, SNWA convened a citizens advisory committee to develop recommendations on the next phase of the project, SNWA’s Low Lake Level Pumping Station (L3PS). The citizen committee’s recommendation was clear: Move forward on construction of the pumping station in the swiftest time frame possible to ensure the reliability of the community’s water supply. Once completed, L3PS will work in concert with Intake No. 3, enabling SNWA to continue treatment and delivery of the community’s primary water supply, even if lake levels continue to decline to critically low elevations.

Due primarily to the urgency in completing the project, SNWA implemented the Construction Manager at Risk (CMAR) delivery method for the L3PS project.

At an estimated cost of $650 million, the L3PS project includes a 535-foot deep by 26-foot diameter shaft; a 377-foot long by 33-foot wide by 36-foot high modified horseshoe-shaped forebay; 34 deep-drilled well shafts that are 96-inch diameter with 72-inch diameter steel casing; deep-set high capacity custom submersible pumps; a dual 144-inch diameter aqueduct system; and an electrical substation to provide 69kV and 13.8 kV for pump station operation. Construction started in 2016, and underground work, including the well shafts and forebay, were completed in late 2018. The project is slated for completion in 2020.

The first and foremost benefit of CMAR delivery method starts with qualification-based selection, in whole or in part of the selection criteria, to identify the contractor that is the “best fit” and has the appropriate personnel for the project.

For underground projects, the primary and inherent risk is the uncertainty of the ground conditions. Even with extensive geotechnical investigations – if the ground is highly variable – there remains significant uncertainty, which was the case with L3PS. Nevada state law requires a minimum of 25 percent of the construction valuation to be self-performed by the CMAR contractor. This resulted in attracting prime contractors that specialize in underground work and clearly understand the risks involved. It is a significant benefit having the general contractor with the personnel responsible for controlling the primary risk during construction at the table – or should we say at the construction trailer – with the project owner and engineer to evaluate and determine the best approach for the work.

SNWA initiated a Qualifications Based Selection process for the CMAR candidates immediately after Board approval to move forward with the project, and Barnard of Nevada, Inc. was selected. The selection process took four months and was completed just prior to the engineer of record, MW/HILL (currently known as Jacobs and Stantec joint venture), completing the 50 percent design for the project’s underground package. The project was then divided into separate work packages, phasing construction as each segment was completed. 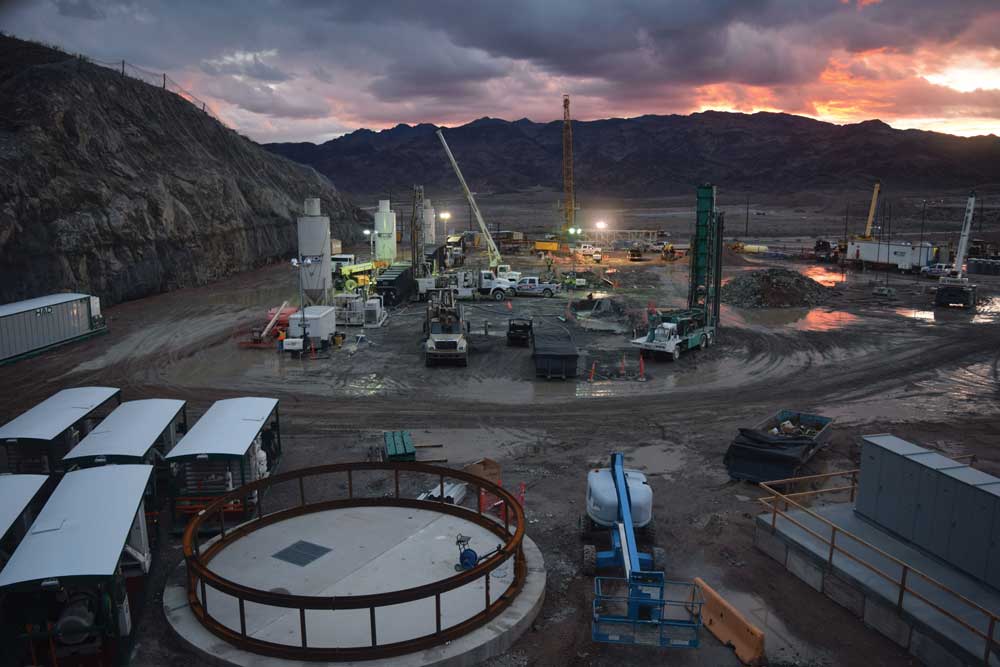 The overall project included both underground and above ground elements. To facilitate an early start of the construction work, a surface blasting contract was awarded by SNWA under a separate agreement. Next, the main pumping station was split into two main phases and awarded as a CMAR contract containing multiple work packages. Once the CMAR was selected, they immediately became engaged in the project and began evaluating the constructability of the draft 50 percent design package for the underground works. After reviewing and coordinating potential design changes proposed by the CMAR, it was confirmed the original design concept was preferred. The entire team – the owner, engineer, and CMAR – co-located office space and continued working as an integrated team throughout the design phase.

When the design for the underground work package was approximately 90 percent complete, the work was priced, including sub-contractor scopes of work that were put out to bid by the CMAR. The CMAR and SNWA began negotiations, after two independent construction estimates were completed and all three estimates were reconciled. Once the price for the underground work was agreed upon, the SNWA Board of Directors awarded a lump sum construction contract to the CMAR, with payment allowances for the pre-excavation grouting and other services. Because the CMAR was involved in the detailed design, they fully understood the scope of work and initiated work immediately. The total duration from the start of design to the beginning of underground construction was only nine months. This facilitated an early start to the project and successful completion of the interim milestone in late 2018. The remaining above ground work continues, and because of the successful timely completion of the undergrounds works, the entire project remains on schedule for completion in 2020. 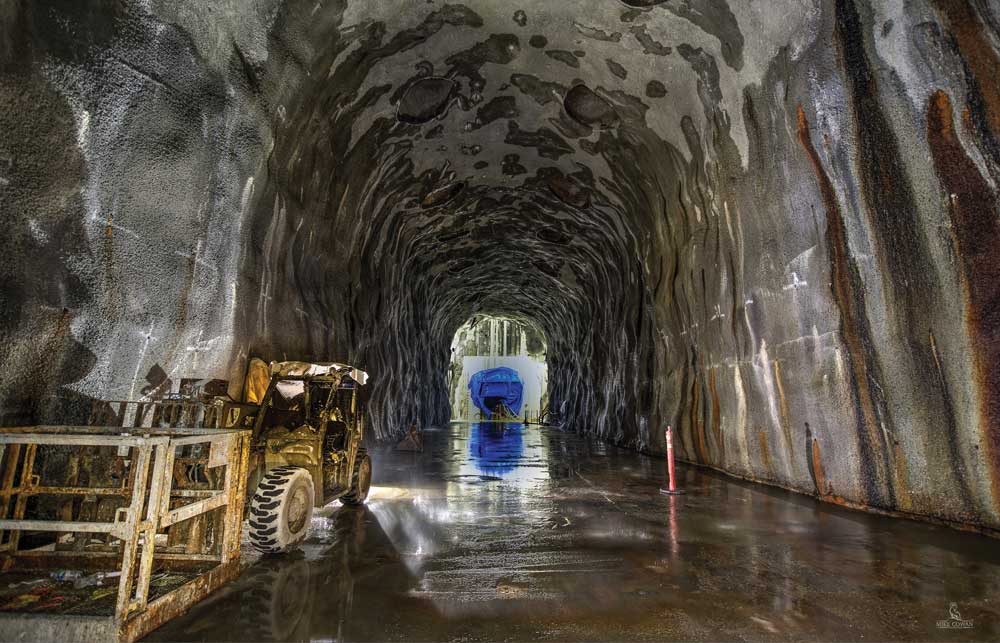 The project implemented a comprehensive risk management program with a shared or single project risk register for the entire duration of the project, beginning in the planning phase throughout the construction phase. The team members worked together to evaluate contractor-specific means and methods; address potential risk mitigation measures; and develop optimum design and construction alternatives as the design progresses. The CMAR provided pricing and schedule analysis for various alternatives so the team could make informed decisions on the final design.

During the detailed design phase for the underground work package, the CMAR coordinated with potential drilling sub-contractors to discuss both blind bore and raised bore drilling methods for the 96-inch diameter well shafts. Each drilling company shared their input on the challenges, pre-excavation grouting approach, drilling approach, and risk mitigation measures. The CMAR team evaluated the wide range of feedback received from the prospective contractors, evaluated the known difficult ground conditions, and reviewed the strict verticality tolerance for the 500-ft deep drilled well shafts before deciding to allow bids for either drilling method to be submitted. The original bids from the subcontractors did not provide a direct comparison between the two methods because variables existed with each. To develop a true comparison of the bids, the CMAR evaluated the bids and adjusted the overall cost to include any items omitted, including the pre-excavation grouting campaign and schedule impacts that differed between the options. Additionally, the team evaluated the risk mitigation measures to be implemented and other potential impacts to the remaining construction activities. The cost and schedule for each option was evaluated, and the owner selected the blind bore method.

Although its base bid price was slightly higher, the blind bore method reduced overall risk and impacts to the project. North American Drillers, LLC was selected as the drilling sub-contractor. The CMAR included the owner and the engineer during this entire sub-contractor selection process, so there was increased understanding of the risks, buy-in on the mitigation measures, and transparency in the pricing.

Fully Integrated Team Approach – Bringing it All Together:

During the pre-construction services phase, the owner, engineer and the CMAR worked together as an integrated team. As the design progressed, the team used its good judgement and past experiences to evaluate the ground conditions in the Geotechnical Baseline Report (GBR). Their goal was to determine the best approach for construction based on the anticipated ground behavior. Additionally, the team developed risk mitigation measures and pricing and payment provisions. The detailed pricing was completed at the 50 percent and 90 percent design phases. A cut/add sheet was then developed to track changes and adjust the 90 percent to approximately 100 percent. The assumptions for the ground overbreak, water inflow, and other baselines and conditions were agreed upon by the team and factored into the overall project cost. The draft GBR developed by the project engineer was modified at the end – as agreed by the team – to reflect the majority of the assumptions included in the cost estimate. 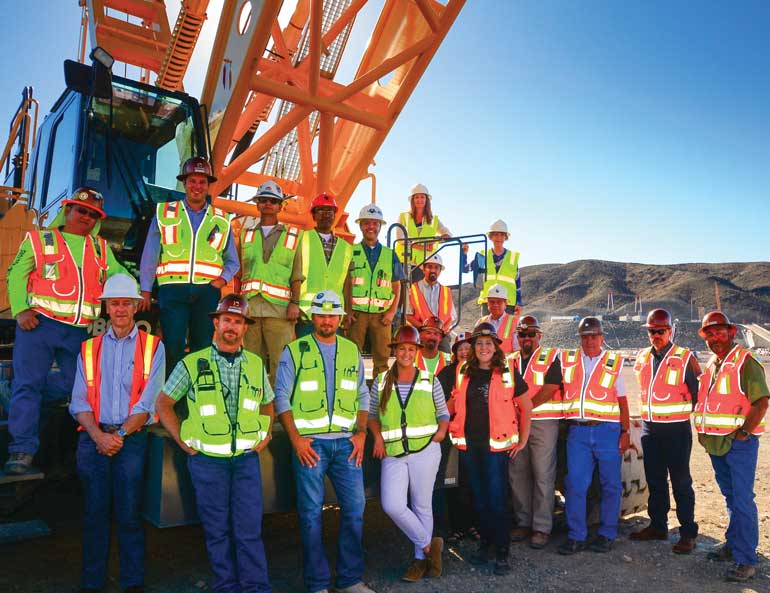 On past underground projects, SNWA has implemented both contractor-directed and owner-directed (or CM-directed) pre- and post-excavation grouting programs. The benefits of CMAR allow for early evaluation of the ground conditions and discussions among the team on best to approach the work. For L3PS, the ground conditions included highly fractured, clay-filled faults; potential high-water pressure and high connectivity; and unstable characteristics of the weak to hard underground rock. The team decided it was in the best interest of the project to incorporate the CMAR’s preferred approach to the pre-excavation grouting program required for each the surface drilling and also for the drill-and-blast potions of the underground work. In the end, the technical specifications, payment terms, and allowance items were all developed as a team effort to implement the CMAR’s preferred approach while providing provisional sums to compensate the contractor for the costs of the actual pre-excavation grouting needed. As a result, there were no claims for differing site conditions for the underground work package.

The underground work package was successfully completed in December 2018, keeping the overall project on track for swift delivery as recommended by SNWA’s citizens committee. Crews continue work on the above ground work package, installing pumps and preparing for the pumping system start-up and commissioning. The CMAR delivery method has delivered on its promised benefits. The underground work package was successfully completed on budget, within time, and without any claims for differing site conditions. The overall project continues to be on schedule and is currently running under the budget. The team agrees that one of the biggest contributions come from strong leadership that set the tone and the individual team members committed to making it all happen.