You are at:Home»News»SR 99 TBM Gears Up for Final Stretch 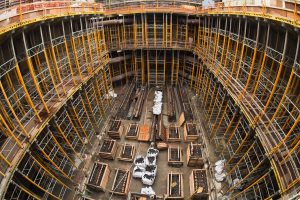 This October 2015 photo shows progress on the pit that the SR 99 tunneling machine will break into after boring under downtown Seattle. (WsDOT)

Seattle Tunnel Partners has temporarily stopped mining to prepare Bertha, the SR 99 tunneling machine, for the final 1,000 ft of the 9,270-ft tunnel drive, the Washington State Department of Transportation reported on March 1.

Crews stopped mining Feb. 28 to verify the TBM’s position along the tunnel route before making their final push to the disassembly pit. Recent surveys show that Bertha may be several inches off of the tunnel alignment. STP is conducting additional survey work and will make adjustments as needed to complete the tunnel drive.
Adjustments are common during tunneling, including on this project. STP made a similar adjustment to correct Bertha’s course after crews mined out of the pit that was used to access and repair the machine.
RELATED: Seattle Ship Canal Tunnel Posts Final Supplemental EIS
Crews will continue to perform routine maintenance on the machine for the next several days. They plan to resume mining the week of March 6.
According to STP’s most recent schedule, Bertha will arrive at the disassembly pit in May. The pit is located approximately 960 ft north of the cutterhead’s current location beneath Denny Way and Sixth Avenue North. Mining rates will continue to vary based on maintenance needs and soil conditions.
Crews successfully mined under the final building of the tunnel drive earlier this week. Bertha has traveled a total of 8,310 ft and built 1,270 of 1,426 concrete tunnel rings.
RELATED: Seattle Voters Approve ST3
Share. Twitter Facebook Google+ Pinterest LinkedIn Tumblr Email
Previous ArticleSound Transit East Link Tunneling Progressing
Next Article J & J Boring Completes Microtunneling Project for City of Memphis