You are at:Home»News»Train Testing Underway on Southern Part of Crenshaw/LAX Line 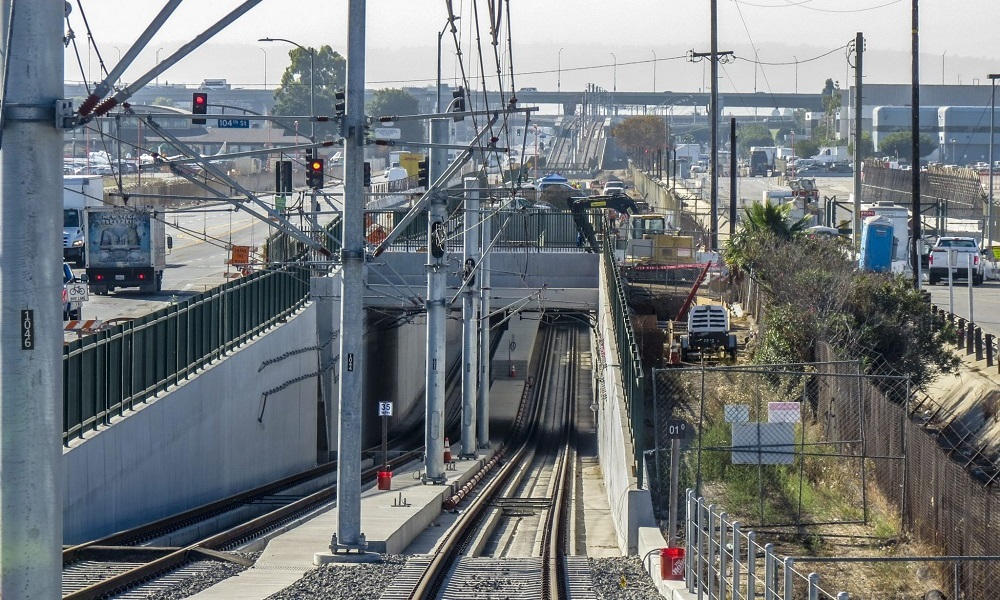 The Crenshaw/LAX Line reached a nice milestone recently with the beginning of train testing on a 1.4-mile segment of track adjacent to LAX — the southernmost part of the project.

In that segment, trains are now being powered by the overhead wires and reaching regular speeds. Signal and systems testing began in September, when a train first traveled from the Green Line tracks onto the new Crenshaw/LAX Line tracks. The overall project is 93 percent complete and we’re definitely seeing progress — although there is still work, testing and training to be done.

Earlier this fall Metro and Walsh Shea Corridor Constructors (WSCC) — the contractor building the project — performed clearance testing. At very slow speeds, a train car was outfitted with foam shells on its side to ensure the vehicle cleared all structures such as platforms and other equipment that are next to the tracks. Staff inside and outside the train made sure everything worked as it should. That included keeping an eye on the overhead wires and the pantograph — the “arm” mounted on the roof of the train to collect power from the wires.

The testing has been successful so far and couldn’t have been done without diligent work of both Metro and WSCC staff.

The Crenshaw/LAX Line began construction in 2014. An opening date hasn’t yet been announced but substantial completion is expected in 2020. The 8.5-mile, $2.1-billion project — with underground, street level and aerial sections — will run between the Green Line and Expo Line with eight new stations. Separately, a ninth station will be built at Aviation Boulevard and 96th Street and will provide connections between Metro Rail and the future LAX people mover that will serve airport terminals.