You are at:Home»News»Tunnel Contract Finalized for Scarborough Subway Extension 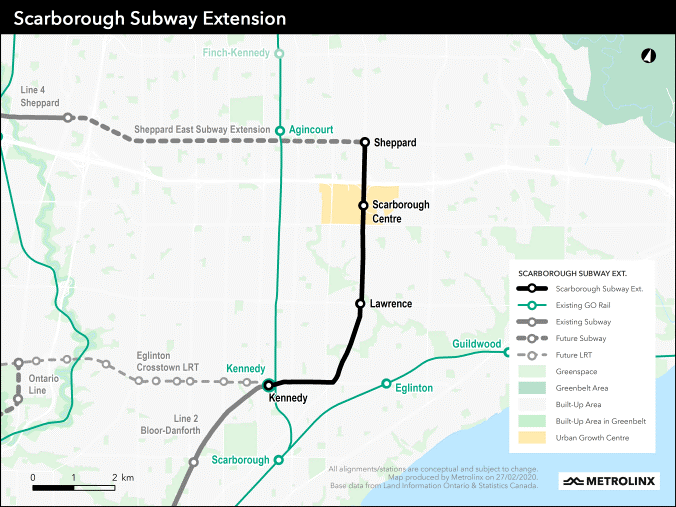 The highly anticipated Scarborough Subway Extension is picking up pace and long-discussed plans are becoming a reality now that the contract for advanced tunneling has been finalized.

The three-stop Scarborough Subway Extension is moving quickly toward breaking ground on major construction now that a contract has been finalized with Strabag for the project’s tunneling work.

The 7.8-km subway extension will bring reliable and seamless transit further into Scarborough and, once complete, will help reduce gridlock by attracting more than 100,000 riders each day. It’s a key pillar of the Ontario’s historic $28.5 billion subway expansion program, which also includes the Ontario Line, the Yonge North Subway Extension, and the Eglinton Crosstown West Extension. Together, these projects will add more than 40 km of new subway service to the rapid transit network.

To deliver the project as quickly as possible for the people of Scarborough, Metrolinx and Infrastructure Ontario have split up the delivery of the project into two contracts – the advanced tunnel contract and a stations, railway and systems contract.

This builds on the progress Metrolinx and Infrastructure Ontario made earlier this year when they identified Strabag as the team they were in final negotiations with on the advanced tunnel contract. As part of this contract, Strabag will be responsible for designing and constructing the tunnel for the Scarborough Subway Extension. This includes designing and building the launch and extraction shafts and supplying the tunnel boring machine. The community will even have a chance to weigh in on a name for the tunnel boring machine later this year.

Strabag, as a consortium, is made up of a mix of international and local companies who have extensive experience working on other major tunneling projects in Canada and around the world. The companies that make up Strabag include the following:

Once they were first identified First Negotiations Proponent, Metrolinx and Infrastructure Ontario wasted no time in getting agreements in place with Strabag to ensure that they could carry out early works at the launch shaft site, located at the northeast corner of Sheppard and McCowan. This site is where the tunnel boring machine will descend into the ground to begin the tunneling process. Since April, Strabag’s crews have disconnected utilities, began clearing structures and set up office trailers to prepare for construction. 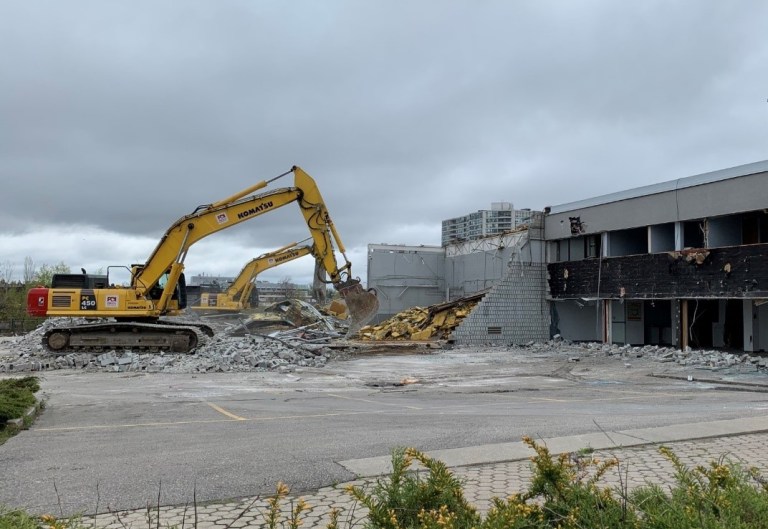 Preparatory works underway at the launch shaft site, located at the northeast corner of Sheppard and McCowan (Metrolinx photo)

Now that all aspects of the advanced tunnel contract have been finalized, work continues at the launch shaft site to prepare for the massive excavation required before the arrival of the tunnel boring machine early next year.

As work progresses quickly, Metrolinx will continue to keep the community informed about progress and what to expect during every phase of construction. A virtual townhall is being hosted on May 31 to provide the latest project updates and answer any questions from the community.

“Since day one, our government has been clear that building better, faster transit is a key priority and core piece of our mandate. Under Premier Ford, Ontario’s historic multibillion-dollar subway plan for the Greater Toronto Area (GTA) is, by far, the largest and most ambitious transit undertaking in Canadian history.

Earlier this month, the federal government endorsed Premier Ford’s vision for transit in the GTA and committed their 40 per cent share to Ontario’s nationally significant subway projects. They agree that our plan is the right plan.

Today, Infrastructure Ontario and Metrolinx have awarded a $757.1 million contract to Strabag to design, build and finance the tunnel for the Scarborough Subway Extension. Preparatory works at the launch shaft site started in April and major construction is set to begin in June.

For far too long, Scarborough commuters have unfairly dealt with outdated transit that couldn’t keep up with the growing and thriving communities in Toronto’s east end. The Scarborough Subway Extension will create thousands of jobs during construction and unlock better access to employment spaces, schools and other key destinations throughout the city.

The three-stop subway extends service from Kennedy Station to Sheppard Avenue and McCowan Road, providing quick and seamless transit for those heading in and out of the downtown core and those travelling within Scarborough.

With two experienced teams – Strabag and West End Connectors – and the federal government’s new funding commitment of up to $10.7 billion, Ontario is pushing ahead with the successful delivery of our four priority transit projects.”