You are at:Home»News»International News»Twin Robbins Crossover TBMs to Bore on Mumbai Metro Line 3 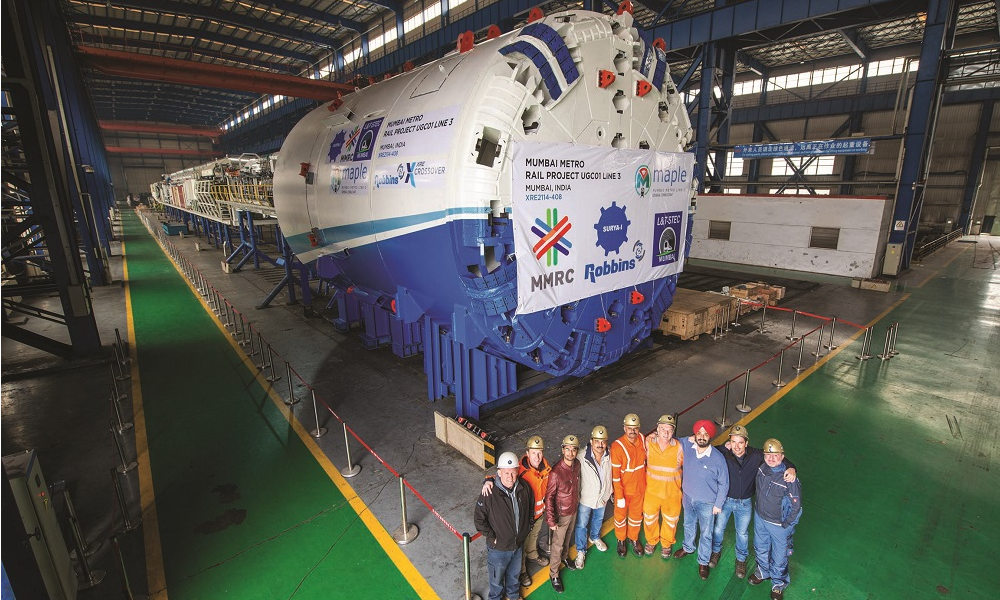 On June 11, 2018, a Robbins Crossover XRE destined for Line 3 of India’s Mumbai Metro arrived in Mumbai port following a successful factory acceptance test in April. The machine, combining features of a hard rock Single Shield TBM and an Earth Pressure Balance TBM, is one of two 6.65-m (21.8-ft) Crossover machines that will bore under contract UGC-01.

Operation of these two machines will be carried out by Larsen & Toubro, part of the Larsen & Toubro -Shanghai Tunnel Engineering Co. Joint Venture (L&T-STEC JV). The Robbins Company will provide key personnel for the initial boring phase. “During the factory acceptance testing, we observed that the machine and back-up system are robust enough for hard rock tunneling,” stated Palwinder Singh, Head of Tunnel Operations for L&T-STEC JV.

During the bores, consisting of parallel 2.8-km (1.7-mile) tunnels, geologic conditions will include mixed ground and possible water pressures up to 2 bar. According to Singh, “A Crossover XRE was chosen because of the expected geology,” which includes basalt rock and transition zones consisting of black carbonaceous shale, tuff, and breccia. Rock strengths are anticipated to range between 15 MPa and 125 MPa (2,200 and 18,100 psi) UCS. The machines will bore with only 15 to 20 m (50 to 70 ft) of cover above the tunnel and the structure will be lined with reinforced concrete segments in a 5+1 arrangement.

The metro tunnels will run between the Cuffe Parade Station and Hutatma Chowk station, passing through the Vidhan Bhavan and Church Stations. Both Crossover machines will be launched from the same 25 m (82 ft) deep by 22 m (72 ft) long shaft at the Cuffe Parade Station. “The limited length of the shaft requires running the TBMs for the first 100 m (328 ft) with some or all the back-up decks at the surface,” said JP Bayart, Robbins Project Engineer. “The TBMs and back-up systems are connected with umbilical cables and hoses.”

The TBMs will begin their excavation in hard rock mode. “Each cutterhead is optimized for operation in rock, as this is what is expected. The machines can also operate in soft ground thanks to the screw conveyor with bulkhead gate and discharge gate,” said Bayart. “The Robbins Torque-Shift System, consisting of two-speed shifting gearboxes coupled to the main drive motors, allows for the high cutterhead torque required for soft ground operation.”

The face of each machine is equipped with six muck buckets and six large internal muck loading plates. This design, in combination with the screw conveyor located at the centerline of each machine, will allow for the option of fully emptying the cutterhead chamber, resulting in minimal wear when EPB mode is not required. Muck will be removed from the tunnels via muck cars.

Assembly and launch preparations for the first XRE TBM began on June 20 and are estimated to take about six weeks. The second Robbins XRE TBM underwent factory acceptance testing at the end of May and will arrive at the jobsite at the end of July for its assembly. “Our target is to achieve an average of 250 m (820 ft) of boring per month,” said Jim Clark, Robbins Projects Manager India. “The target to complete the boring operations is 20 months, which includes the additional time required for the short start-up using umbilicals on the initial drives, dragging the machines and re-launching through three stations.”

Contractor L&T plans to work crews on double shifts to cover a full day of operations in order to keep to this timeline. The machines will join two Robbins Slurry machines boring a separate contract of the Mumbai Metro Line 3. The first of those machines will be launching in August 2018. The Metro Line 3 project as a whole is estimated to be completed by 2021.