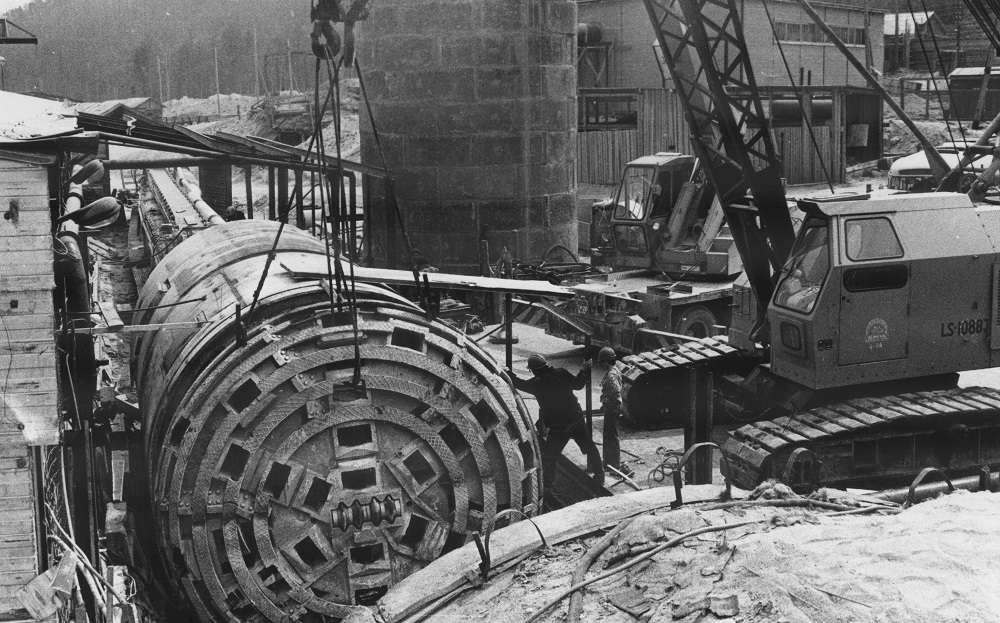 The original 4.56 m diameter Double Shield machine was supplied for the Severomuysky Service Tunnel in 1979.

In 1979, a 4.56 m diameter Robbins Double Shield TBM was delivered to bore the Severomuysky Service Tunnel, a 15.3-km long railway through the remote mountains of Siberia. Now, 40 years after the original machine was delivered, Robbins is returning to the role. Two 10.37-m diameter Crossover (XRE) TBMs will bore the second Severomuysky Tunnel, clocking in at 15.5-km long and running through mixed ground and fault zones.

The new rail line is needed due to limitations on carrying capacity on the current Baikal-Amur Mainline (BAM) railway through the area. Currently 16 million tonnes of cargo are carried through the existing Severomuysky tunnel but the Russian Government wants to increase cargo carrying capacity by more than six times in the region.

The largest global anthracite producer, Sibanthracite Group, is taking on the tunnel construction with management by VostokCoal Management Company. The companies, owned by Dmitry Bosov, aim to increase coal transport by up to 100 million tonnes per year through the addition of the second tunnel.

“Robbins has established itself on the market as the best manufacturer of hard rock machines, which are able to provide the maximum penetration rate in hard rock. This is one of the determining factors in connection with the tight deadlines for the implementation of our project. Also, Robbins is the only manufacturer to build the Crossover TBM,” said a representative of Sibanthracite Group. Other aspects of the supply include a continuous conveyor for muck removal, rolling stock, spare parts, and cutting tools.

Sibanthracite Group chose Crossover technology for a number of reasons, geology being chief among them. “A Crossover type tunnel boring machine was selected for tunneling due to the fact that the construction of the tunnel will be carried out in difficult heterogeneous geological conditions (from unstable waterlogged soils to hard rock). The Crossover is able to operate in two modes: Open mode, used while boring in hard rock formations, and closed mode (with earth pressure balance), used when boring in unstable water-logged soils,” said the Sibanthracite representative.

The lessons learned during the first Severomuysky tunnel—the importance of probe drilling, consolidation grouting, and preventing a shielded machine from becoming stuck in fault zones or squeezing ground—are all part of the Crossover TBM solution. “I was a young engineer working at Robbins when the Double Shield TBM was delivered for the first tunnel, so it is a special honor to bring this new technology to the second Severomuysky Tunnel in Siberia,” said Robbins President Lok Home. “Per the contract Robbins is supplying Crossover TBMs for the new parallel rail tunnel—these machines are made to bore in highly variable ground conditions while maintaining good advance rates. With our latest technology we hope to again prove TBMs are the better choice over drill-and-blast when difficult ground conditions are to be encountered.”

The machines will be designed for varying water pressures, ranging from 5 to 20 bar. They will feature Water Inflow Control, a system that seals off the face and periphery and creates a safe working environment in which to dewater and consolidate ground. The machines will feature probe drill ports and capabilities for 360-degree probe drilling and grouting ahead of the excavation face, while the Robbins Torque-Shift System will enable the machines to bore through collapsing ground and other situations that demand high torque. The machines will also be designed with a belt conveyor in hard rock mode that can be switched out with a screw conveyor when crossing into soft ground.

Crews will bore through the Severomuysky Ridge, a mountain range in Buryatia and part of the Stanovoy Highlands, which separates the basins of the Upper Angara and Muya Rivers. “The second Severomuysky tunnel is located in one of the most geologically active areas of our planet—on the northeastern flank of the Baikal rift zone. The region is characterized by high seismic activity, difficult geological and hydrogeological conditions against the backdrop of a harsh climate (the summer period lasts only 80-100 days, temperatures from + 39°C in summer to -58°C in winter). The construction work on the portals is complicated by the presence of permafrost as well,” said the Sibanthracite representative. Construction of the new tunnel is expected to begin in 2020 and take five years.