You are at:Home»News»UCA Representatives Tout Tunnels on Capitol Hill 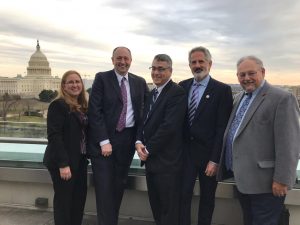 Representatives from the Underground Construction Association (UCA) of SME joined American Society of Civil Engineers (ASCE) members from all 50 states, Washington, D.C., and Puerto Rico March 13 for ASCE’s Legislative Fly-In.  The annual event provided a platform for UCA members to share with congressional decision-makers the importance of tunneling and infrastructure construction.

The day started with a briefing for those attending the Fly-In on strategies and “dos and don’ts” of talking with lawmakers and their staff. Armed with informational materials including ASCE’s Infrastructure Report Card, participants split up to meet with their individual state senators and congressional representatives.  In addition to the Report Card, UCA members left a copy of the History of Tunneling in the United States book that showcases the impact the U.S. tunneling industry has had on the country’s transportation and water infrastructure networks.

“UCA has always been interested in getting our voice heard by lawmakers, and we are fortunate to partner with ASCE in making it a reality,” Goodfellow said. “With infrastructure being a popular topic, the lawmakers that we met with were very receptive to our message.”