Designing and constructing underground structures and tunnels is always a challenge. Mother Nature deals a different hand for each and every project, and the location and function of the structures can present unique challenges as well. When designing an underground station, sometimes these challenges can be magnified. For example, stations are typically only needed in urban areas where the likelihood of third-party impacts is high, existing structures abound adjacent to the worksite, and real estate for construction staging is in short supply. And regardless of the location, creature comfort, efficiency, safety and aesthetics need to be factored into the equation.

To get a closer look at some of the considerations and challenges related to underground station design, TBM: Tunnel Business Magazine talked to experts from Dr. Sauer & Partners. Founded by Dr. Gerhard Sauer in 1979, Dr. Sauer & Partners has more than 100 tunneling projects on its resume and was involved on some of the pioneering New Austrian Tunneling Method (NATM) – also known as Sequential Excavation Method (SEM) – projects in Europe and the United States.

Currently, the company is involved on a range of underground construction projects that include new construction and renovation. Specific projects include the Bond Street Station Upgrade and Bank Station Capacity Upgradefor London Underground, and new stations for the Ottawa Light Rail Tunnel, San Francisco Central Subway, and Toronto Eglington Crosstown.

“What all the underground stations have in common is that they are located in urban areas, whereas tunnels can be anywhere – in a city or under some mountain far out in the countryside,” said Christian Karner, Senior Tunnel Engineer and Partner with Dr. Sauer & Partners. “As such, third-party impacts are a significant concern. You are dealing with utilities, buildings, bridges and roads, so the first thing you need to do is compare the expected settlements with how much settlement the existing structures can take. If the settlement exceeds acceptable levels, then you need to design mitigation measures.”

Mitigation measures can include using ground improvement techniques to support the ground, or by using an observational approach that includes monitoring as the excavation progresses. “In urban construction, you need  to give special consideration to how you are going to deal with the existing structures – do you need to pretreat the ground? How are you going to monitor? That is vastly different from a project in a rural area,” said Franz Wilhelmstoetter, SEM Tunnel Engineer with Dr. Sauer & Partners.

In addition to settlement and possible impacts on existing structures and utilities, minimizing disturbance to the public and businesses is an important aspect for design and construction of underground stations. Specifically noise, dust and vibration need to be controlled. Traffic impacts, not only related to street closure but also traffic needed to move construction equipment and materials and remove muck, need to be taken into account. In cases where stations on existing transit systems are being renovated or added, there is the additional complication of keeping trains in operation without impeding passenger access and egress. 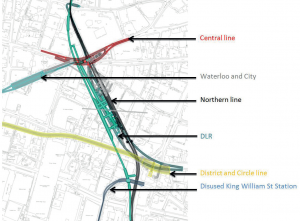 London is in the midst of a transportation building boom. The massive Crossrail program, which adds 73 miles of commuter rail to the Capital, recently awarded  its final major contract and is on pace to begin service in 2018. Additionally, High Speed 2, a $73 billion program to link London with the northern cities of Birmingham, Manchester, Sheffield and Leeds, is tendering design and build contracts.

In order to keep pace with the transportation traffic, London Underground is in the process of renovating key stations to allow access to new service, relieve congestion and expand capacity. Dr.  Sauer & Partners is currently working as the contractor’s designer for the Bond Street Station Upgrade and the Bank Station Capacity Upgrade.

The Bond Street Station Upgrade is a £150 million project awarded to CoLOR, a JV between Costain and Laing O’Rourke. Bond Street station was first opened in 1900 as part of the Central London Railway. A further major upgrade was carried out in the 1970s with the construction of the Fleet Line (now Jubilee line) running north-south, 13 m deeper than the Central line. The Bond Street Station Upgrade scheme will provide essential congestion relief by means of a new station entrance and satellite ticket hall, and additional escalators, lifts and passageways.

The Bank Station Capacity Upgrade is a £560 million project awarded to Dragados. The station is located in the City of London’s financial district. It is a key interchange served by five lines. The Bank Station Capacity Upgrade aims to relieve heavy passenger congestion during peak hours for boarding, alighting and interchange. The capacity upgrade comprises the construction of a new southbound platform tunnel and associated length of running tunnel for the Northern line, connecting passageways to the existing station tunnels, and the provision of step-free access from King William Street. The total length of the SCL tunnels is 1,200 m with tunnel cross sections that range from 10 up to 90 square meters.

“In London, the biggest challenges we face are the existing structures in the vicinity of stations,” Karner said. “In these cases we are excavating in proximity to live subway lines, and that brings a different element to the design. Architects have a desire to create large underground openings, but in London that is not possible. You have to make do with the space that is available while fulfilling user and operational requirements.” 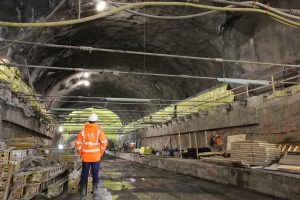 The Confederation Line is a new light rail service traversing Ottawa being built by Dragados/SNC Lavalin/Ellis Don. The line spans 7.7 miles with 13 stations, and includes a 1.6-mile long tunnel under downtown with three mined stations. While the Ottawa stations were new constructions and didn’t have as many restraints as the London projects, they nonetheless came with their own unique set of challenges.

The architectural drawings called for large-span station caverns to be created. However, the location of the Lyon and Parliament stations under Queen Street were restricted in width due to the presence of deep basements of high-rise buildings on either side of the street. Utilities near the surface and the desire to keep traffic unimpeded called for an innovative solution.

“Because of the width of the span and the presence of the basements, there was almost no native ground to work with,” Karner said. “Additionally, we were working near the rock-soil interface at the cavern crown, which led us to use a pipe roof system instead of conventional rock bolting because the exact interface location was unknown.”

The sequencing of construction was also unique, Wilhelmstoetter added. “The station was built from the bottom up, which is not typical for a metro station. Because there was so little rock, we needed to basically build our own foundation and work up.”

The Rideau Station was a different story. Built at the rock-soil interface, crews began the station excavation in rock using roadheaders. From there, they switched over to using excavators in the soft-ground area using traditional soft-ground mining techniques. “That was quite interesting in that we had a little bit of everything in a short stretch of ground.” Wilhelmstoetter said. 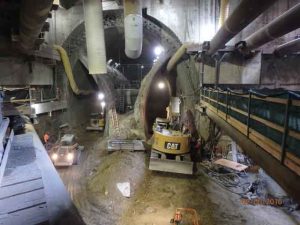 The Central Subway project is an extension of San Francisco MTA’s Third Street light rail project that will bring transit service to popular areas including the Moscone Center and Chinatown.  The 1.7-mile underground line features three underground stations, including the Chinatown station. Working as a subconsultant to the SFMTA’s consultant (WSP-PB/Kwan Henmi/Michael Willis JV), Dr. Sauer & Partners’ work involved conceptual, preliminary and full detailed design of the underground caverns, egress tunnels and mined shafts, as well as other support services.

“The Chinatown station was very challenging in that it was located in a very dense urban area with a limited laydown area for construction,” Karner said. “They took down one existing building that basically serves as the entrance shaft. On the other side of the street, there is a building built on spread footings, which required mining very close to the existing structures. “

In advance of the excavation, a monitoring program and compensation grouting program were implemented with pre-installed pipes set in place to create heave in the event of ground loss. In the case of the Chinatown station, excavation began after twin TBM running tunnels were constructed, requiring the contractor to remove tunnel segments in the cross-section.

In underground transit station design, Dr. Sauer & Partners is seeing more of a shift toward large caverns, particularly in North America. Mined stations are popular compared to open-cut stations because it minimizes the impacts to the near-surface utilities. Of course, the depth of the station and geology are important considerations in determining the excavation approach.

“Designing and constructing large caverns requires the use of multiple drifts to control the face,” Wilhelmstoetter said. “Using NATM it is still possible to create the underground space, but it is more complicated with more steps involved.”

Additionally, design-build contracts for station construction are also more common, just as they are on tunnel contracts. Design-build delivery has been shown to accelerate project schedule, which not only reduces impacts on business and residents, but also allows for revenue service to begin more quickly.