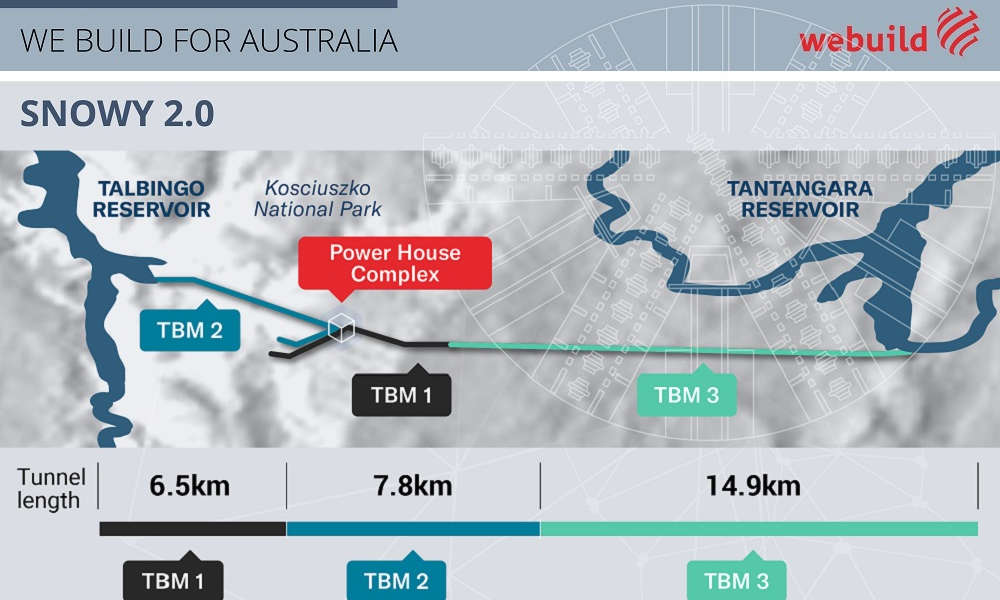 Webuild and its partners in the Future Generation joint-venture celebrated with Australia’s Prime Minister and Snowy Hydro Ltd the commissioning of Kirsten, the most technologically advanced of the three tunnel-boring machines (TBMs) deployed for the development of the Snowy 2.0 pumped-storage scheme, the largest renewable energy project in Australia.

Built specifically for Snowy 2.0 by Germany’s Herrenknecht AG in collaboration with Webuild, the TBM, named after Australian astrophysicist Kirsten Banks, highlights the innovation that Webuild brings to every project. In Australia, Snowy 2.0 will underpin Australia’s transition to a renewable energy future.

TBM Kirsten is a single-shield, open-mode machine designed to deal with hard rock conditions. Its most innovative feature is its ability to excavate at steep angles: up to 9% (five degrees) on declines and up to 47% (25 degrees) on inclines.

With a diameter of approximately 11 m, the TBM can excavate up to 30 m of rock per day. At 205 m in length, it is one of the longest of its kind in operation in the world. It will be responsible for the Emergency, Cable and Ventilation Tunnel, Inclined Pressure Shaft and 2km of the Headrace tunnel – more than 6 km of tunneling.

With a track record of more than 2,400 km of tunnels, Webuild’s expertise in the sector also led it and its consortium partners to win recently a tunnelling and highway contract on the North East Link in Melbourne. As the largest private-public partnership for an infrastructure project in Australia, it will provide an essential link in the city’s freeway network, reducing congestion and travel times for motorists.

Approximately 1,400 people are working on Snowy 2.0, with 150 local businesses involved. Approximately 4,000 jobs are expected to be created during the life of the project.

Built by Future Generation – a joint venture between Webuild, Australian partner Clough and Lane Construction, a U.S. subsidiary of Webuild – Snowy 2.0 will link the existing Talbingo Reservoir with Tantangara Reservoir through a network of tunnels.

Set in the Snowy Mountains, it will provide 2,000 megawatts of fast-start, dispatchable energy and provide 350,000 megawatt hours of large-scale storage, enough to power the equivalent of 500,000 homes for over a week during peak demand. It will reduce volatility in the power market, support reliability and bring down power prices for families and businesses.