You are at:Home»News»International News»Webuild Wins €651M Brenner Base Tunnel Contract 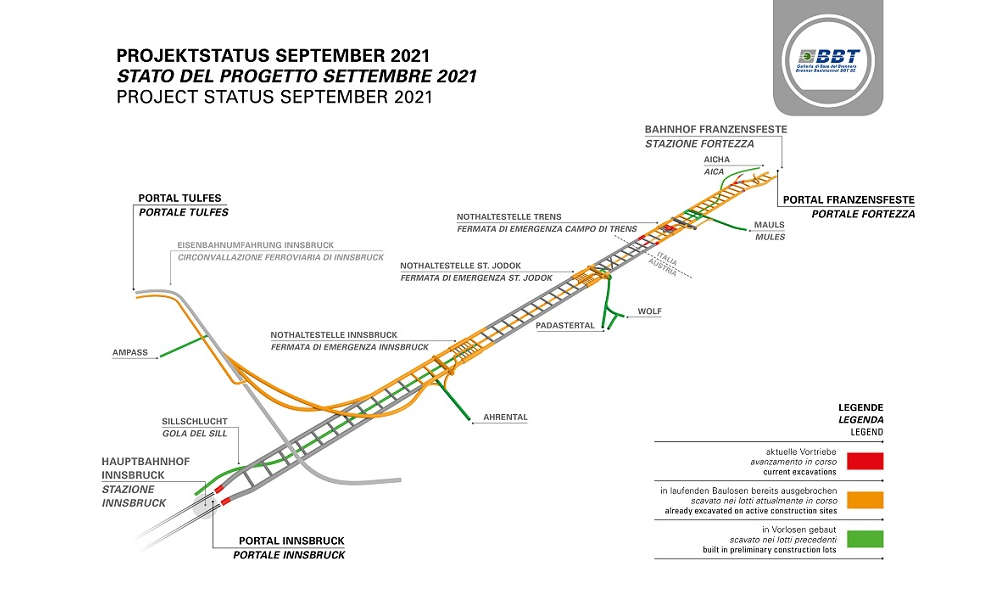 The Webuild Group and its Swiss subsidiary CSC have won Lot H41 Gola del Sill-Pfons of the Brenner Base Tunnel project for a value of €651 million (~$740 million US). The Group has a 50% stake in the joint venture with Swiss partner Implenia (50%). The joint venture was awarded the contract by BBT SE, a European public limited company created for the development of the railway tunnel between Italy and Austria under the Alps.

The lot, which will employ 400 workers directly, increases Webuild’s involvement in the development of the Brenner Base Tunnel, which will become the longest railway tunnel in the world at 55 km, one of the most complex projects given the mountainous terrain, thereby confirming the Group’s expertise in tunneling with a track record of approximately 2,400 km of underground work. Webuild is working on other lots of the Brenner Base Tunnel, including the Isarco River Underpass and the Mules 2-3 lot after having completed Lot Tulfes-Pfons for BBT. Webuild is also working on the railway between Fortezza and Ponte Gardena south of the tunnel in the mountain.

The newly awarded Lot H41 foresees a section of the Brenner Base Tunnel in Austria and consists of the construction of the railway from Gola del Sill near the city of Innsbruck in the north to the town of Pfons located further south. The contract includes both the traditional method of excavation for the two parallel tunnels for approximately 7.3 km, including auxiliary tunnels as well as the mechanized method of excavation for another 16.5 km, in addition to the lining of the walls of completed tunnels, an underground emergency stop at Innsbruck, access tunnels, exploratory tunnels and parts of other secondary tunnels.

The mechanized method will deploy two tunnel boring machines (TBMs), among the most sophisticated in the sector, with a diameter of more than 10 m. The design of the project focuses on the environmental sustainability of the project during construction: the logistics of the work sites are designed to reduce travel times for the transport of materials, and measures to reduce dust and noise are foreseen.

The Brenner Base Tunnel will be crucial for Europe. It will be a key part of the Scandinavian-Mediterranean Corridor of the Trans-European Transport Network (TEN-T) that will connect Helsinki in Finland and La Valletta in Malta. It also plays an important role in connecting Italy and Austria with a high-speed/high-capacity railway.

Webuild is a global leader in infrastructure for sustainable mobility. In Italy, it is working on some of the most important projects in transport, including the high-speed railways between Naples and Bari in southern Italy and Verona and Padua in the north. It is also building the Terzo Valico dei Giovi-Nodo di Genova between Milan and Genoa.